When Smyrnaios (2018) mentions the term “infomediation”, he is emphasizing that, through controlling the Internet, oligopoly controls the source of knowledge and money. What’s more, oligopoly’s vertical integration of information production also enables these Internet giants to dominant direct contact with users (Smyrnaios, 2018). That’s why businesses and media publishers join the game to make profits from people’s attention. In another conference paper, Smyrnaios (2012) put forward the term “social infomediation” indicating that social platforms like Facebook and Twitter are becoming major news infomediaries that attract traffic to media websites. Consequently, the social infomediation, businesses, media publishers and the users are all players and each plays a role in shaping the network structures on social media. So what are their roles? 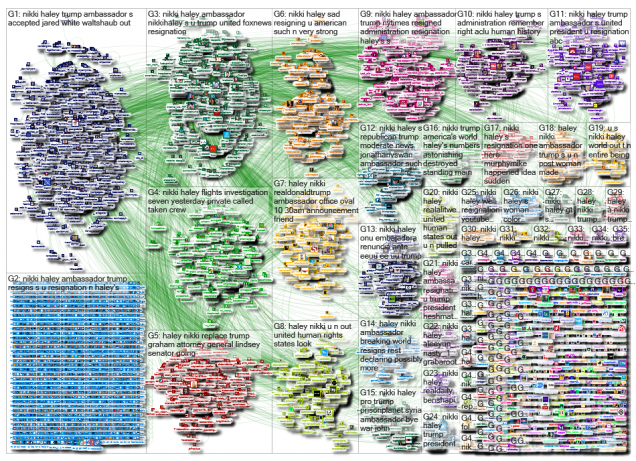 The Nikki Haley graph on Oct 9th. Retrieved from: http://bit.ly/2ysh4pK

Smith, Rainie, Shneiderman, and Himelboim (2014) propose the idea of six conversational archetypes on Twitter conversation networks. Let’s take a look at two graphs and analyze how they are affected by these players. For instance, the Nikki Haley graph on Oct 9th indicates a broadcast network structure including 14, 563 Twitter users whose recent tweets contained “Nikki Haley”. Smith et al (2014) believe that breaking news often leads to a broadcast network structure on Twitter, with users repeating prominent news and media organizations tweet (Smith et al, 2014). Nikki Haley, the 29th United States Ambassador to the United Nations, caught users’ attention since she announced her resignation on that day. Many prominent news media, like the New York Times, Fox News, and Washington Post, reported this breaking news and plenty of users retweet their reports on Twitter. These media publishers are still influential. This could be deducted from the fact that most of the top 10 URLs Tweet in this graph are from prominent news media. Twitter does become news infomediaries in this case.

What is also worth mentioning is that, in a typical broadcast network, the members within the clusters are only connected to the source of information without connecting to one another (Smith et al, 2014). This is a different case. There are several groups highly interconnecting to each other, which is the feature of another structure, tight crowd. The implication is that Nikki’s resignation is an issue of vital concern to people from different communities and political camps. Besides news media, Nikki Haley herself and other celebrities, like President Donald Trump and Senator Chuck Grassley, also tweeted about this news. Given that they are the top influencers in this graph, many users also retweeted their tweets, thus making these influencers into centers of the clusters as well. Consequently, compared to a typical broadcast network, there are more small clusters instead of one or two prominent communities.

Moreover, the keyword “trump” appears far more frequently than any news media, indicating that influencers on Twitter could affect public opinion to a higher degree than professional journalists do. As Rainie and Wellman (2012) point out, “professional elite producers no longer hold a monopoly on content creation and dissemination” (p. 204). However, in this case, the influential users are still political elites who have a large number of followers. In this era of social media, the number of followers is a new form of social capital to influence public opinion. However, in this new round of information jockeying, the rule is as always under the control of elites. Admittedly, elites with better connections or higher educational level are more likely to create high-quality content thus accumulating more followers as their power to influence. As a result, although nowadays the lines between information consumers and creators are blurred, most people are directly empowered to express opinions but are indirectly disempowered to influence and the others only proliferate content by clicking “retweet” without providing any insight. 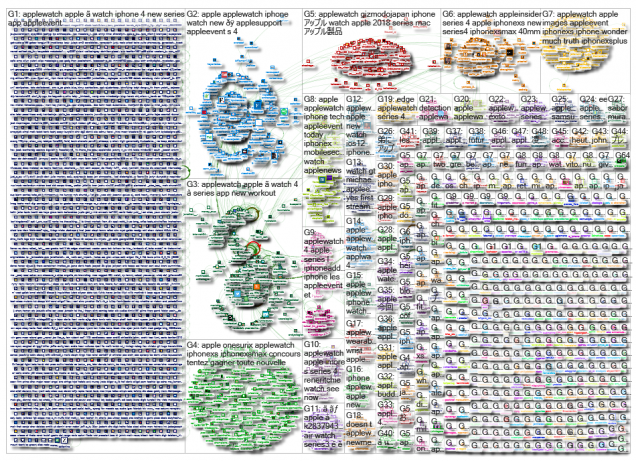 The #applewatch graph. Retrieved from: http://bit.ly/2PrCr1O

When it comes to the network structure in the #applewatch graph, it is a typical brand cluster structure. To begin with, the largest group on the left side of the graph consist of those isolates not connecting with each other. In addition, some subgroups are formed based on languages such as French and Japanese since Apple have Twitter accounts in many languages to promote their products to Apple fans worldwide. Moreover, relevant top hashtags are Apple’s other products like #iphone and #ipad, while the top influencers are Apple’s service accounts or publishers cooperating with Apple.

So what is happening here? The relationship between the infomediation platform (Twitter), publisher, business (Apple), and users is interesting. Social infomediation provide platforms; media publishers are sponsored by businesses to provide professional content; the last but not least, users share content. As a result, platforms only contribute to proliferating the content by the magic button “retweet” without providing new content. It seems like daily matters but it causes problems. First, it results in plenty of repetitive and redundant information (Smyrnaios, 2012). This is reflected in the graph that the keywords in different clusters are similar, indicating that they are repetitive content. Second, for users, there’s no exchange of ideas. That is so true. In this graph, since the contents are financed by Apple to promote the products rather than transferring knowledge, the isolates retweet with no insights without interacting with each other.

To sum up, infomediation and vertical integration do shape the network structures with different players influencing it in a different way. In addition, although the Internet blurs the boundary between content consumers and creators, it is difficult to say whether people are empowered in this process. However, I believe the ones who have taken the most advantage of infomediation must be tech and business giants together with elite influencers with strong social capital.