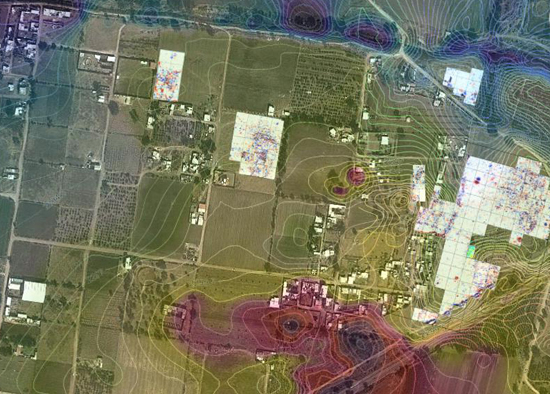 In progress geospatial mapping projects at the Tlajinga district.

Archaeologists classify Tlajinga as a district of Teotihuacan because of its presumed administrative functions within the civic hierarchy of the city. Covering approximately a square kilometer with some ninety multi-family apartment compounds, Tlajinga likely housed a population in the low thousands, organized into neighborhoods of frequently interacting residents. Several methods of geospatial research are aimed at understanding district and neighborhood-level organization. The research is being overseen by Luis Barba and the team from the Archaeological Prospection Laboratory at the Universidad Nacional Autónoma de México (UNAM).

A view from above is provided by high-resolution satellite imagery, which we are using principally in two ways: one is to look for linear features in areas south of the city that may correspond to buried canals used in floodwater irrigation; a second is to detect areas of the modern ground surface with white patches that could correspond to concentrations of calcium carbonate as decay product of the lime plaster used to cover more formal floors and structures, and seen more rarely at Tlajinga than at higher-status parts of the city.

On the ground we are using terrestrial methods of remote sensing, including magnetometry, ground-penetrating radar (GPR), and electrical resistivity. Since most of the construction at Teotihuacan used igneous rock, we have found magnetic gradient to be effective in covering large areas in outlining the plans and major interior partitions of compounds. GPR and resistivity, in turn, provide complementary lines of evidence for identifying cultural features and verifying the depths of deposits. Together, these methods provide an understanding of what lies beneath the surface prior to excavation and allows us to gauge variability in the size, spacing, and general organization of apartment compounds. 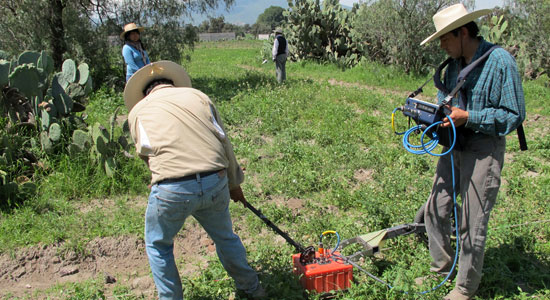