You many not think about it as you crunch your way to the bottom of the bag, but potato chip packaging says a lot about social class.  In this post, I’ll tell you about how the Boston University Gastronomy Program got community members thinking about chips + class, and then share a how-to guide for doing this activity yourself.

To center this activity in embodied learning (thank you, Food and the Senses!), we began with a potato chip taste test. (This was also a good way to attract people to our table.) 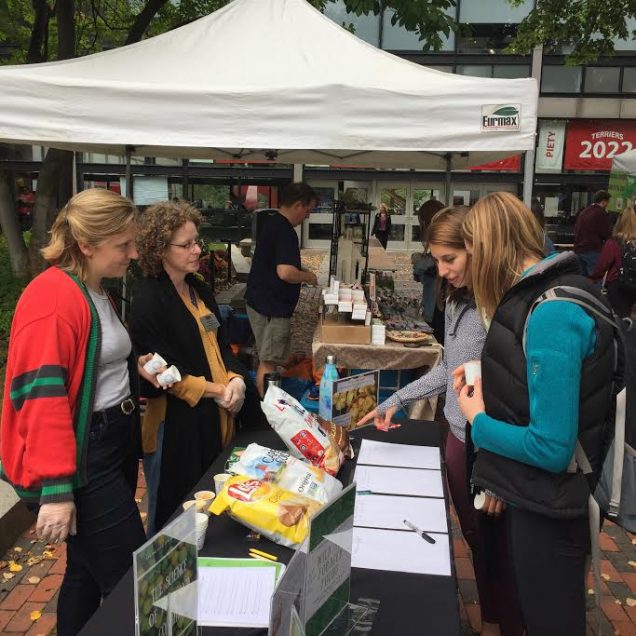 “Can you identify this potato chip?” we called to people passing through the market. “Test your potato chip knowledge!” we challenged them.

Those interested in participating were handed a blind sample of one of the chips in a Dixie cup, and invited to guess which bag it had come from. Most participants were able to eliminate two brands right away, ascribing LAY’S and Utz to one group, and Kettle and Cape Cod to another. The majority of tasters correctly identified at least one chip, and we rewarded them with BU Gastronomy-branded reusable straws.

Once we had gotten participants interested in our table and engaging with the potato chips, we encouraged them to take a closer look at the packaging in an activity adapted from Potter Palmer’s Food and Visual Culture class.

Could they identify markers of social- or socio-economic class on the potato chip packaging? Does the material or visual imagery of the bag itself convey an idea of a particular class or indicate a particular target customer?

The overwhelming response was: YES!  Here is a collection of responses we gathered from participants at the Farmer’s Market in Marsh Plaza on October 4th:

A lesser-known chip in this activity (it was a very regional brand until recently), Utz was nevertheless readily identified as a lower-class chip due to its heavy baseball imagery and large bag made of thin, shiny plastic.  This brand was also perceived as more patriotic as it was printed in red, white, and blue.

Participants were often stumped to find class markers on the Lay’s chip bag. Because the brand is so popular globally and was the most widely consumed chip in our participants’ daily lives, some tasters described it as ‘class-less.’

Others found a connection to the icon of the ‘typical’ American family.  When considering the LAY’S bag (as with Utz), participants expressed a belief that the ‘average American’ is lower class.  (It’s interesting and important to remember that this particular tasting took place at farmer’s market with many organic produce vendors on a University campus.)

The Boston location of this tasting meant that many of our tasters had vivid ideas and associations for Cape Cod. A beach vacation destination populated by second homes of the Boston suburban elite, Cape Cod was considered unequivocally upper class by our tasters.  These upper-class associations with the nearby peninsula were reinforced by the “Non-GMO” labeling on the bag, which participants picked up on.

When invited to consider the packaging of the Kettle brand potato chips, tasters translated high-class markers like “non-GMO” labeling into adjacent values not literally printed on the bag, including where they would expect to buy the chips (Whole Foods) and a variety alternative food movement causes. 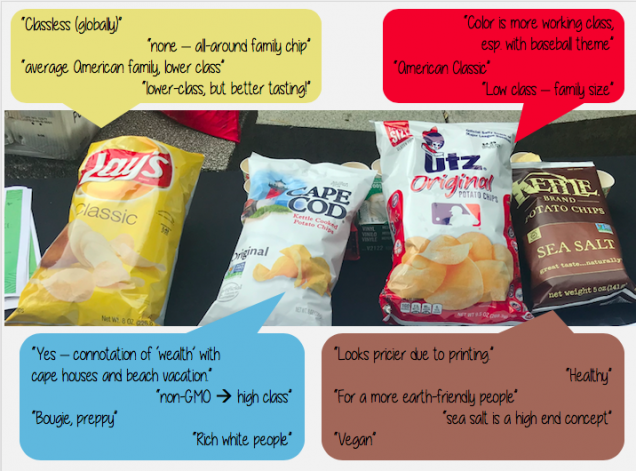 Want to host your own potato chips + class activity? Here’s a how-to guide, promotional poster, and response sheet to use or adapt for your own event. Be sure to let us know how it goes!