“Rape culture” is a hard pill to swallow for most communities but it is in fact alive in thriving in places closer to home than we might fully understand.  Growing up in a primarily Hispanic community, there is a certain level of masculinity that is perpetuated in an unhealthy, and an increasingly common way – this is the mentality that they can take what they want, when they want, regardless of permission.  As a disclaimer because this will obviously be a very sensitive and specific topic to discuss, this is not a generalization of all men in Hispanic culture; it is an observation supported in data and does not isolate Hispanic communities as the only men with these issues, nor does it say that all Hispanic men are of this character substance.

The photo below is that of Irinea Buendia, displaying a sign to call out the real killer of her daughter – her abusive husband.  Buendia’s daughter hung herself after years of trauma, both mental, physical, and sexual and was given no justice for the abuse that she suffered at the hands of her partner.  This is not an uncommon story. 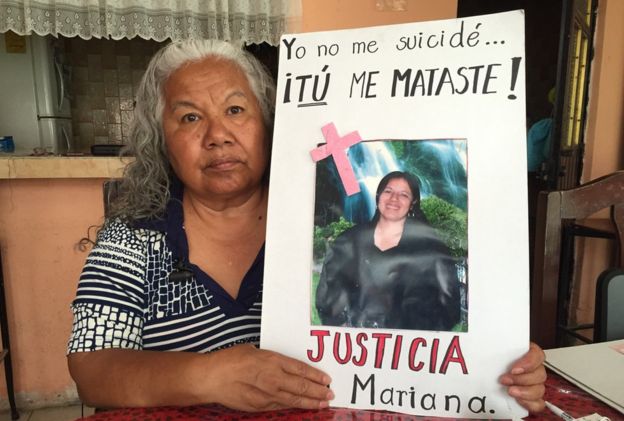 According to the Existe Ayuda, a nonprofit research and outreach program for women, especially victims of sexual violence, women of Latina descent and culture are increasingly more likely to be victimized by sexual violence in their lifetime than white women (Existe Ayuda, 2019) and because of this, Latina women are reportedly more likely to leave school and extra curricular activities to avoid being sexually harassed or assaulted.  According to the same source, married Latina women are less likely to report the violence they experience at home which is sexual, as rape because it is their partner.

According to an article in 1993, Lefley says that of three surveyed groups (white, African American, and Latina), Latina women were more likely to face sexual assault but were also more likely to receive ostracism from their communities for the attack/violence (Lefley, 1993).  The concept the article discusses is known as “victim-blaming” and is toxic in nature but also severely common in popular culture.  Women are subject to scrutiny in the face of sexual abuse by naysayers who insist that somehow the woman attacked is to blame for what has happened to her.  The Latino culture, especially the machismo (toxic masculinity) complex is partly to blame for victims of sexual violence having no outlet to discuss what has happened to them safely.  This is how we get cases like Buendia who had to bury her daughter because nowhere she went was safe for her.

According to Latina.com, there are numerous laws in place to ensure that women are continually victimized by their attacker – laws for instance that force them to carry pregnancies which are the result of rape, to full term.  There are also many cases like that of Buendia’s daughter, women who kill themselves because they have experienced injustice not only at the hands of their attacker but at the hands of their legal system which continues to support the men (attackers) versus the women (victims.)  The cry is being made that slut shaming needs to end in the Latina community and that there needs to a new practice of teaching consent rather than teaching women to behave a certain way in order to avoid being raped.  There also is a demand to end the pop culture support of sexual harassment in the streets (i.e cat-calling, obscene comments, etc.)

Per the same source, Latina women insist that sexual harassment in the workplace is a consistent and major problem.  There is an inability to feel safe in the workplace which could prove to be problematic when it comes to moving up with any sort of job/career.  The data I uncovered while researching this topic was shocking because it is made very clear that for almost 70% of Latina women surveyed, there is consistently a theme occurring – whether its the home or the workplace or trying to get to and from the grocery store, there are limited places for Latina women to feel safe and comfortable.

This research is significant to me because I was assaulted at age 13/14 by a Latino man and it was very clear because I knew his family and the community we came from, that not everyone in the social network we were a part of, behaved in this way.  In fact, the man who caused me harm was raised by men who were respectful to a fault.  What I see through my research now is that these may have been cases of secret abuse in the home or, a cross-contamination when it came to the raising of the young gentleman.  In any instance, there is a serious stigma placed on being a young woman in a Latino culture, probably nothing based on race, but more on the behaviors of these communities.  I am a white woman raised in a primarily Latino community up until September of 2018 and I say with confidence that while not all the men I encountered are like that, there is a substantial difference in treatment of women closer to Mexico versus closer to the Atlantic ocean.  I would be interested to see how the culture changes throughout the U.S and more so, how it looks when you’re in Latin countries.

What Rape Culture Looks Like in the Latino Community. (n.d.). Retrieved from http://www.latina.com/lifestyle/our-issues/rape-culture-examples?page=0,1