Denny’s writing, Radio Builds Democracy, is impressive when it comes to his attention on audience participation in a media research related to radio. “The medium is the message.” The message that radio, a one-to-many media technology, conveys is that political discourse is centralized in the hands of the speakers. However, American educators in 1930s saw the other side of the story: radio on the other hand also lowers the threshold of political participation compared to newspapers requiring literacy. As Denny (1941) points out, in the 1930s, the educators started forum discussion programs with audience participation as one way of educating the public for democracy. Meanwhile, audiences also formed small groups and thus building their social networks.

Then personal networks have rapidly expanded and after the emergence of social media, the growth is explosive. People began to worry about the possibility that the community is falling apart and people relying on the Internet is losing real-life contacts. However, Rainie and Wellman (2012) made a solid argument that people aren’t isolated by the Internet and they are building their boarder and diverse online networks. In addition, when Rainie and Wellman (2012) propose that there’s no distinction between people’s online and offline lives, the underlying implication is that online and offline relationships are not competing with each other, but overlapping and interacting with each other. People use social media to maintain real-life friends and call out an online date for a drink to deepen the feelings. In addition, people do not define a strong relationship based on which channel they are using, but on the content and frequency of chat conversation. For a strong relationship, what matters is not the number but the quality. The high cost of time and energy to build an emotionally intimate relationship never changes, thus naturally limiting people to form close relationships.

This explains why British anthropologist Robin Dunbar (2010) states that people only have “an inner core of five intimates”. On the other hand, Dunbar’s number, which suggests the human cognitive limit on network size, has been questioned by plenty of evidence from studies on different social media, like Facebook and Twitter. Now Facebook users have 500 or more friends on average, much higher than the number of 150 that Dunbar estimated. However, does it mean that social media increase human cognitive information-processing capacity? Given common sense, human brains do not evolve rapidly in 20 years. According to Dunbar’s Circles of Acquaintanceship, this large number of online friends belong to the outer layers or so-called weak-tie friends. Thanks to the lower cost of getting connected and exchanging information on social media, people are able to build far more weak ties.

So, how do weak ties matter? Early in 1973, Granovetter (1973) has found that weak ties are “an important resource in making possible mobility opportunity” by facilitating information flow. Granovetter (1973) made the example in the job market, which could also be applied to LinkedIn, the largest recruitment platform. Statistics show that 27% of LinkedIn users have between 500 to 999 first-degree connections (Statistic, 2016). Networks on LinkedIn are typically weak ties. Even though people can become first-degree connections, it’s still not appropriate to ask your first-degree connection for a job referral since you guys may never talk with each other. People intentionally exchange job information on LinkedIn and manage to switch career. The weak ties are reciprocal when it comes to information exchange. Moreover, Researchers also found that social media like LinkedIn is an emerging way for entrepreneurs to accrue social capital (Smith, Smith, Shaw, 2017). Weak ties do play a substantial role and are becoming increasingly important in an age of information asymmetry. 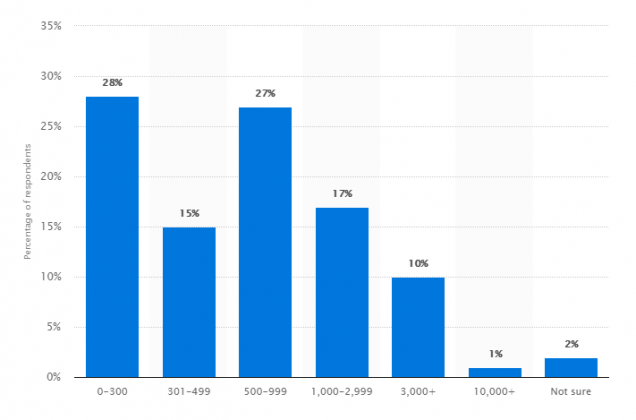 Dunbar’s number is not an exact number. Combining his Circles of Acquaintanceship, his theory of network size is the theoretical base of many social media platforms people are using now. Additionally, it is still inspiring for the users as well as the product managers of these platforms satisfying different social needs. For instance, when users first log in Facebook, they want to connect to real life friends and maintain the relationships (inner layers); then they polish their profile, form new acquaintances, and building social capital (outer layers). The layers are a great standard for users to distribute their energy of socializing on different types of relationships: close relationships require more energy while weak ties require less.

However, interestingly, these relationships on social media are no longer simply tiered. Close friends in inner layers, who are supposed to provide different kinds of support, might be absent due to long distance or financial situations, while outer layer friends may offer great convenience. Weak ties could suddenly become strong ties thanks to recent and constant contacts. With the average number of Facebook friends increasing, users might get more and more confused about the boundaries between layers, which lead to their unbalanced distribution of time on socializing. How could the platform help users to deal with it? How could the platform help to structure users’ social relationships? How could social media strengthen the strong ties like romantic relationship through special features? How could social media achieve the high conversion rate from weak ties to valuable information? Thanks to the cognitive limit of the human social brain, social media still have a lot of room for improvement.

Dunbar, R. I. (2011). How many friends does one person need?: Dunbars number and other evolutionary quirks. London: Faber and Faber.