The archaeology of early urbanism provides deep historical context for an increasingly urbanized world. Its study through the Proyecto Arqueológico Tlajinga Teotihuacan (PATT) involves collaborative investigations by an international team of interdisciplinary researchers at the ancient city of Teotihuacan, Mexico. During its height in the early first millennium CE, Teotihuacan was the largest city in the Americas and one of the largest in the world. Today it is a UNESCO World Heritage Site and welcomes millions of visitors every year. Although Teotihuacan has been studied by generations of archaeologists, there is still much we do not know about the city, its rise and fall, and what daily life was like for its many inhabitants. Teotihuacan is famed for its high level of civic planning, cosmopolitan populace, and broad economic reach, but better understanding such issues requires more intensive investigations within understudied portions of the city.

Investigations of the PATT focus on the Tlajinga district, a cluster of neighborhoods in the southern part of the city (map below) that was inhabited by a lower socioeconomic stratum, was the locus of intensive utilitarian craft production, and is bisected by the city’s central artery—named the Street of the Dead by the later Aztecs, who viewed Teotihuacan as a mythical place of origins and an archetypal city. Research goals of the PATT scale from the level of the household to the level of the urbanization of the city as a whole. They include understanding the tempo and processes of urban growth; the dynamics between central civic planning and neighborhoods; and the domestic economy and daily life of the common-status families who resided in the district and represent the urban experience for a majority of the city’s inhabitants. Please browse this project site and send us your feedback. 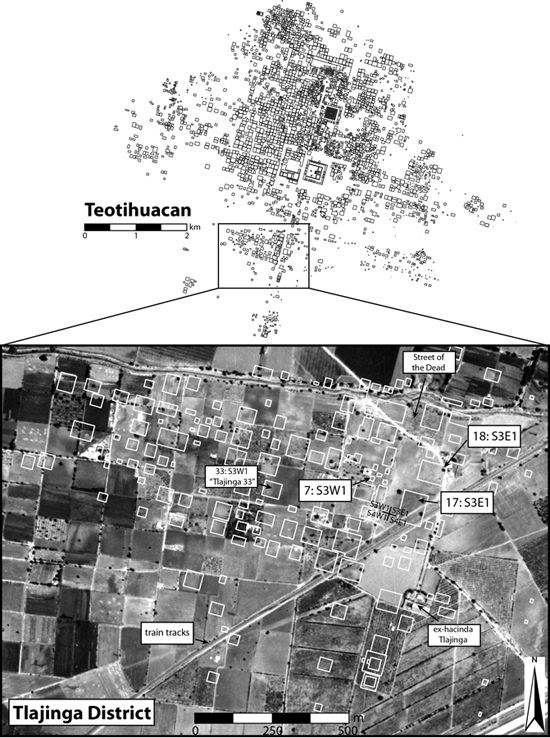 Location of the Tlajinga district at Teotihuacan.