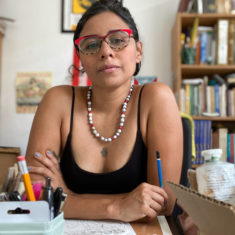 Sugeily Rodríguez Lebrón is an artist and co-director of the Puerto Rican collective AgitArte. Sugeily is an active member of Papel Machete and a highly skilled performance artist, puppeteer and visual artist. She has been a force and key cultural organizer on the ground in Puerto Rico as coordinator of Casa Taller Cangrejera, AgitArte’s cultural organizing space in Santurce. Su is a committee member of Titeretada, an annual event that celebrates world puppetry day. She worked as a temporary administrator of Pablo Casals Museum and together with Deborah Hunt administrated Teatro Estudio Yerbabruja until 2011. For more than 10 years she was Program Coordinator for the Festival Casals de Puerto Rico and Festival Interamericano de las Artes in the Corporation of Musical Arts. After Hurricane María hit, Su played a major role in organizing recollecting and distributing aid and food and coordinated with Papel Machete and other artists art workshops and performances with the Centros de Apoyo Mutuo (CAMs). She received her BA in History from the University of Puerto Rico. Su is from Gurabo and currently based in Santurce, PR.