Sofie Neu (born in 1992) studied art history and literary studies in Berlin and Vienna with a focus on visual studies, media and gender studies as well as dramaturgy at the acting school “Ernst Busch” Berlin. She is active in independent projects in figure, object and participatory theater as well as audio plays and currently working as dramaturg at the puppet theater in Magdeburg, Germany.

“Everything started with a newspaper article in the German magazine “Der Spiegel”: “Canadian quintuplets. The 500 Million Dollar Babies” told the incredible however true story of the Dionne quintuplets: “In 1934, Canadian Elzire Dionne gave birth to quintuplets – a sensation. The girls were taken into the care of the authorities, isolated and exhibited like animals in a zoo. A gigantic business for the state“. In 2019, Seth Tietze, Lina Mareike Wolfram, and Sofie Neu collectively developed a figure and object theatre piece in the Contemporary Puppetry Department at the Hochschule für Schauspielkunst “Ernst Busch” Berlin, Germany. Two puppeteers tell the story(s) of five supposedly identical girls, using a photo album, miniature worlds made of cardboard and Plexiglas, various cardboard figures, a cardboard mask, and baby dolls. The ever-present publicity, the girls are subjected to, is made palpable not only by the presence of the audience itself, but by a live camera. This article is a short version of a theoretical thesis in dramaturgy, related to the piece. It gives an overview of historical exhibition practices of human bodies, especially in North America and Germany in the 20th century, such as genre shows, world fairs, freak, and side shows in amusement parks as well as theme parks like “Quintland”. The main question is: Why and for what reason were the quintuplets publicly exhibited? Why seems figure and object theatre to be particularly suitable for dealing with this topic? Questions like these are raised, based on concepts within social sciences such as Othering, Objectification as well as theories from critical art history on the topic of colonial practices and the architecture of exhibiting.” 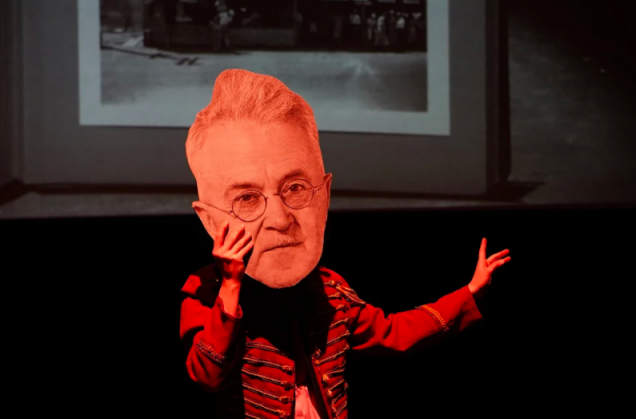