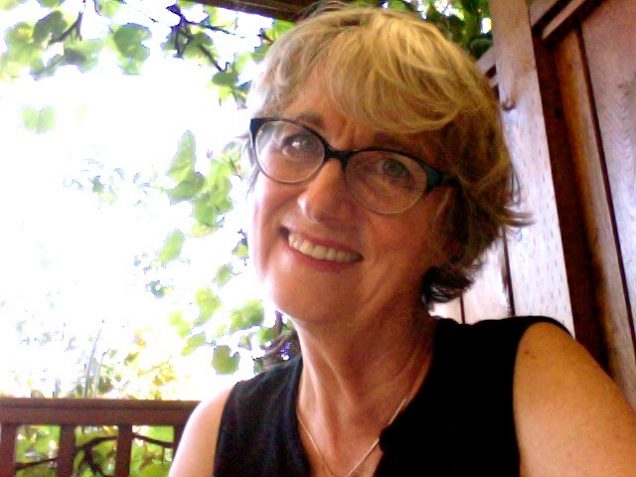 Melody Anderson (she/her) studied art at Camosun College in Victoria, B.C., and Emily Carr School of Art and Design  in Vancouver. She began making masks in 1980 under the mentorship of designer, Catherine  Hahn, for the horse-drawn Caravan Stage Company, an avant grade touring company which  brought populist political theatre to rural audiences. She later became part of the core group  that formed the Caravan Farm Theatre on the company’s eighty-acre farm in rural British  Columbia. The numerous masks she has made over the years have played a role in forging the  Caravan’s distinct style and body of work — a genre-defying blend of mask, live music, large scale design elements and site-specific staging marked by eclecticism, inclusivity and audacity.

In 1992, Melody was a member of the collective that created The Number 14, (a show set on a  city bus, featuring an array of masked characters). The production toured internationally for Axis  Theatre for twenty years, including two runs at the New Victory Theatre in New York where it  received a Drama Desk nomination.

In the course of her career Melody has created more than three thousand masks for over fifty productions. Her masks are also used for actor training across North America. Her “emotion”  masks, inspired by the work of Dr. Paul Ekman, have been replicated by Balinese maskmakers and most recently were 3D printed  by Psychology Researcher, Nick Balteneck, at Institut de  Psychologie, Université Lyon, France, for a study based on visual/tactile emotion recognition. His  research aims to develop a method to help blind children assess emotions easily. Melody’s forthcoming book, Making Masks, documents her work and includes step-by-step  instructions for the various mask-making processes she employs.

In 2012 Melody shifted her creative focus to playwriting and joined Wet Ink Collective, an  organization supporting and promoting women playwrights. Her play, Me and You, which  follows the relationship of two sisters over the course of a lifetime (employing masks to  represent the aging process), premiered at the Arts Club Theatre in Vancouver in 2018.

Scripts in progress include Ditto, a wry exploration of the nature of individuality and the  ramifications of unbridled reproductive technology; Fling, which deals with sexual identity, love,  loss, memory and the peeling away of family secrets; and Mister Aesop, a fresh examination of  the morals of Aesop for young audiences. Her plays are available online at the Canadian Play  Outlet.

She is a member of Playwrights Guild of Canada, Playwrights Theatre Centre and Wet Ink  Collective, and a recipient of six Jessie Richardson awards and five nominations for both design  and collective creation.

She lives in Vancouver, B.C. with actor/playwright Peter Anderson, on the unceded traditional  territories of the Coast Salish People, the xʷməθkʷəy̓əm (Musqueam), Skwxwu’7mesh  (Squamish) and səli’lwətaʔɬ (Tsleil-Waututh) First Nations.