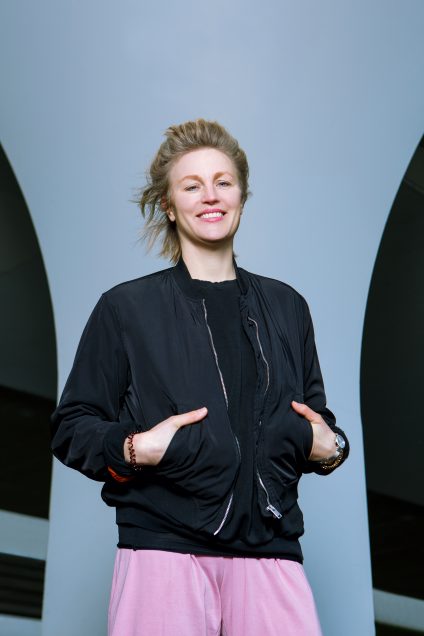 Katrien van Beurden is the founder and artistic director of Troupe Courage (formerly Theatre Hotel Courage), an international actor company that has been traveling the world for decades to discover stories of survival in all layers of society. With a bag full of masks she traveled from war zones in Palestine, Iraq, Iran, and Ghana to women’s prisons, from extremely wealthy oil families in the US to tribes in India. Together with the archetypal characters Van Beurden creates a stage for the stories and emotions of the local communities to be shared and told. Troupe Courage has developed a modern and completely unique playing style that is both primal and deeply tragic and above all very virtuoso. It always revolves around the ingenuity of people in all their efforts to survive.

With van Beurden’s latest project ‘Warriors of BB’ Troupe Courage now moves into its own neighbourhood. They do not want to meet the people in the neighborhood as the highly educated two-parent families, or the square’s business proprietors, but they want to meet the people behind them and perhaps invisible to them: what is their struggle? What are they fighting for or against? How do they survive? And above all, in what unique and brilliant ways do they deal with their struggle? Troupe Courage searches for the neighbourhood archetypes: Who is the shrewd defector? The old man? The silent one? The intellectual? The child? In the performance ‘Warriors of BB’, people from the neighborhood will meet and get to know themselves and each other in a loving, confrontational and comic way, sharing and performing their survival stories.

“Katrien brought a whole new level of skill and concentration to our work. The work is deadly serious and enormous fun. Katrien is concentrated, critical and compassionate. The work engages feelings way below conscious thought. I am proud to call her a colleague and a comrade.” – Di Trevis, director National Theatre London / Royal Shakespeare Company
“Van Beurden makes theatre at a high artistic level that is accessible to all layers of society; a theatre that has inexhaustible play possibilities, is precise, primordial, topical, vulnerable but above all very much alive. With her skill, passion and enterprising attitude, Van Beurden has created a theatre in which the most diverse people are automatically connected; a unique harmony that is visible on stage.” – Stef Collignon, director Amerborgh Netherlands
“Theatre Hotel Courage collects stories as an explorer. Everywhere the company goes, it finds stories about people who, no matter how complex the situation, will, must, no will survive.” – Dennis Molendijk, Director
https://vimeo.com/189594138/86ece82c2d