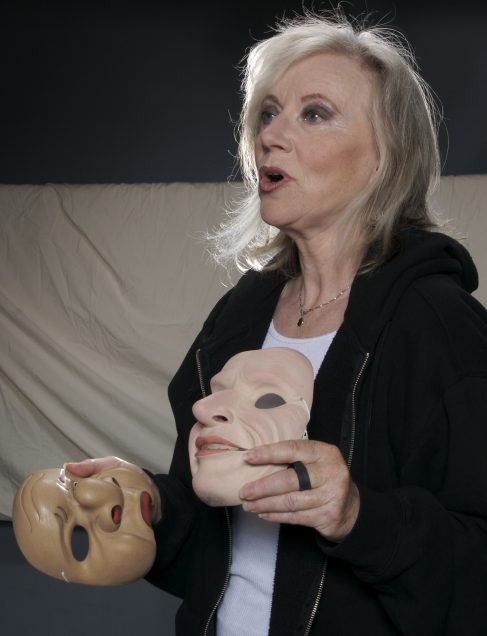 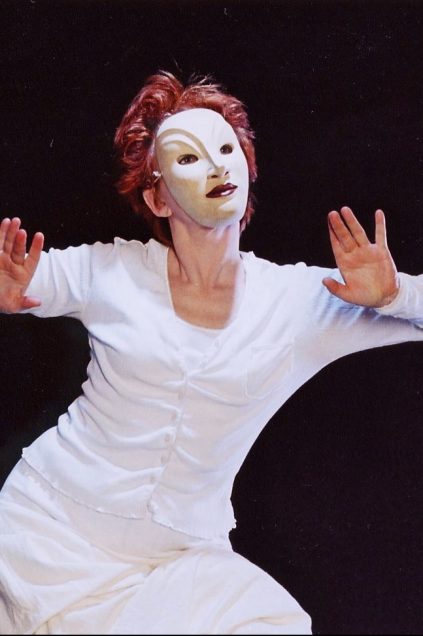 Joan Schirle died on February 1, 2022. She opened the Women and Masks conference as the keynote in September (see recording below) and attended events during October.  She generously shared her wisdom and made us laugh and cry.  She was joyful, playful, and sage. She invited us, in so many moments, to share  a state of wonder and awe. Founding artistic director of Dell’Arte International,  Joan was a gifted and acclaimed director, artist, performer, and teacher; her influence has extended out through the theater community, touching countless women. This made her the ideal person to open a year-long conference devoted to women and masks. Many of us didn’t know her before she became involved in the conference and we were later astounded  (and dismayed) to learn that she had been quite sick during those wonderful fall presentations–and to learn of her death. We regret not having gotten to know her better while being grateful we shared some time and virtual space with her. Women and Masks  wishes to celebrate Joan’s life and create a space for her friends, students, and admirers to share more of her life. You can read  more about Joan here: https://datebook.sfchronicle.com/theater/remembering-dellartes-joan-schirle-mentor-to-bay-area-artists and https://lostcoastoutpost.com/2022/feb/3/obituary-joan-emilie-schirle-1944-2022/.

We encourage you to watch her two presentations from the fall, since they will be referenced by long time friend Judy Slattum, who is helping to organize this event, which includes a special video featuring many of Joan’s friends from Bali–a place where she spent significant time.

It is our hope that we can gather and maintain information about Joan here on the Women and Masks website and create an archive of resources for those who wish to learn about Joan Schirle.

Recordings of Joan from September, 2021 at the Women and Masks Conference:

Memories of Joan from students and friends:

“A couple of months have passed and I don’t know where to start. Joan taught me and everybody so much about so many things. She was a leader, a friend, a pain in the ass, and a profound comfort.”
“Joan changed my life. Multiple times. Like so many of us.”
“Once in Mexico City (just before accidentally running into my brother-in-law’s parents (and just after visiting some Absurdists who had a theater in the former home of William Burroughs)) she and I were looking at a museum display of someone regal. The sign said, “Gran Tumba.” Joan said she wanted to be the “Gran Tumba of Blue Lake.” It means, “large tomb,” but I took to addressing her as GT for years thereafter.”
“DON’T STACK THE PLATES AFTER DINNER!”
Matt
*********************

“Joan was one of the most inspiring women and artists I’ve ever met. The more I got to know her, at first as a student, then as a collaborator and friend, the more in awe of her I became. Sharing time and space with her in this world has been an absolute privilege. She has been a guiding mother and a leading light, one of the defining pillars in my artistic life. I am still, constantly learning from her. Best foot forward, with love.”

Joan Schirle was the founding artistic director of Dell’Arte International. She is an actor, playwright, director, deviser, and teacher, whose acting work was recognized with a 2006 Fox Foundation/TCG Resident Actor Fellowship. In 2004 she was honored at the 16th Cairo International Experimental Theatre Festival as a leader in the field of experimental theatre. She served as director of the Dell’Arte International School of Physical Theatre from 2003 – 2011.

She has performed in mask and created mask performances, as well as teaching mask for actors for many years. Having led 20 study trips to Bali, she learned to carve masks as well as dance them. Her solo mask show, “Second Skin,” toured widely to international festivals for seven years. Recent work includes the 5-eminute mask piece, “JUNE 1, 2020” and a clown “Fireside Chat” for the 2021 Zero2 Fierce Women’s Festival at the Arcata Playhouse. 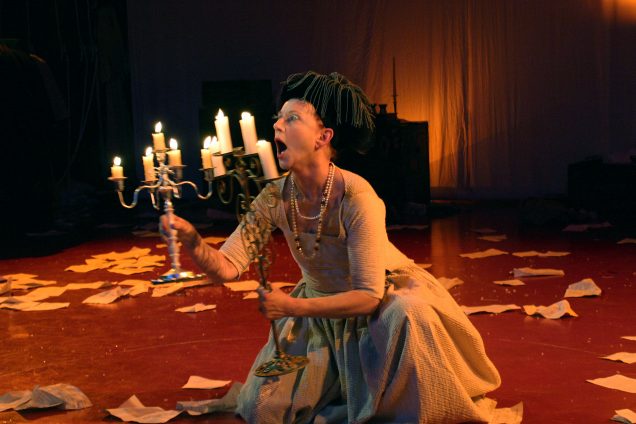 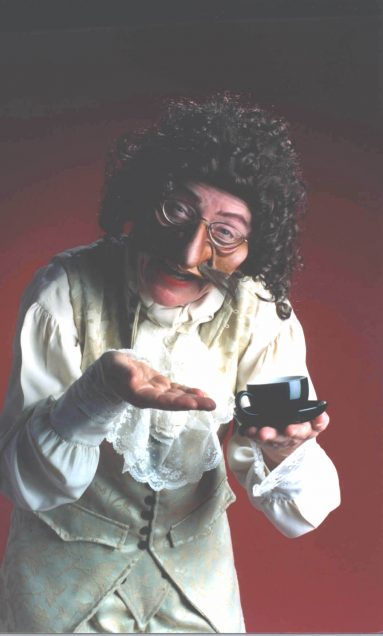 Joan has directed productions at San Diego Rep, the Alley in Houston, Bloomsburg Ensemble, A Traveling Jewish Theatre, Touchstone Ensemble, Colorado University/Boulder and Dell’Arte. A principal actor-creator with the Dell’Arte Company since its founding, she created the title role in Mary Jane: The Musical at the 2011 & 2012 Mad River Festival and again played the title role in the 2016 film version: Mary Jane: A Musical Potumentary, which won the award for Best Musical Film at the 2016 Oregon Independent Film Festival.  In 2019 she played Queenie Moon in “Going Down In Flames” by Daniel Mankin, in Portland, OR and at the Mad River Festival.

Joan has authored and co-authored many original works for Dell’Arte, including The Weave, Shotgun Wedding, Journey of the Ten Moons, Casanova: Animal Instinct, and the trilogy of Scar Tissue Mysteries. In 2014, she conceived and performed in Elisabeth’s Book, a  touring work for the Dell’Arte Company. Her play about water issues, The Big Thirst, premiered at the 2016 Mad River Festival.  Joan is currently working as librettist on a chamber opera with composer Gina Leishman, related to the life and work of American painter Morris Graves, funded by a grant from Opera America. in March 2018 she was awarded a 3-week residency by the Morris Graves Foundation at his last home, “The Lake,” in Loleta, CA. In November 2018 she presented a collage of readings from Selected Letters: Morris Graves (University of Washington Press), at 3 local venues, and after a year’s pandemic postponement, the opera will have its first concert readings at the Arcata Playhouse in August, 2021. 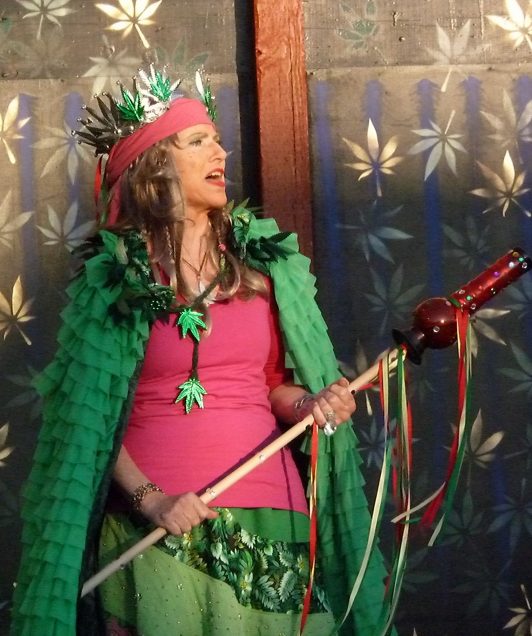 She has a great interest in international exchange and has worked with artists from Brazil, Mexico, France, Scandinavia, and Bali. Joan was a featured presenter at the 2013 international conference on Commedia dell’Arte at the University of Windsor, Ontario. She was a presenter at two previous mask conferences (U. Iowa 2006; U. Illinois 2009).  In 2016, with support from TCG and the Association of Arts Presenters (APAP), she began a collaboration with Norwegian/Danish sculptor Marit Benthe Norheim, creator of the Life-Boats, three mobile sailing sculptures of three stages of a woman’s life. She received an Orchard Project Residency in 2017 to further develop this project. Her essay on sailing with the Life-Boats is published in Norheim’s book From Dream to Dream, a chronicle of the 8-year project to create the boats.

Joan designed the curriculum for DAI’s accredited MFA in Ensemble-Based Physical Theatre. She is a senior teacher of the FM Alexander Technique and was a plenary speaker for the 11th International Alexander Technique Congress in Chicago, 2018. Her teaching work includes mask performance, movement, commedia dell’arte, voice, and physical acting. She has devoted her research to the work of the actor as mover/creator, and the role of the actor in community. Joan has taught in MFA programs at Yale, UCSD, University of Missouri Kansas City, as well as for the artists of Cirque du Soleil. In 2012, she was invited to teach physical theatre at the Beijing Dance Academy in China. She was awarded a Lifetime Achievement Award in 2018 from the Association of Movement Theatre Educators (ATME).

See also her TCG blog post, “Space, Scale, Relationship: Writing For The Physical Theatre,” on the 2014 making of the Dell’Arte Company’s Elisabeth’s Book.

It is our hope that we can gather and maintain information about Joan here on the Women and Masks website and create an archive of resources for those who wish to learn about Joan Schirle.