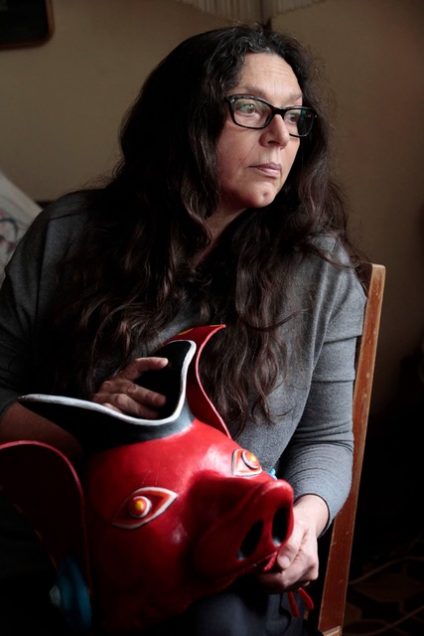 Alicia Martínez Álvarez is the founder of the Laboratorio de la Máscara in Mexico City (1997), where she has been the director for more than 20 years. She began her studies at the La Esmeralda National School of Painting and Sculpture (INBA 1978). Later, Martínez Álvarez enrolled in the University Theater Center (UNAM 1979). With a grant from the Mexican government, she attended  the National Superior Conservatory of Dramatic Art in Paris (1987).

The Laboratorio de la Máscara, or Mask Laboratory, is dedicated to teaching theatrical mask work and researching traditional masks of the world, particularly the ones found in the festivals and celebrations of Mexico. Martínez Álvarez’s work has been recognized on multiple occasions by the National Foundation for Art Creators (FONCA) 2005-2007, 2010-2013, 2015-2017. She has served as a juror in various competitions at the national level. During her 30-year career as a creator and director, Martínez Álvarez’s work has been presented in national and international festivals and in alternative spaces such as squares and museums, notably Modern Art Museum in Mexico City, Los Angeles County Museum of Art in Los Angeles California and the Museum of the Mask and the Puppet in Bali, Indonesia.  She has co-produced work with companies such as Mulato Teatro, Idiotas Teatro, Teatro Dallas, Cara Mía Theater Co. and the Pelú Theater company.

As a professor at the National School of Theater Art of the INBA and the University Theater Center of the UNAM, Martínez Álvarez has collaborated with various educational institutions, such as La Casa del Teatro, The Institute of Arts of the UAEH and the School of Theater of the UV.  Also, notably, she has collaborated internationally with Teatro Dallas and Cara Mía Theater in Dallas Tx, Dell’Arte International School in California and the Intercultural Theater Institute in Singapore. As a trainer, Martínez Álvarez has specialized in games and the creation of masks, which she develops in the School of the Mask within the Laboratorio de la Máscara. 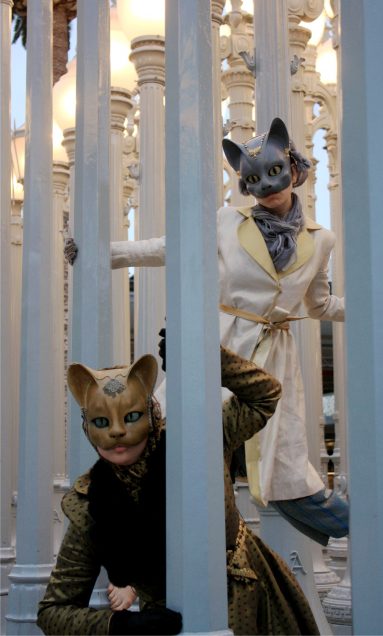 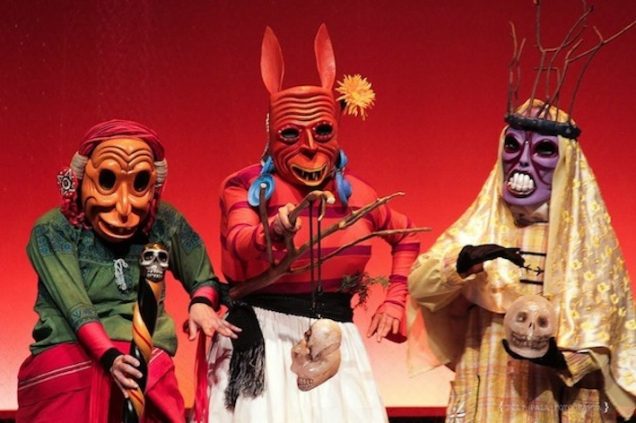 During her years at the the Laboratorio de la Máscara, she has embraced the paradox of this enigmatic object, the mask, as a talisman that accompanies humanity in its moments of transformation and a vessel of the mysterious and the magical. She also incorporates what could be  considered the masks’s first cousin in this surprising lineage, the puppet. It is neither human nor object and naturally transports us to the world of illusion. This family of illustrated characters have opened deep reflections within theater theory, feeding on our gestures and symbols and revealing everything disturbing and excessive in our lives. We join the puppet and the mask in the game of precision and clarity in bodily actions and attitudes. We understand that magic arises from respect for the domain they share. The art of their manipulation, be they great masks; masks of all kinds or the great diversity around puppets and marionettes, is based on assuming and respecting the aesthetics of poetically imagined faces, which reinvent reality through characters that live in those who handle them.

The masks from the Laboratorio de la Máscara come to life in the imagination and in the hands of Martínez Álvarez, who shaped them from the raw material to create these faces on the faces of the actors. A vision embodies a face and actors finds a space to erase themselves in order to affirm a character. A process of fusion: imagination with matter, tissue, and breath. Our puppets, for their part, carved on wood, arise from the unexpected, are manifested in history and its events; They have been with us creating dreamlike realities and allowing us to break human limits, they undoubtedly bring freedom and joy. 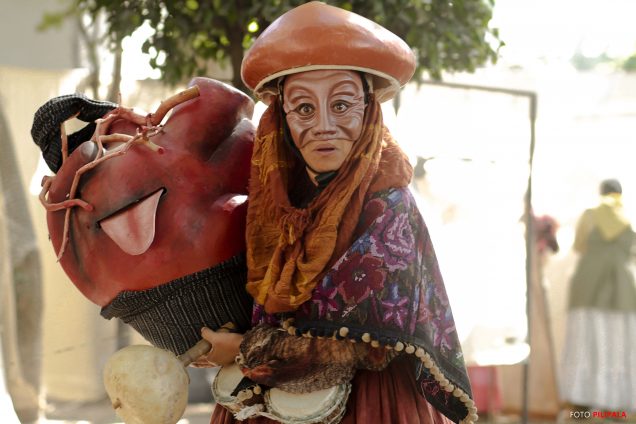 We continue our journey through the plastic arts and theater, that has its own language based on the mask, the puppet and the game with objects which is our clearest feeling and our most forceful objective. Laboratorio de la Máscara productions have left traces in the memory of their spectators. At the end of the seasons, their masks and their puppets remain at rest, waiting, with their eyes wide open, ready to catch the viewer in the joyous games of their infinite stories.

Some of Martinez Álvarez’s notable works:

Tina’s Trip by Berta Hiriart, a co-production with CaraMía, NALAC and the INBA National Theater Coordination. (2011). It was named as one of  the 10 best works in the city of Dallas that year. 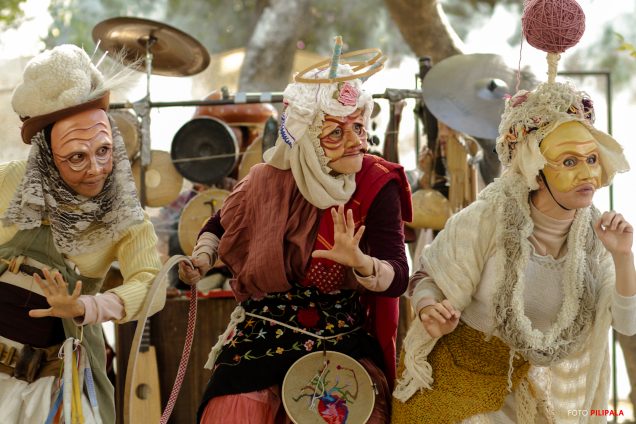 How to Live Among Men When You are a Giant bySuzanne Lebeau. Translation from French and adaptation. Production of the FONCA Cultural Promotion and Co-investment Program. (2013). Salvador Novo Theater and Plaza Circular Romita.

The Poisonous Maiden by Martín López Brie.
Production of the Theater Program for Children and Young People. (2014-2015). Award: Best Mask Theater by the APT (2015)

Caracol y Colibrí by Sabina Berman. A production of the Laboratorio de la Máscara, Idiotas Teatro and Fundación Bancomer. (2015-2018). It premiered at the Dallas Theater Festival, Tx and in ENARTES (2017).

White Horse by Alicia Martínez Álvarez.
Inspired by the film Crin Blanc by Albert Lamorisse. She was nominated for the Enrique Alonso Award for Children’s Theater XXXIV APT 2016. She participated in ENARTES 2018.

Pícaro, a one-man show of circus, masks and puppets by Carlos Alexis Cruz. The company was in residence for the creation of the masks and direction at the Baryshnikov Arts Center in NY. (2018)

Yanga by Jaime Chabaud. A production of the National Theater Coordination of INBA, Mulato Theater and Mask Laboratory. (2018) Premiere and season by invitation at the Xavier Villaurrutia Hall of the Centro Cultural del Bosque Season in Taxco Guerrero at Juan Ruiz de Alarcón Theater. Nominated among the 5 best works of the first semester of 2018.

The Forest of the Grandmothers by Dolores Espinoza Sánchez. A production of the Laboratorio de la Máscara (2017), it was a community project to be performed in open spaces in the green areas of such as Parque Las Cañitas, Barrio de Popotla at Miguel Hidalgo´s Delegation of town hall in Mexico City and Huerto Roma Verde. 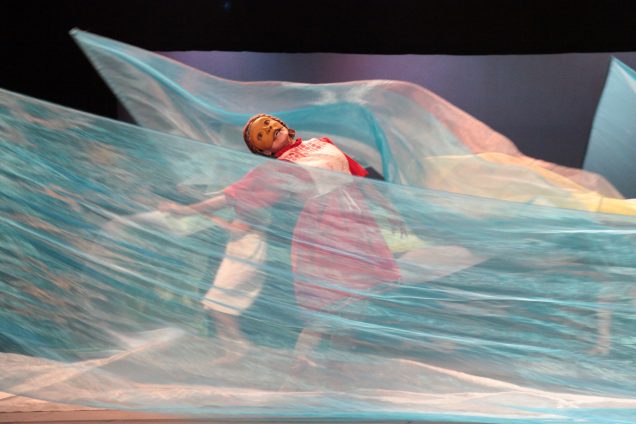