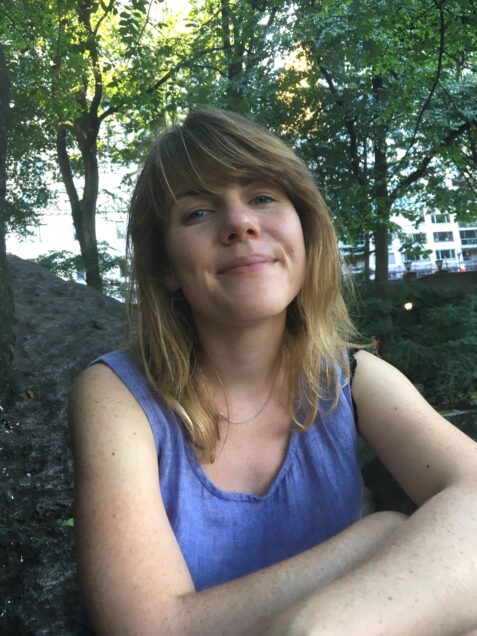 Alexandra Simpson (she/her) is a Toronto-based theatre artist, community organizer, and PhD candidate at York University in the Faculty of Environmental Studies. She holds a BFA in Performance Acting and an MFA in Documentary Media from Ryerson University, and an MA in Performance and Environmental Studies from the University of Toronto. Alexandra’s doctoral research plays in the intersections of performance studies, decolonial and feminist theory, and the energy humanities, and investigates (un)masking as a performance strategy used both by anti-pipeline and Indigenous activists, as well as industry and governments. She is the co-artistic leader of Animacy Theatre Collective (ATC). ATC uses physical theatre (mask and clown), play writing, and multimedia to create research-based and devised plays. Recent co-creator and performer credits with ATC include Upstream Downtown (UPCOMING Theatre Direct 2021; Toronto Fringe, Toronto Clown Festival, Evergreen Brick Works, Scarborough Salmon Festival, 2018), In Search Of (Next Stage Festival, 2021); and Pest Me Pet Me (Theatre Passe Muraille, 2019). In 2019, Alexandra received the Ontario Arts Council Chalmers Professional Development Fund to study mask building at the Sartori International Workshop in the Art of Commedia dell’arte in Abano Terme, Italy, and in the Spring of 2022, with collaborator Felice Amato, and mentors Sarah Sartori and Paola Piizi, will return to Abano Terme with the support of the Canada Arts Council Artistic Residencies grant for an international collaboration that further explores the relationship between women and masks. Alexandra could not be more excited to be part of the organising team for the Women and Mask Conference at Boston University and is looking forward to a year of creative and intellectual exploration with other artists and thinkers who are as enchanted by masks as she is.

The land on which I live, work and play is the traditional territory of many nations including the Mississaugas of the Credit, the Anishnabeg, the Chippewa, the Haudenosaunee and the Wendat peoples and is now home to many diverse First Nations, Inuit and Métis peoples. Toronto is in the ‘Dish With One Spoon Territory’, a treaty between the Anishinaabe, Mississaugas and Haudenosaunee that bound them to share the territory and protect the land. Subsequent Indigenous Nations and peoples, Europeans and all newcomers have been invited into this treaty in the spirit of peace, friendship and respect.  I also acknowledge that Toronto is covered by the Toronto Purchase, Treaty 13, signed with the Mississaugas of the Credit, and the Williams Treaty signed with multiple Mississaugas and Chippewa bands.