The Religion & the Environment Story Project (RESP) trains journalists, editors, and public-facing scholars interested in the intersection of the environment and religion. Our goal is to bridge the divide between the religion and science beats, and to promote new thinking and new narratives that will inform and educate the public, especially on the climate crisis. 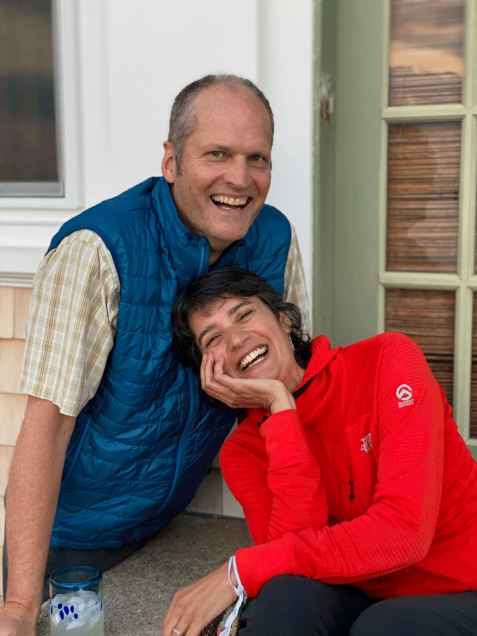 Once upon a time there was a science journalist named Meera who reported on how humans relate to their environments. One day Meera fell in love with and married a religious studies professor, Steve, who was steeped in the historical and cultural drives behind people’s beliefs and spiritual practices. While Meera was off on reporting trips from West Virginia to North Dakota to south India, Steve was teaching religious literacy to university students by exploring lived religions, well beyond the sacred texts. When she returned from her travels, Steve and Meera’s kitchen table conversations revealed how rarely their two arenas overlapped…and how much was lost because of the divide. To reconcile the split between the siloed beats of religion and the environment they launched the Religion & Environment Story Project in 2021.

The climate crisis is the story of the century. Religions are the story-makers of all time. Many view climate change as a matter of science alone, but scientific facts have not translated to meaningful action. Why? Because most human beings are motivated more by stories than by data. We need new narratives about the nexus of religion and the climate crisis, stories that reach new audiences and help change the conversation.

Behavioral economist and Nobel Memorial Prize winner Daniel Kahneman has described climate change as a “perfect storm” for the human brain. “It’s distant. It’s abstract,” he said. That’s why the overwhelming scientific case for human-caused climate change has failed to produce much action, especially in the United States. When asked what might be done about this roadblock, Kahneman said that paying attention to the powerful influence of religion and spirituality might move the needle. “That would change things,” he said. “It’s not going to happen by presenting more evidence.”

This work is now underway around the globe. Interfaith and single-faith organizations and alliances are emerging to combat climate change as is the growing group of the “Spiritual But Not Religious.” Environmental justice activists in communities of color are living the links between religion and the environment, as are faculty and students in environmental humanities programs. But when it comes to covering the climate crisis, the media is behind the curve. Journalists on the religion beat are often intimidated by the complexities of environmental science. And science journalists often lack basic understanding of the world’s religions.

RESP hopes to change that by advancing religious and environmental literacy.

RESP helps journalists on any beat to see the connections between the ultimate concerns of ordinary people and their environmental action (and inaction) in their homes and communities, and at the ballot box. Religious traditions have in many cases abetted the despoiling of our shared planet, and climate change denialism is growing especially among white evangelicals in the United States. But religious traditions are also key repositories of stories — about creation care, the Ganges as a Goddess, the San Francisco Peaks as a sacred place to the Diné, Hopi, and other Native nations — that can and do motivate believers to action. RESP aims to foster a new generation of journalists who can find and tell stories at the intersection of religion and the environment, whether those actions help or hurt the planet. In either case, it’s news that needs to be told.

The RESP Fellowship Program gives journalists the skills to recognize these stories as they unfold on the ground — far from Papal decrees or UN statements — and to see how they connect to local, regional, national, and global forces. We are especially interested in “subtle environmentalism” and “subtle religion,” which often fly under the radar of media focused on well-known religious leaders and environmental organizations.

We invite journalists on all beats, editors, and public-facing academics in all disciplines to apply for the RESP Fellowship Program and for religion-and-the-environment story grants funded through the Society of Environmental Journalism’s Fund for Environmental Journalism. Too many stories have gone missing. We want to help journalists find these missing stories and tell them well, so that ordinary people can see the climate emergency as both a global challenge and a mirror onto their own lives.

Stories that enchant or enrage, but always inform.