While the exact reason for the correlation between low lipid levels and cognitive impairment is still unknown, it is not surprising because your brain needs fats in order to survive. It uses good fat to manufacture high quality nerve cell membranes, which helps neurons function at their peak capacity. The brain also uses fat to produce hormone-like substances that regulate blood pressure, our immune system, and even blood lipid levels. Having a low level of certain lipids in the blood has been shown to cause the breakdown of neural cell membranes, leading to brain dysfunction and cognitive impairment. This could be one of the reasons why the blood lipid levels so accurately predict Alzheimer’s. Therefore, it is important to have healthy fats such as omega-3 in your diet. 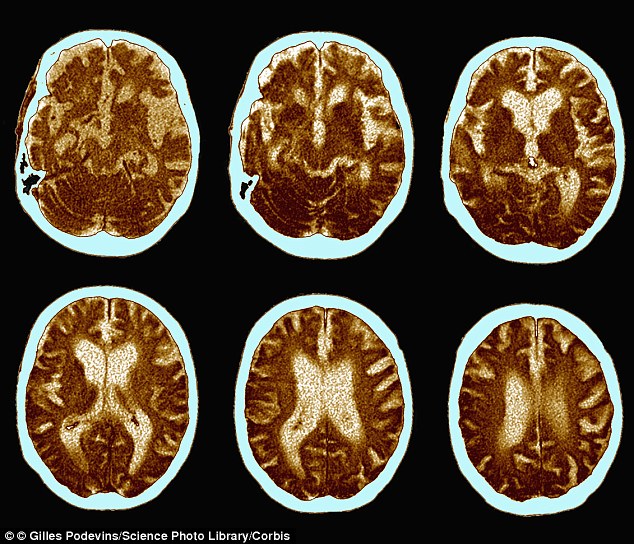 Alzheimer’s disease is known to cause brain atrophy, depicted here by the enlarged ventricle cavities and widened blue regions

This blood test can give up to three years warning of the onset of Alzheimer’s with about ninety percent accuracy. Federoff claims that this is crucial to the development of a cure. He explains that the reason for the failure of drugs that have been developed to slow or reverse the progression of AD is due to the fact that they have been administered too late in the disease process. “The preclinical state of the disease offers a window of opportunity for timely disease-modifying intervention,” Federoff says. “Biomarkers such as ours that define this asymptomatic period are critical for successful development and application of these therapeutics.”

While this is a huge advancement in the field of Alzheimer’s research, more work must be done. Given a couple of years warning, an individual may be able to start medications early in order to delay the memory-impairing effects of the disease, but without a definitive cure for Alzheimer’s they will eventually share the same fate as anyone who hadn’t received this blood test.

Dr. Doug Brown of the Alzheimer’s Society says: “Having such a test would be an interesting development, but it also throws up ethical considerations. If this does develop in the future people must be given a choice about whether they would want to know, and fully understand the implications.” So that poses the question: would you want to know if you were going to develop Alzheimer’s, even if the effects of the disease were still inevitable? It is a hard question to answer, but researchers are moving in the right direction in order to give warning to those at risk and to find a way to prevent the debilitating memory impairment associated with Alzheimer’s disease.

Blood Test that can predict Alzheimer’s: Elderly could be given early warning – Mail Online