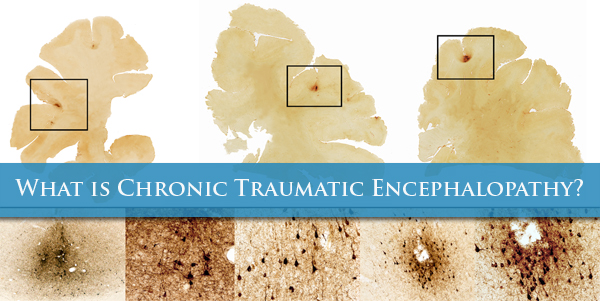 Chronic Traumatic Encephalopathy (CTE) is a progressive degenerative disease of the brain found in athletes and others with a history of repetitive brain trauma, including symptomatic concussions as well as asymptomatic subconcussive hits to the head. CTE was originally reported in 1928 by a pathologist, who described the clinical aspects of a progressive neurological deterioration (‘punch drunk’) that occurred after repetitive brain trauma in boxers. Although originally termed dementia pugilistica’ (pugilistica comes from the Latin root pugil, for boxer) the recognition that activities other than boxing were associated with its development lead to the preferred use of terms such as progressive traumatic encephalopathy and later, CTE. Recently, published reports have neuropathologically confirmed CTE in not only retired boxers but also professional football players, other athletes, and veterans who have a history of repetitive brain trauma.

The trauma triggers progressive degeneration of the brain tissue, including the build-up of an abnormal protein called tau. These changes in the brain can begin months, years, or even decades after the last brain trauma or end of active athletic involvement.  The brain degeneration is associated with memory loss, confusion, impaired judgment, impulse control problems, aggression, depression, and, eventually, progressive dementia. The neuropathological changes of CTE are distinctive and easily distinguished, which can be seen below.