Check out a recent interview by Dr. Mahalingaiah on Polycystic Ovary Sydnrome: HERE

Exploring the Environment and Infertility in Gilead

With the success of the popular new Hulu show The Handmaid's Tale, based on the dystopian novel of the same name by Margaret Atwood, the attention of mainstream media has once again been refocused on reproductive rights, and more specifically, the issue of infertility and shrinking birth rates. Dr. Mahalingaiah further explains how environmental exposures impact fertility in a recent interview with The Atlantic. Read more here.

Since the intersection between toxicology and reproductive health is one of the research interests of the Mahalingaiah Lab, members were asked for their personal experiences dealing with pollution. Here, Samantha shares her thoughts.

Growing up in a suburban town in New Jersey, I’m used to breathing fresh air. I lived on a dead end where cars passed infrequently, and the only foul fumes came from the weekly lawn mowing in the summer. Going to Middlebury College in Vermont, in the middle of nowhere, the air is even less polluted than it is in my New York suburb. My friends and I will take any opportunity to spend time outside: hiking, reading, playing Frisbee, having a picnic. The most noxious and noticeable stench comes from the cow manure down the road, but sometimes I even enjoy it.

Whenever I travel towards a major city, whether it be New York City or Newark, NJ, it quickly becomes obvious I’m entering a more polluted environment. It smells of gasoline, car exhaust, smoke, and I hold my breath until I can’t anymore and have to adjust to the fumes. This summer and last, I’ve worked in major cities, and toxic air pollution is unavoidable. Last summer on my street in NYC, dust particles from the daily construction outside would seep through my window and follow me on my way to work. At BMC this summer, more construction smog, hoards of people smoking outside, and the highway running across the hospital contribute to the unpleasant breathing outside the office. I’m grateful that the majority of my time is spent in unpolluted environments, but know that all are not so lucky.

Erika Chow has long been aware of the issue of shrinking populations in developed countries. Japan has faced the problem for many years, and every time she visits family in Taiwan, she sees hospitals that famously specialized in obstetrics are shutting down. Last year, a rash of articles exposed the fact that Germany is now struggling with the very same problem and has now become the country with the lowest birth rate in the world, surpassing Japan. Shrinking birth rates are due to women making jobs a priority, the increasing cost of raising a child, and rising infertility rates. As a result, the lab became interested in exploring the current attitudes towards fertility preservation in the United States, particularly in a young adult population, to gauge whether the US will soon face similar birth rate problems. If you are interested in contributing to our research, please click here if you are aged 18 and over.

The Mahalingaiah Research Group is the home of the Boston PCOS Consortium, established in 2015.  If you are interested in joining our group of clinicians, researchers, and community members, please email us at pcos@bu.edu. 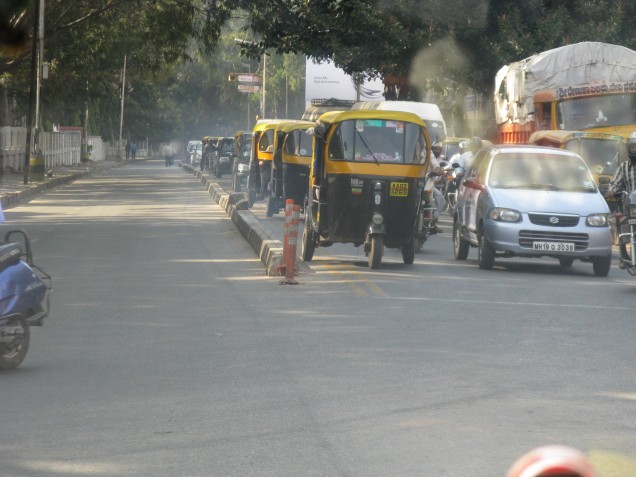 Shruthi Mahalingaiah, MD MS recently published a paper titled "Adult air pollution exposure and risk of infertility in the Nurses' Health Study II" in the Human Reproduction journal.  She found that increased exposure to air pollution is associated with an increased incidence of infertility.  She was recently interviewed by Lisa Rapaport at Reuters in order to spread the word to the general public about the dangers of air pollution.  You can read the article here: Air pollution and traffic fumes tied to infertility risk.  Following the interview, several other news organizations around the world picked up the story.  We are very excited that this very important story is reaching the general public!

Going through anatomy is an eye-opening experience each day. While each lecture seems to pass as a complete blur of semantic information, time at the anatomy lab slows down as we discover each new nerve, artery, and organ. In my most recent section of study, I explored the thorax and dissected out the lungs. As I lifted out each lung in amazement of the size and density of what I held in our hands, my eyes were drawn to its surface. Covering the mottled surface, the lungs were punctuated with a countless number of black spots. I knew that our donor was not a smoker, but when I asked the prosector what could have caused such an appearance, I was surprised by the answer: city living. Simply just that. As I go running around Boston, I've always taken time to admire the nature around me and savor my time to breathe in fresh air. Little do I know that one day, despite my efforts to stay healthy, my lungs will be just like my donor's - surreptitiously marked by air pollution.

Meghan Hewlett is one step closer to being an MD!

Dr. Mahalingaiah was proud to attend Meghan Hewlett's white coat ceremony and welcome her as a future doctor on August 3, 2015. 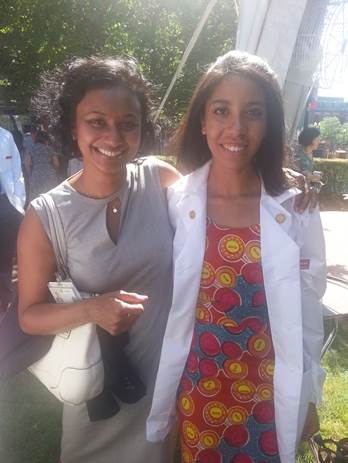 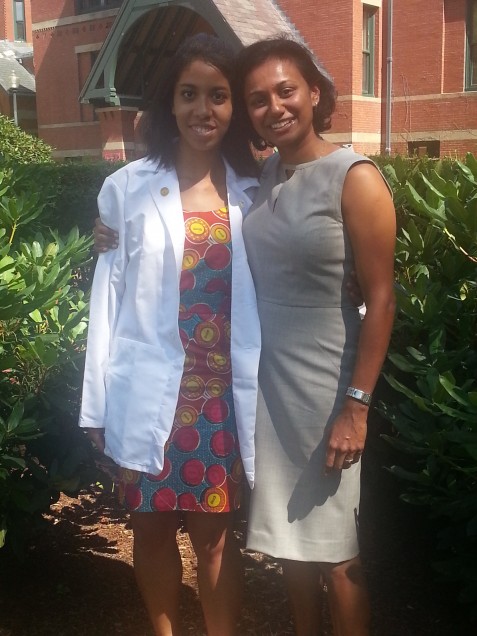 Melissa Perry, ScD, MHS, professor and researcher at the Milken Institute School of Public Health at George Washing University, has discovered that lingering amounts of DDT and PCBs in the atmosphere, soil, and people affect sperm production. She speculates that the harmful effect of these long-banned chemicals may be the reason for the global decline in fertility. Read more at Environmental Health News: DDT’s long shadow: Long-banned chemicals linked to abnormal sperm.

Have our updates and announcements sent right to your Twitter feed:

PCOS Published in the Atlantic