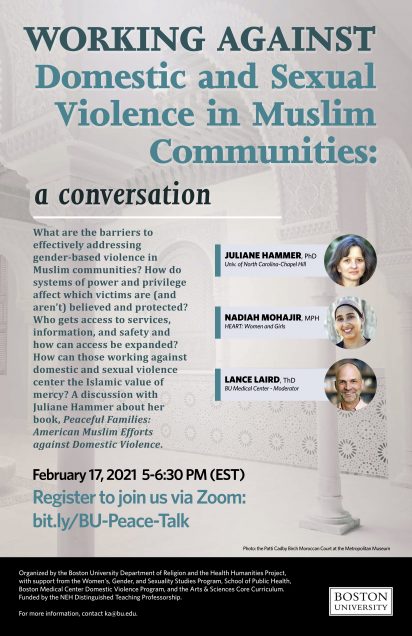 February 17th, 2021, 5:00-6:30:
Working Against Domestic and Sexual Violence in Muslim Communities:
A Conversation

What are the barriers to effectively addressing gender-based violence in Muslim communities? How do systems of power and privilege affect which victims are (and aren’t) believed and protected? Who gets access to services, information, and safety and how can access be expanded? How can those working against domestic and sexual violence center the Islamic value of mercy?

Recording of “Working Against Domestic and Sexual Violence in Muslim Communities: A Conversation”

Organized by the Department of Religion and the Health Humanities Project at Boston University, with support from the Women’s, Gender, and Sexuality Studies Program, School of Public Health, Boston Medical Center Domestic Violence Program, and the Arts & Sciences Core Curriculum. Funded by the NEH Distinguished Teaching Professorship. 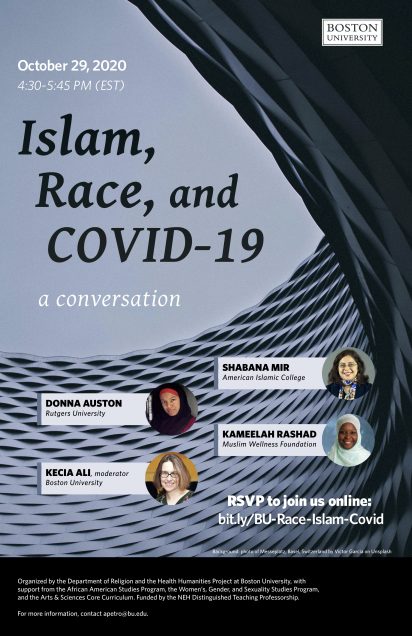 Dr. Donna Auston discusses how Black Muslims in the US, by virtue of their multiply marginalized social location, have been significantly impacted by the COVID-19 pandemic and the “pandemic of white supremacy”—and how Black Muslim activists have organized and mobilized resources on behalf of their communities in response to both crises.

Dr. Kameelah Mu’min Rashad uses survey data to explore how Black Muslims have coped with COVID-19 and its physical and economic impacts alongside social unrest and racial violence by “holding on to the light of faith,” shifting some religious practices and drawing on spiritual and cultural resilience to resist oppression and make meaning of suffering, violence and white supremacy.

Dr. Shabana Mir speaks about “Muslim religious responses to COVID-19,” exploring how Muslims adapt and organize in response to the demands and challenges of this time as well as in sensitivity to diverse Muslim ideologies and agendas, with particular attention to women’s struggles and strategies to gain access to Muslim religious and spiritual spaces.

Recording of “Islam, Race, and Covid-19: A Conversation”: Panel Discussion

Recording of “Islam, Race, and Covid-19: A Conversation”: Post-Panel Discussion

Organized by the Department of Religion and the Health Humanities Project at Boston University, with support from the African American Studies Program, the Women’s, Gender, and Sexuality Studies Program, and the Arts & Sciences Core Curriculum. 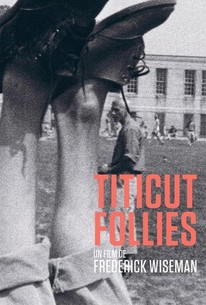 Titicut Follies, a documentary by Frederick Wiseman about Massachusetts’s Bridgewater Hospital for the Criminally Insane.

Christopher Ricks will briefly introduce – and afterwards lead a discussion of – the award winning 1967 film, which lasts 1 hr. 25 minutes.

Organized by the Arts & Sciences Core Curriculum and the Health Humanities Project at Boston University. 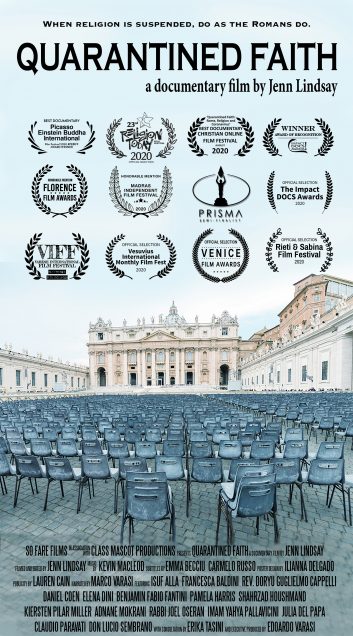 Join us for a screening of the film Quarantined Faith: Rome, Religion and Coronavirus, Jenn Lindsay’s documentary account of Christian, Jewish, Muslim, and Buddhist responses to living and practicing religion during the pandemic as it first surged in Italy. The 33-minute film will be followed by a discussion and Q&A with Jenn Lindsay in conversation with BU’s Stephen Prothero.

Jenn Lindsay is a social scientist and documentarian who has crafted ethnographic research and compelling visual stories about social and religious diversity since 1998. She is based in Rome, Italy, where she teaches as a Lecturer in Sociology and Communications at John Cabot University and is a co-founding Producer and Director at So Fare Film Productions.

Stephen Prothero is the C. Allyn and Elizabeth V. Russell Professor of Religion at Boston University, specializing in American religions, and the author of numerous books, including the New York Times bestseller Religious Literacy: What Every American Needs to Know–and Doesn’t. His most recent book is Religion Matters: An Introduction to the World’s Religions.

Co-sponsored by the Arts & Sciences Core Curriculum and the Department of Religion.