Spring 2022 lectures will be presented in webinar format. Registration is free and open to the public –  please follow the link for each program to register.

The Fruits of Empire Art, Food, and the Politics of Race in the Age of American Expansion

The Fruits of Empire is a history of American expansion through the lens of art and food. In the decades after the Civil War, Americans consumed an unprecedented amount of fruit as it grew more accessible with advancements in refrigeration and transportation technologies. This excitement for fruit manifested in an explosion of fruit imagery within still life paintings, prints, trade cards, and more. Images of fruit labor and consumption by immigrants and people of color also gained visibility, merging alongside the efforts of expansionists to assimilate land and, in some cases, people into the national body. Divided into five chapters on visual images of the grape, orange, watermelon, banana, and pineapple, this book demonstrates how representations of fruit struck the nerve of the nation’s most heated debates over land, race, and citizenship in the age of high imperialism.

Taste of Control: Food and the Filipino Colonial Mentality Under American Rule 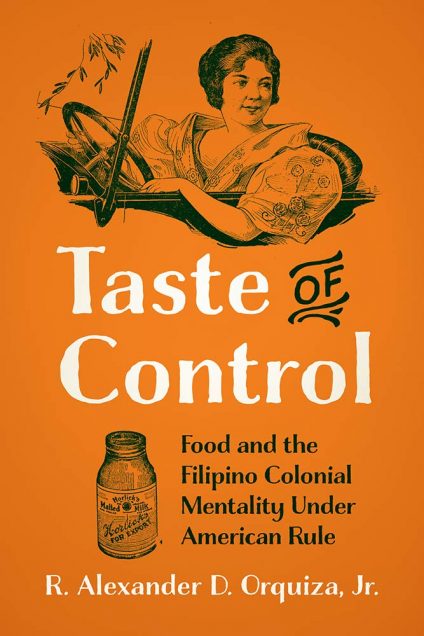 Filipino cuisine is a delicious fusion of foreign influences, adopted and transformed into its own unique flavor. But to the Americans who came to colonize the islands in the 1890s, it was considered inferior and lacking in nutrition. Changing the food of the Philippines was part of a war on culture led by Americans as they attempted to shape the islands into a reflection of their home country.

Taste of Control tells what happened when American colonizers began to influence what Filipinos ate, how they cooked, and how they perceived their national cuisine. Food historian René Alexander D. Orquiza, Jr. turns to a variety of rare archival sources to track these changing attitudes, including the letters written by American soldiers, the cosmopolitan menus prepared by Manila restaurants, and the textbooks used in local home economics classes. He also uncovers pockets of resistance to the colonial project, as Filipino cookbooks provided a defense of the nation’s traditional cuisine and culture.

Through the topic of food, Taste of Control explores how, despite lasting less than fifty years, the American colonial occupation of the Philippines left psychological scars that have not yet completely healed, leading many Filipinos to believe that their traditional cooking practices, crops, and tastes were inferior. We are what we eat, and this book reveals how food culture served as a battleground over Filipino identity

Friday, April 1 at 12 pm EST: In person at 808 Commonwealth Avenue, Boston MA, or online via zoom. 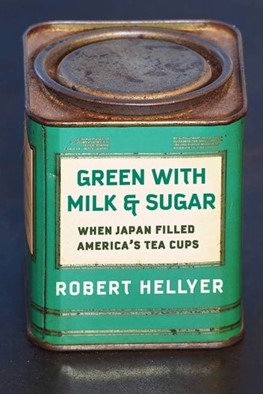 Today, Americans are some of the world’s biggest consumers of black teas; in Japan, green tea, especially sencha, is preferred. These national partialities, Robert Hellyer reveals, are deeply entwined. Tracing the trans-Pacific tea trade from the eighteenth century onward, Green with Milk and Sugar shows how interconnections between Japan and the United States have influenced the daily habits of people in both countries.

Hellyer explores the forgotten American penchant for Japanese green tea and how it shaped Japanese tastes. In the nineteenth century, Americans favored green teas, which were imported from China until Japan developed an export industry centered on the United States. The influx of Japanese imports democratized green tea: Americans of all classes, particularly Midwesterners, made it their daily beverage—which they drank hot, often with milk and sugar. In the 1920s, socioeconomic trends and racial prejudices pushed Americans toward black teas from Ceylon and India. Facing a glut, Japanese merchants aggressively marketed sencha on their home and imperial markets, transforming it into an icon of Japanese culture.

Featuring lively stories of the people involved in the tea trade—including samurai turned tea farmers and Hellyer’s own ancestors—Green with Milk and Sugar offers not only a social and commodity history of tea in the United States and Japan but also new insights into how national customs have profound if often hidden international dimensions.

Home Made: A Story of Grief, Groceries, Showing Up — and What We Make When We Make Dinner

Liz Hauck is an educator and writer from Boston, Massachusetts. She is completing a Ph.D. in educational policy studies and history at the University of Wisconsin-Madison. 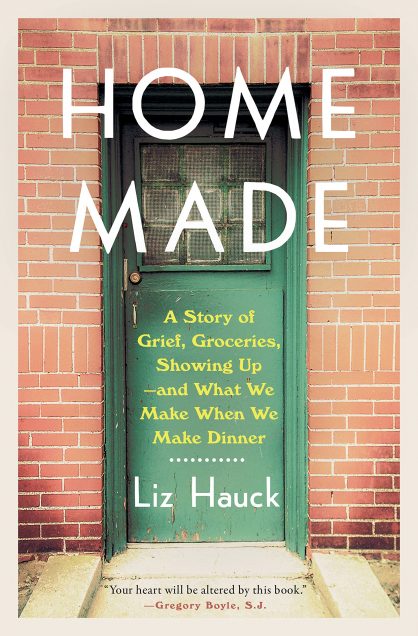 Liz Hauck and her dad had a plan to start a weekly cooking program in a residential home for teenage boys in state care, which was run by the human services agency he co-directed. When her father died before they had a chance to get the project started, Liz decided she would try it without him. She didn’t know what to expect from volunteering with court-involved youth, but as a high school teacher she knew that teenagers are drawn to food-related activities, and as a daughter, she believed that if she and the kids made even a single dinner together she could check one box off of her father’s long, unfinished to-do list. This is the story of what happened around the table, and how one dinner became one hundred dinners.

“The kids picked the menus, I bought the groceries,” Liz writes, “and we cooked and ate dinner together for two hours a week for nearly three years. Sometimes improvisation in kitchens is disastrous. But sometimes, a combination of elements produces something spectacularly unexpected. I think that’s why, when we don’t know what else to do, we feed our neighbors.”Capturing the clumsy choreography of cooking with other people, this is a sharply observed story about the ways we behave when we are hungry and the conversations that happen at the intersections of flavor and memory, vulnerability and strength, grief and connection.

Capturing the clumsy choreography of cooking with other people, this is a sharply observed story about the ways we behave when we are hungry and the conversations that happen at the intersections of flavor and memory, vulnerability and strength, grief and connection.

Savoir-Faire: A History of Food in France 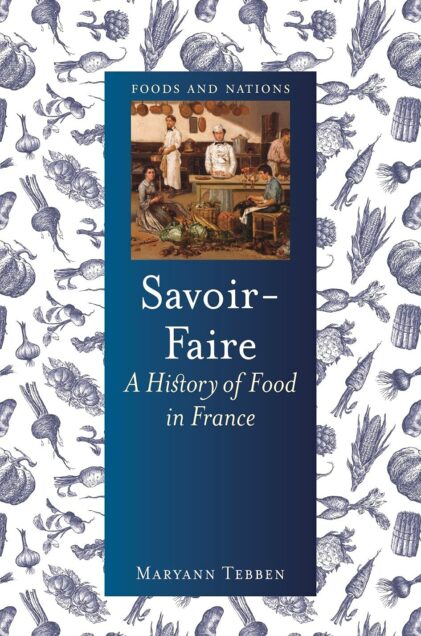 Maryann Tebben is Professor of French and Head of the Center for Food Studies at Bard College at Simon’s Rock.

Savoir-Faire is a comprehensive account of France’s rich culinary history, which is not only full of tales of haute cuisine, but seasoned with myths and stories from a wide variety of times and places—from snail hunting in Burgundy to female chefs in Lyon, and from cheese appreciation in Roman Gaul to bread debates from the Middle Ages to the present. It examines the use of less familiar ingredients such as chestnuts, couscous, and oysters; explores French food in literature and film; reveals the influence of France’s overseas territories on the shape of French cuisine today; and includes historical recipes for readers to try at home.