Students in Cookbooks and History (MET ML 630), directed by Dr. Karen Metheny, researched and recreated a historical recipe to share with the class. They were instructed to note the challenges they faced, as well as define why they selected their recipe and why it appealed to them. Here is the next essay in this series, written by Adrian Bresler.

We were asked to recreate an historical recipe that was over 100 years old for our Cookbooks and History class assignment; I soon discovered that the alternatives were endless. But the Dutch Chocolate Cake recipe in “The Neighborhood Cookbook” seemed to be the right choice for me. With over 42 cake recipes (14 were variations of chocolate cake), this community cookbook, compiled and issued by The Council of Jewish Women of Portland Oregon in 1914 to fundraise for their organization, was filled with recipes written by women whose concise directions communicated to me their expertise and confidence.  How could I go wrong with my choice?  Their first edition, printed in 1912, sold out in ten months.  And since my last attempt at baking a chocolate cake ended in a lumpy mess, now was the opportunity for redemption using a recipe written long ago by women who really knew how to cook.

The Cake section of the cookbook began with a set of general instructions.  Here, the editor reminded readers to measure carefully, to use an earthen dish and a wooden spoon, to never remove a cake from the oven until it is done, and to use a clean broom straw to test the cake.  (Lacking a clean broom straw, I substituted a wooden toothpick). 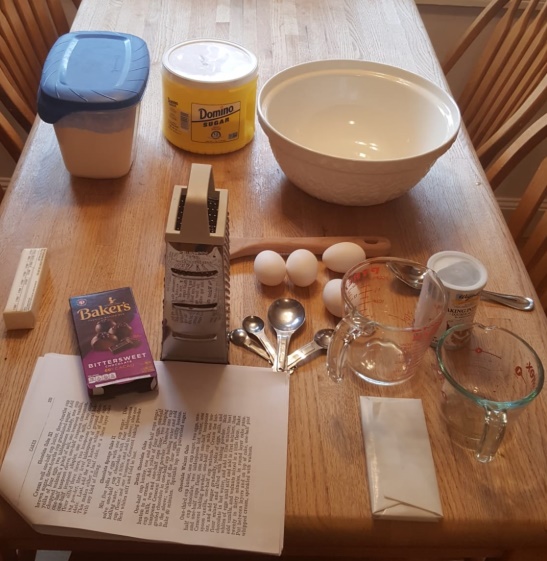 With the introduction over, I was ready to begin to bake.  The recipe I chose consisted of a mere five sentences from start to finish, including a list of ingredients embedded in the short paragraph.  The brevity of the directions gave the appearance of simplicity, a notion that was quickly dispelled when the baking began.

Creaming the butter and sugar with a wooden spoon, rather than using my KitchenAid mixer, took more time and muscle energy but it worked.  No problem so far. The addition of egg yolks, milk, flour, and baking powder was fairly simple, too.  Interrupting the action to fill the tea kettle to boil water, instead of zapping the water in the microwave, was a distraction but not really a problem.  However, grating the Baker’s chocolate squares triggered an unexpected complication.  The friction from the scraping caused the chocolate shavings to go airborne when the particles became statically charged.  Chocolate bits flew through the air and landed everywhere including into the bowl of egg whites, which according to sentence number three, still needed to be ‘stiffly beaten’.  The sight of chocolate flecks floating in the egg whites caused me some grief but just then the tea kettle whistled, announcing that it was time to melt the remaining chocolate with the boiling water.  Here, the brief instructions gave me only vague guidance; I hesitated a moment before pouring the boiling water into the chocolate, rather than adding the chocolate to the water.  It melted.  So far, so good. 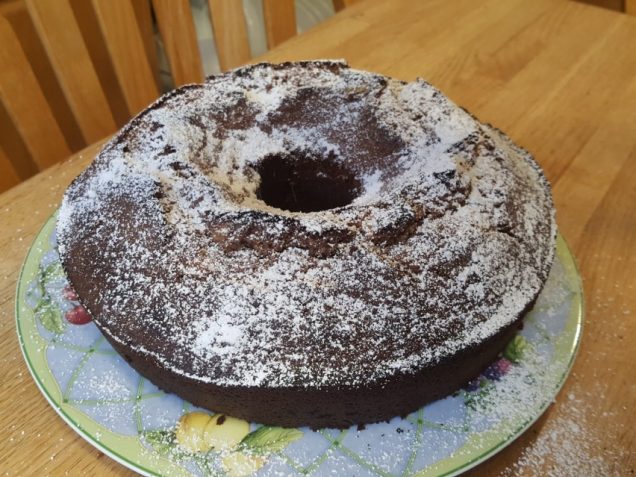 Although electric hand mixers were invented in the late 1800s, they did not become available for home use until the 1920s.  To beat the (already contaminated with chocolate shavings) egg whites into a stiff froth, I turned to my mother’s old manual egg beater.    Compared to the way my grandmother whipped egg whites– with a fork– this seemed fairly easy.  As the recipe gave no further instruction, I simply folded the egg whites, now a bowl of white fluff in spite of the floating chocolate, into the rest of the batter.

With no directions regarding the type or size of the baking pan, I selected an angel food cake pan that seemed large enough to accommodate the batter.  I buttered the pan to prevent sticking since cooking spray was not available to the public until the 1960s.

Remembering to return to the Cake introduction for guidance regarding oven temperature, I found that Layer cake required a ‘quick fire’, Sponge cake a ‘slow fire’, and Loaf cake with butter a ‘moderate fire’. My electric oven generates no fire.  I assumed I was making a loaf cake but I was mistaken.  Setting the oven at 325 degrees, I followed the fourth sentence of the directions (“…bake 40 minutes…”). 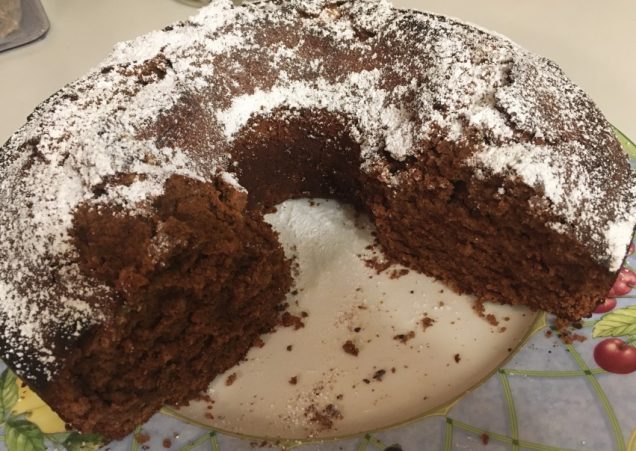 Luckily for me the fifth and last line of the instructions told the readers to sprinkle pulverized sugar on top of the cake as a finishing touch.  Using confectioners’ sugar, I covered up the burned spots.  The cake was a bit dry and crumbly as a result of overbaking.  And the chocolate flavor was muted—perhaps too many chocolate particles flew up into the air instead of into the cake.

But at least it did not turn out to be another lumpy mess.  And my family liked it.  I’ve made progress.

Therefore, I owe a debt of gratitude to the now defunct Council of Jewish Women of Portland.  More importantly, their cookbook helped fund the organization’s mission, which was to help new immigrants, promote women’s suffrage, provide vocational classes, and support other social issues.