Students in Cookbooks and History (MET ML 630), directed by Dr. Karen Metheny, researched and recreated a historical recipe to bring in to class. They were instructed to note the challenges they faced, as well as define why they selected their recipe and why it appealed to them. Here is the second essay in this series, written by Marie-Louise Friedland.

Foods of the Foreign-Born But Make It Bland 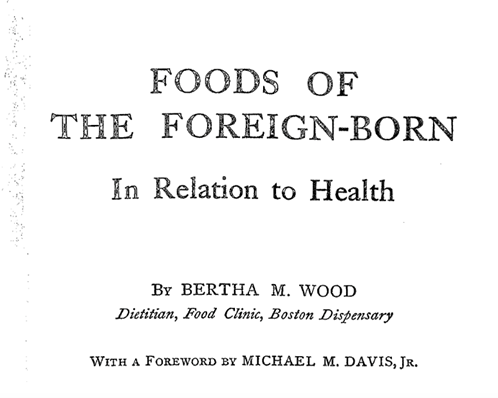 When I saw that we had to recreate a recipe from pre-1930s, my brain was swimming. I could not decide on whether I should focus on an ingredient, a time period, a cooking technique, or a specific cookbook. It was after a topic of discussion for the class that I had my epiphany. I was drawn to what recipes represent, specifically what the subtext is behind prescriptive cookbooks and the recipes within. The cookbook Foods of the Foreign Born by Bertha M. Wood was the cookbook that I was determined to cook a recipe from because I wanted to understand the mindset behind the cookbook.

As stated before, the cookbook falls under the prescriptive type of cookbook in that it acts as a prescription for how to cook to take care of one’s health. In Foods of the Foreign Born, Wood takes it to another level by recommending how to change the foods of different groups of immigrants to a “healthier” version. What I read in this is that the Americanization of immigrant cuisine is the proper way to assimilate into American society and not only will it better one’s health, but it will better one’s chances of becoming more American. As I dive more into the history of American foodways, I’ve slowly become less and less shocked by how desperately Americans wanted to “other” immigrants, but this cookbook stopped me in my tracks.

I decided to recreate a recipe called “Eggs” from the Mexican section of the cookbook. I made this decision because growing up in San Antonio, Texas I was in constant contact with Americanized Mexican food and authentic Mexican food. Those two styles were in perpetual struggle for authenticity but offered a great view of the immigrant cuisine’s treatment in the United States. Just by looking over the recipe, two things immediately jumped out at me. First, the ingredients seemed relatively bland. Second, there was no mention of any cooking utensils or materials. 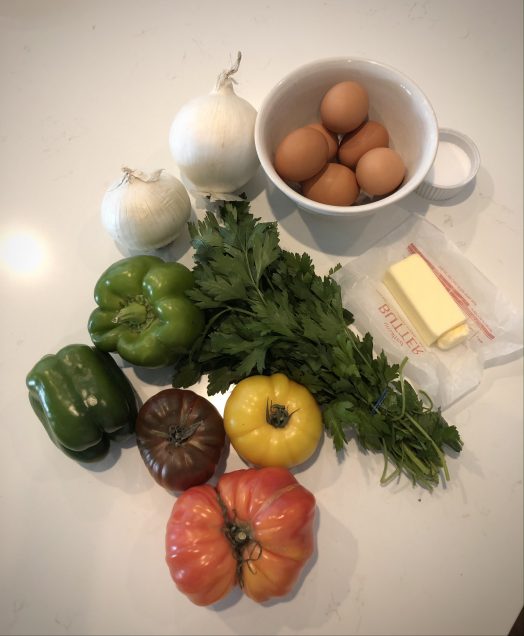 I gathered the ingredients at the grocery store and then started to think through the materials. I knew that the cookbook’s audience was a medical staff or a large hospital because the cookbook discusses diseases that would need medical attention if they went untreated. That fact allowed me to pick very sturdy and affordable cooking materials that would most likely be used by a staff. I decided to use all wooden utensils, a cast iron pan and ceramic bowl and serving dish. Once that was sorted the next mystery I had to solve was how to cook everything. I decided on doing it over fire to mimic a gas stove which is most likely what these medical establishments had for cooking. I used our grill that had a moveable grate so I could control the heat level under the cast iron. The recipe itself was pretty simple to recreate because everything went into the pot and as cooked down and then poured on top of six fried eggs. 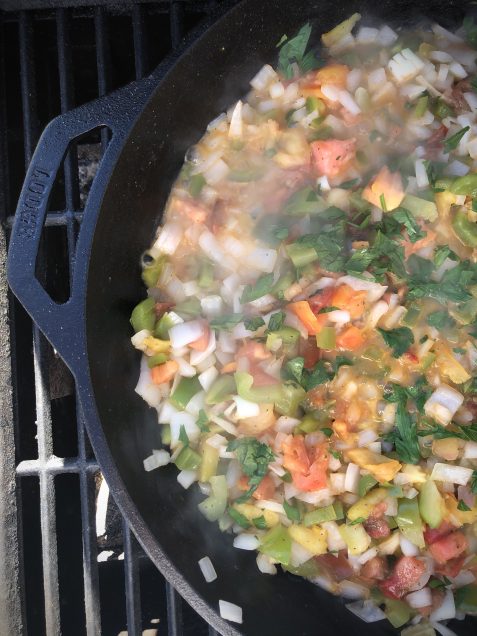 I am not a master chef so it was quite easy for me to stay true to the recipe. There is always a gut instinct to stray from the recipe to make it edible, but I really wanted to get into the frame of mind of the author. I thought it was important to cook the recipe the way Wood prescribed it to be cooked because I wanted to taste it the way she intended it. This would allow me to fully understand the Americanization of a Mexican dish that was supposedly healthier than the original dish. There were a few improvisations I made that impacted the end result. I cooked it 5 minutes longer than it said to do so because I don’t think I chopped the vegetables fine enough to have them quickly cook down into a sauce. I also added a pinch more parsley in the hopes that it would add a little bit more flavor. There were also no instructions on how to fry the six eggs so I did fry them in about a tablespoon of butter in the same cast iron pan that I used to cook the vegetables in. 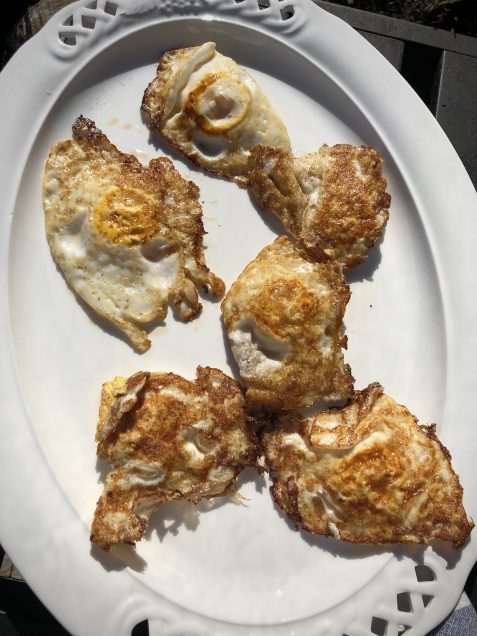 Once the cooking was done, I had my husband and stepfather try it and both said it was bland. My husband who is a chef and grew up in Mexico was not impressed. My stepfather added lots of hot sauce and had two helpings of it so it’s safe to say that he enjoyed it after he added his own flavor to it. The fact that the result was a plate of bland, sauteed vegetables over fried eggs was not a surprise to me considering that the recipe was intended to be healthy and help reverse some diet-related illnesses. My gut was telling me to add flavor or treat the recipe like migas to make it more enjoyable, but I knew that the whole point was to Americanize an immigrant dish under the guise of making it healthier. 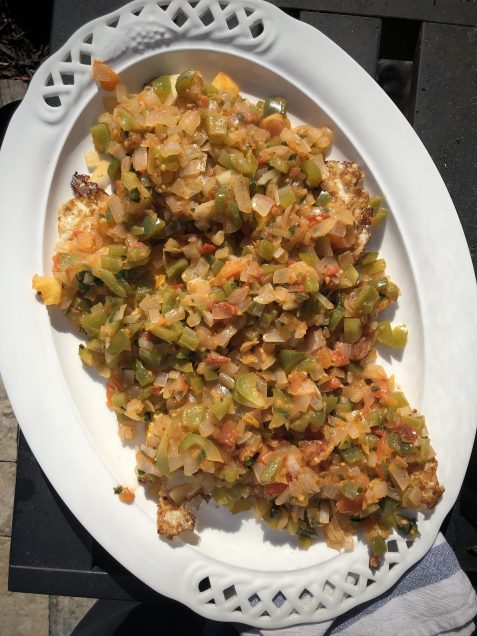 The recreation of this historical recipe provided me with an incredible insight into the style of prescriptive cookbooks. The distaste for immigrant cuisine is evident in Foods of the Foreign Born although it uses the concept of healthy cuisine as a remedy for diet-related ailments to hide behind.  Next time I am going to make migas.