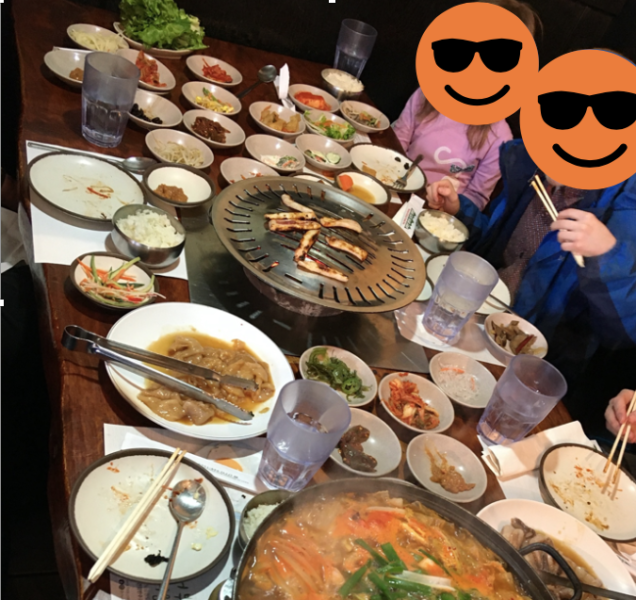 Doesn’t this look like a feast? At this Chicago Korean barbecue restaurant, grilling your own food is only part of the draw. (That’s marinated octopus cooking on the tabletop grill in the center.) It’s when the server brings out the banchan, small side dishes, that the fun begins—and keeps going and going. The dishes just keep coming:  kimchi, of course; salads of cucumbers, broccoli, and potato; and preparations of vegetables like lotus root, bean sprouts, radish, and eggplant. Diners don’t order banchan; they are chosen and provided by the restaurant. Our party of five, including two children (whose faces are covered in the photo), received thirty-one small dishes of banchan.

This was impressive, and certainly made it feel like a celebratory meal. But seeing more dishes than could fit in a single layer on the table also triggered my food waste radar. It caused me to consider how subjective the idea of waste can be. What looks like wasteful behavior to some might look like generosity to others. I wanted to think through my own subjective, culturally-based view of what constitutes food waste and reflect on how my thinking and actions contribute to the problem.

According to Food Cultures of the World, “the Korean table is communal; all side dishes are shared. Koreans are very social eaters and love eating with family, friends or coworkers.” (Albala 2011, 141) Though meals at my home are also served family-style, the dishes are fewer, which made this spread feel excessive. Experiences at other restaurants conditioned me to expect eight to twelve different banchan (even fewer are common at in-home meals (Cwiertka 2003)), so I was surprised by the number of dishes the first time I dined at this particular restaurant.

Cecelia Hae-Jin Lee, quoted in HuffPost, notes that when it comes to banchan at home, “whatever isn’t used is saved for the next meal—so it’s not a waste.” (Bratskeir 2017) This would not meet health codes in a restaurant, however, and as banchan can be difficult to take home as leftovers, more is discarded. As Jonathan Bloom, author of American Wasteland: How America Throws Away Nearly Half of Its Food (and What We Can Do About It), points out, American restaurants serve ever-increasing portions, and that “chefs want what they serve to appear generous.” (Bloom 2010, 133) Americans seem to believe that quantity equals value. The more on offer, however, the more opportunity for waste. In this case, even though the serving of each banchan was small, they added up to a large volume.

However, restaurant owners are always looking for ways to trim costs. Decreasing plate waste saves money on ingredients, labor, utilities and disposal. Even in a cultural setting where multiple small dishes are an important part of the meal, restaurant owners can look for ways to cut back on waste. Our table was served multiple dishes of the same item, for instance, which is unnecessary if the restaurant has a policy of allowing free refills on banchan, as many do. Noting this policy on the menu informs first-time patrons and might also encourage returning customers to ask the server not to bring any banchan the customer doesn’t want to eat, knowing they can have more of the ones they like.

So, is this a picture of waste or of hospitality? It is fair to say we over-ordered because, as first-time patrons, we weren’t prepared for the serving sizes or number of side dishes. It is also possible to argue that, while generous, the restaurant is providing too much banchan for a party of five. We took home most of the banchan remaining at the end of the meal, as well as the grilled meat and the cauldron of seafood stew at the bottom of the photo, which made four more meals. I think this picture shows opportunity—to be more cognizant, as eaters or restaurateurs, of what we can be doing to save food from going to waste.

Bloom, Jonathan. 2010. American Wasteland: How America Throws Away Nearly Half of Its Food (and What We Can Do About It). Da Capo Press: Cambridge, Massachusetts.