This guest post is part of a continuing series written by students from Karen Metheny’s Cookbooks and History course. Ilana Hardesty details the challenge of making a historical recipe for boiled rice dumplings in a modern kitchen.

Let’s be honest:  there’s only so far I can go in simulating 19th century cookery.  I have a 21st century kitchen (literally; it was gutted and renovated, painfully, in 2017).  I live in a city, so I can’t build myself a wood-burning fireplace in which I can set things to the fire; I’ve got a Bosch dual-fuel range.  I won’t be terribly successful with “pounding” my spices, as I don’t own a mortar and pestle, and can’t at the moment justify purchasing one for the purpose.

On the other hand, in terms of other responsibilities, I’m pretty well equipped.  At the moment I’m nursing a husband with pneumonia, and fighting illness myself. I’m doing laundry (granted, in my modern washer and dryer), cleaning, trying to keep ahead of the falling leaves in the yard, and thinking about the 15 people due at my house for Thanksgiving in a couple of weeks.  Perhaps I should be making items from the ‘caring for invalids’ chapters so often found in historical cookbooks. I could use a strong cup of beef tea right about now.

Instead, I’m trying Juliet Corson’s “Boiled Rice-Dumplings” (Corson 1885, 463-464).  I wanted to make a boiled pudding, thinking that would be a better simulation than something in my electric oven.  And these dumplings seemed a bit out of the ordinary. Essentially, they’re baked apples, except boiled, and with a rice “crust” rather than pastry (sort of an early, sweet, boiled arancini?).  I wanted to stay away from a pastry because I’m terrible at making pastry even in 2019. I would surely fail an 1885 puff “paste!”

The recipe calls for six apples to be cored and peeled, and flavored by adding “sugar and spices” or “any good jelly or marmalade” into the tunnel left by the core.  The apples are then wrapped in a layer of cooked rice, tied up in a “pudding-cloth,” and boiled for an hour. 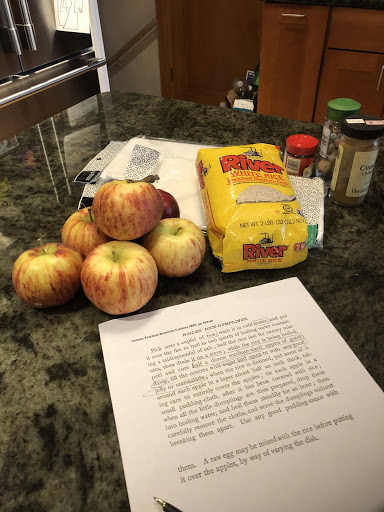 I assembled my ingredients, all purchased at the Watertown Stop & Shop.  I did not need to pick over or wash my River® Rice, of course. Without a grain length specified, I went with medium grain rather than long grain (figuring medium grain would stick together better).  The apples are locally grown. They are Cortlands – the smallest I could find; do they give apples growth hormones these days? – as a substitute for Pippins. I used cheesecloth as an approximation of “pudding-cloth.”  I suspect I’d have been better off sourcing muslin or sacrificing one of my kitchen towels to the cause. In this round, I went with the “sugar and spices” option, and mixed up a bowl of white granulated sugar with pre-ground nutmeg and cloves (none of the recipes I looked at for any puddings called for cinnamon, but many called for nutmeg and cloves).

I set the rice to “boil fast for twenty minutes,” then drained it “on a sieve” (well, through a sieve, actually). 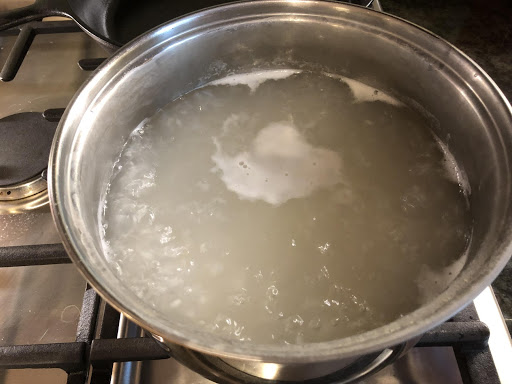 As that was happening I peeled and cored the apples.  Did I take refuge in my OXO peeler and corer? Yes I did!! 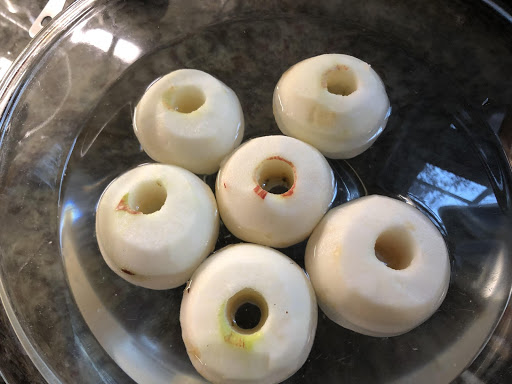 Then came the tricky part, where I was instructed to cover each apple with a half-inch thick layer of the cooked rice, somehow AFTER I’d filled the core with sugar!  Now I think of it, perhaps I was meant to have left the bottom of the apple intact. Instead, I devised an assembly that appeared would work, until it didn’t. I spread a layer of rice on my cheesecloth, wide enough in diameter, I figured, to be pulled up around the apple when I cinched the cloth.  Then I put the apple in the center of the rice, spooned in the sugar mixture, topped with more rice, and pulled together the corners of the cloth, to tie them tight around the rice-covered apple. 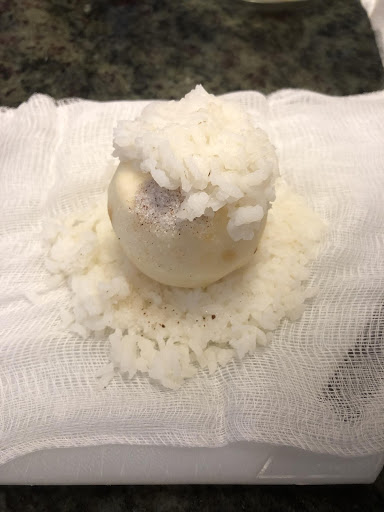 Unfortunately, I ended up with only enough rice to make four, not six, apples.  Did I use too much rice on each apple? It didn’t seem that way. Are today’s “small” apples even too big for the recipe (which actually calls for medium apples)?

Here they are, just after being put into the pot of boiling water.  They float! 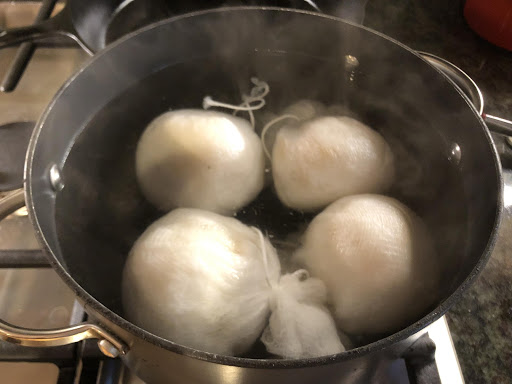 There was no indication of what to do when they came out of the boiling water, so I set them on a rack to drain for a few minutes, and then gingerly opened one packet. 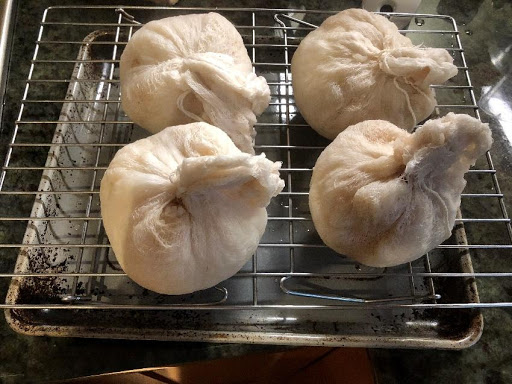 Amazingly, they held together! 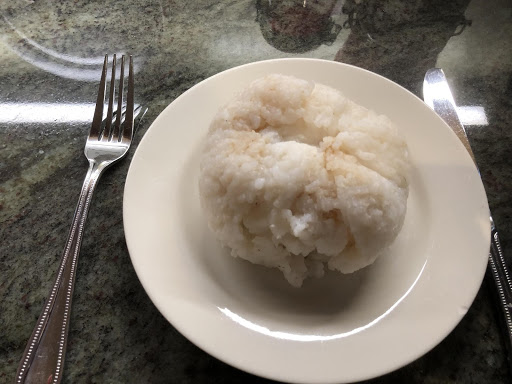 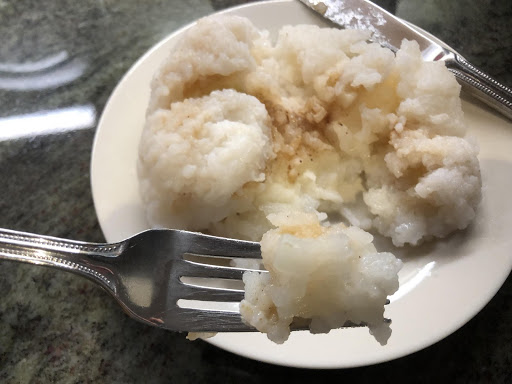 And the verdict?  They’re odd. Not inedible, but not delicious.  Perhaps I was expecting/wanting something much more sweet and dessert-like.  The rice got more gluey, and so held together. And, while I haven’t investigated the science, I suspect the pectin in the apple helped it keep its shape during cooking as well, as happens with a regular baked apple.  The texture is almost doughy, and the apple sort of melds with the rice.

Next time, I may try (and I know I’m changing too many variables):

The cooking gods are evidently after verisimilitude.  This morning, the coldest day since last winter, the furnace blew.  So, no heat and a pneumonia-sufferer to keep warm. And also cooking to do.

This round was easier, since I’d done it once, but no less fiddly.  Who had the time to surround these apples in rice and wrap them in muslin??  I made the recipe as written, and did not add the suggested egg. I used smaller apples, so managed to get five made this time around.  Still not the six the recipe says I’ll get, but closer. Also, after perusing modern recipes for baked apples, I did not use the apple corer this time.  Instead, I used a paring knife to cut around the stem end, then used a small spoon to scrape out the core and seeds, while leaving the bottom of the apple intact. 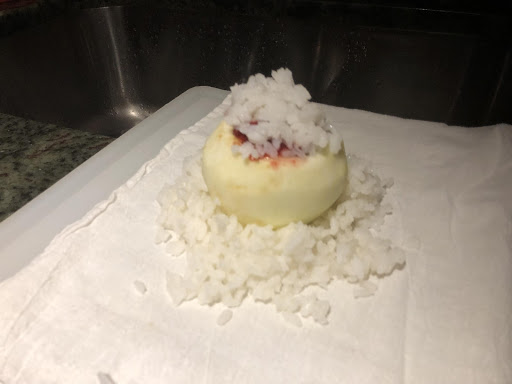 I cut up a cotton kitchen towel to use instead of cheesecloth, and that was easier to manipulate.  I developed a process where I just mounded rice around the apple, and manipulated it into place as I pulled up the cloth around the apple.  This time I tried a jelly – a homemade cranberry-apple sauce made with the leftover apples from Monday, sweetened with a bit of sugar and flavored with spiced boiled cider.  I will not manage a pudding-sauce, though I know a good sauce makes anything taste better.

These were not, somehow, as aesthetically pleasing (perhaps the color of the cranberry sauce was to, um, visceral?).  Also, the apples disintegrated a bit more this time. Though they apples were picked from the same bin, perhaps some other varieties ended up in the mix, and these did not hold their shape as well.

The verdict this time, from the class, was positive!  We all agreed that this is not necessarily a dessert, but might be a nice sweet accompaniment to, for example, a roast pork dish, with a fruit-based sauce.  There is work to be done in getting them out of their pudding-cloths intact, but it may be that the problems I had with that were because they had been cooled and then reheated.  Perhaps the rice had a chance to fuse to the cloth more than if I’d served them straight from the boiling pot.

Overall, this was a fascinating experience.  I was hyper-aware of the conveniences that I have that Juliet Corson and her readers did not.  But I was also hyper-aware of the cooking knowledge I have, and of my ability to infer and adapt with very little recipe detail.  I look forward to taking on this challenge again with other recipes, for myself! 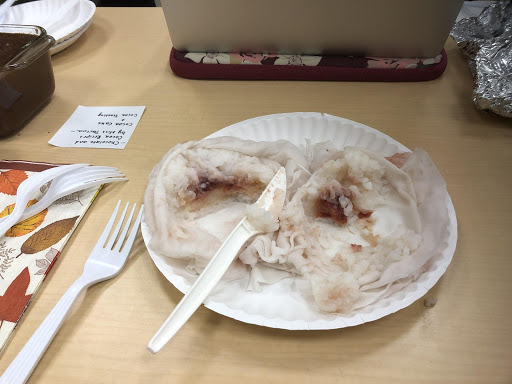