There’s no doubt that Gastronomy students have a passion for food, but sometimes it helps to have some professional insight into how we can turn that passion into a career.  With many of our peers taking advantage of Boston Globe dining editor Sheryl Julian’s food writing class, and increased interest in visiting places for their food and beverages as much as their sights, a career in food writing and culinary tourism is on the minds of many students.  On Thursday, February 6th, 2014, the BU Gastronomy Students Association hosted a discussion panel that addressed those career paths.  The event featured Catherine Smart and Peggy Hernandez, both reporters for the Boston Globe’s dining section, as well as Lauren Cicione, who organizes wine tours in Italy for connoisseurs.

Catherine Smart is a graduate of the BU Gastronomy Master’s program, and, when she is not submitting articles to the Globe, she is working hard as a personal chef.  As most writing gigs are freelance and don’t provide a steady source of income, Smart says it’s a good idea to have another job.  She is thrilled with her personal chef business, which she finds both enjoyable and lucrative, and recommends students take the Culinary Arts Laboratory if they wish to follow in her footsteps.

Smart also advises that persistence and networking are key in developing a career in food writing, with which Peggy Hernandez couldn’t agree more.  A longtime Globe veteran, Hernandez began her career as a news reporter covering “crime and grime” in the late 80s and early 90s before her husband’s job had them moving abroad.  Upon returning to the US, Hernandez began freelancing for the Globe’s dining section and is known for her in-depth coverage of food trends. Both Hernandez and Smart strongly advise writers to join networking sites such as Muck Rack and LinkedIn to help brand themselves as serious writers. 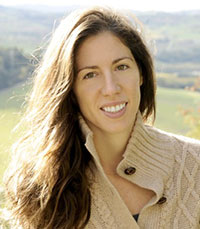 Lauren Cicione got her start in culinary tourism quite by accident.  Working in the New York City art world, she was no stranger to wining and dining.  Once the recession hit, the market for fine art dwindled, and Cicione decided that a sojourn in Italy would be ideal.  It was there that she befriended small wine producers in Piedmont and Tuscany, and, before long, had an exclusive business organizing Italian wine tours for the most discerning connoisseurs.

Like Smart and Hernandez, Cicione says that networking is key, as the majority of her clients are referred to her by word-of-mouth.  She also says that it is important to do your research when planning to start a business: look at your competitors to see what they’re doing and how much they’re charging, and don’t forget that your time and knowledge are valuable.  Beware of selling yourself short, while you want to be reasonable, you have to keep in mind that you are offering your talents and, especially to those in the Gastronomy program, your educational background.

The best news is, there are many people who are willing to help you along the way.  Professors are a great resource to help launch your career, and many people are more than happy to offer their assistance or advice.

For those who missed the panel discussion, a digital recording is available on request by emailing gastronomyatbu@gmail.com.

Carlos Olaechea was born in Peru and spent most of his life in Miami, FL before moving to Boston for the gastronomy program.  He was the dining columnist for his college newspaper and the Miami dining editor for Joonbug.com.