My name is Nicole Carr. This is my first semester as a graduate student at Boston University in the Biomedical Engineering Ph.D. program. I wanted to rotate in Chand’s lab to dive into the world of computational neuroscience and gain experience working with monkeys as a model organism for behavioral research and neural engineering.

I began by learning about UMAP, a new technique in machine learning for dimensionality reduction for visualizing large, multidimensional data sets. Extracellular waveform recordings are most often classified into narrow and broad spiking neurons. However recent research has shown that the UMAP algorithm is able to reveal more diverse waveform features in rhesus macaques. Using WaveMAP, an algorithm developed in the Chand lab to combine UMAP and graph clustering for waveform analysis, I analyzed waveform data collected by Dr. Economo’s lab from layer 5 pyramidal tract (PT) neurons in mice. 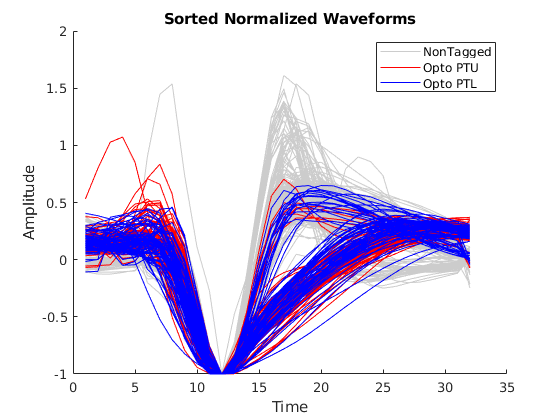 I created a MATLAB program to extract high-quality waveforms and separate relevant features including the optogenetic tagged PT upper and PT lower neurons.  Notice the optotagged PT upper neurons (red) and the PT lower neurons (blue) with very distinct waveform shapes compared to the untagged waveforms (grey). After extracting this data set, I used WaveMAP to cluster the waveforms.  The algorithm found three clusters containing seven distinct waveform shapes as seen in Figure 2. Figure 3 describes the same clustering separated into categories of optotagged PT upper neurons (red) and PT lower neurons (blue). It is notable that no untagged waveforms were found in the tagged cluster. I also used this algorithm to explore the AllenBrain Institute neuropixel spike data set. By working on these computational analysis projects, I was able to greatly refine my coding skills in MATLAB and Python.

During my rotation, I was also able to learn protocols that are necessary for monkey lab work. Before I was able to come into the lab, I completed several online, then in-person training as required by IACUC and ROHP for involvement in non-human primate research. After much observation throughout my time in the lab, I became more familiar with the monkeys as well as procedures for chairing and behavior training. I also worked on a small project for the rig to record how much juice/water is consumed by the monkey during a behavioral session.

I designed and built an electronic circuit that would display this amount in real-time on an LCD using a continuous fluid level sensor in the juice bottle. The fluid level sensor outputs a variable resistance which is inversely proportionate to the liquid level. Using a microprocessor, I converted the resistance into a measure of volume remaining in the juice container. This was programmed on an Adafruit Metro (compatible with Arduino)using C++.