We work on a variety of topics related to the Earth’s space environment, space weather, and space technology. With an increasing reliance on the space environment for human endeavors, an understanding of this region and the governing physics is critical. Our group uses and develops spacecraft and instrumentation for studying this space environment. The research spans from small satellite and instrumentation development, to analysis and modeling of space plasma physics, to development of novel space technologies. Several ongoing research programs are described below.

Small Satellites or cubesats can be as small as a loaf of bread. These spacecraft can serve as a test bed for new and developing space technologies as well as a platform for new measurements of the space environment. The Space Physics and Technology Lab is leverages this developing platform in developing a number of small satellite missions.

The team leads the CuPID (Cusp Plasma Imaging Detector) Cubesat Observatory (CuPID mission site). CuPID is a NASA supported spacecraft carrying a miniaturized soft X-ray imaging telescope. Soft X-rays can result from the process of charge exchange and allow researchers to remotely image the global properties of density in space. The miniaturized telescope has been tested on two NASA sounding rocket experiments (NASA press release, launch 1, launch 2) and was launched into orbit in 2021 from Vandenberg Space Force Base.

The ANDESITE spacecraft (ANDESITE mission site) is developed to make constellation measurements of the magnetic field in the Earth’s aurora. The main spacecraft deploys six sub-payloads. The full constellation will make measurements that are transferred back to the ground for science analysis.

LEXI is an x-ray telescope under development for deployment on the lunar surface in 2024 as part of NASA’s Artemis program. The mission is a multi-institutional collaboration will use a wide field-of-view X-ray telescope to measure the motion and shape of the Earth’s magnetopause to study magnetic reconnection.  More information can be found at the mission website. 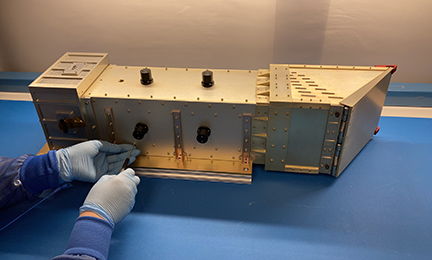 The majority of the energy that drives geomagnetic storms and disturbances is extracted from the flowing solar wind. How and under what conditions energy is being transferred into the Earth’s magnetosphere are questions we seek to answer.

Below an illustration depicts a plume of plasma streaming from the plasmasphere outward to the magnetopause where it can help shield the magnetosphere from the solar wind. See NASA press release.

Artist’s rendition of a dense plasma plume streaming from the Earth towards the sun. Illustration based on Walsh et al., [2014] study. Credit: NASA/Goddard Space Flight Center

The SMILE mission is a collaboration of a number of organizations including the European Space Agency (ESA), the Chinese Academy of Sciences (CAS), and NASA. We’re active in instrument and scientific modeling in support of the Soft X-ray Imager (SXI). The SXI instrument will measure the same emission being studied by the CuPID Cubesat Observatory described above and being developed at BU. The objectives of the SMILE mission are to understand the system-level coupling and flow of energy from the solar wind into the magnetosphere, ionosphere, and thermosphere. The mission is under development is scheduled for launch in 2024.