Students from Karen Metheny’s Cookbooks and History course are contributing guest blog posts about their assignment to recreate a historical recipe. The first of this series comes from Kaya Williams.

A Taste of the Past: Real Shrewsbury Cakes

Consider this a recipe for adaptability: Take one 19th-century recipe and combine with 21st-century technology. Sprinkle in a nearly-forgotten deadline and a pinch of last-minute grocery shopping (be careful not to overseason with hustle). Place in a tiny and sparsely-stocked kitchen for one to two hours and bake until cooked through.

It was a baking experience unlike any other I had encountered: a centuries-old recipe modified for the present day, with challenges and delights alike spilling out of the bowl. In the process of baking “Real Shrewsbury Cakes” from Priscilla Homespun’s The Universal Receipt Book (1818), I became hyper-aware of the ways in which my modern kitchen could compromise the integrity of the historical recipe.

As soon as I began preparing the cookies, I realized just how historically inaccurate my kitchen could be, with anachronisms baked into this five-ingredient recipe. 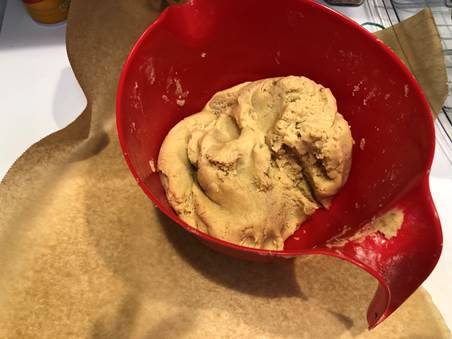 I deliberately selected a recipe whose ingredients would not be impossible to find, avoiding entries that featured rosewater, pearlash, or lively emptings. But as I ticked off the items on my shopping list, I began to realize that even though the ingredients were the same in name, they may not have been manufactured by the same process. The all-purpose flour I used was likely machine-ground, giving it a finer texture than flour produced in an older mill.

Likewise, the butter I used was mass-produced and kept rather firm in refrigerated transport, making it more difficult to combine with dry ingredients than would have been the case with home-churned or locally-made butter. The “powdered loaf sugar” that I used — sold in plastic packaging at Whole Foods — is also a far cry from that which may have been available at the time the recipe was created; I imagine that my store-bought, pre-ground cinnamon from Trader Joe’s is not what the cookbook’s author had in mind when she called for “a dram of beaten cinnamon.” Without close proximity to a chicken farm, the eggs I used weren’t nearly as fresh as they may have been for a home cook in the 19th century who may have owned their own chickens. 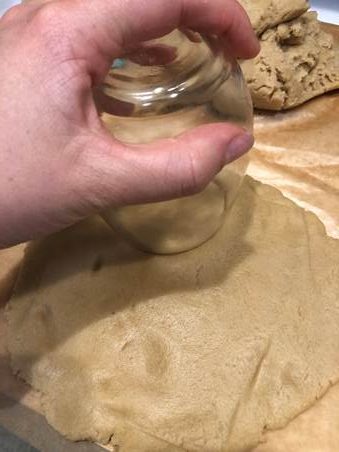 Though my ingredients were lacking in historical veracity, the confines of my modern kitchen may have been the greatest influence on the recipe’s temporal accuracy. Nearly every tool I use for preparation was made of plastic or silicone — materials not invented nor used commercially until nearly a century later (Science History Institute, n.d.; SIMTEC 2016). My stove and oven are fueled by electricity, not gas or a wood-burning flame. And it was near-impossible not to glance at the digital clock on my microwave to keep track of time — a privilege in which no 19th-century cook could indulge. But my greatest historical inaccuracy was also the one thing preventing my recipe from disaster: lacking a kitchen scale, I used Google to find conversions from weight to cup and tablespoon measurements. It’s a tool no 19th-century (and very few 20th-century) chefs could use to ensure that their recipes would succeed, but if I was going to present the finished product to others, I knew I couldn’t eyeball the measurements and still produce something edible.

Nevertheless, some techniques were maintained if for nothing else than a lack of equipment, like hand-mixing dough (I do not own an electric mixer). Instructions to cut the dough using a wine glass were easy enough to follow, and though I didn’t have a rolling pin, a drinking glass sufficed to flatten the dough. Likewise, the parchment paper I purchased was unbleached and sold in cardboard packaging — not too far off from the quality and consistency of paper available in the 1800s. 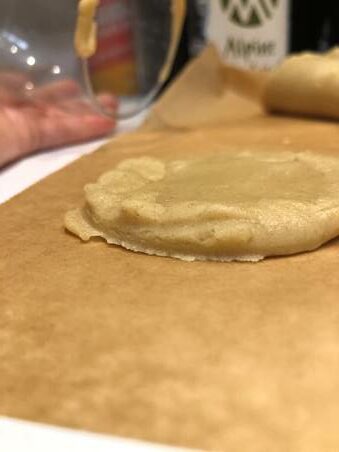 I also incorporated some of my own baking knowledge to ensure baking success; rather than combining all ingredients at once, I first cut the butter into the flour as I would a pie crust to avoid a sloppy, sloshy mess, and I knew that a 350-degree oven would be standard enough that it would bake the cakes through without burning them. (Whether or not it was actually a “quick” oven, I wasn’t entirely sure.) When instructions called for the dough to be rolled “out thin enough for an ounce weight of the paste to make a cake as large as the top of a breakfast cup or basin” or rolled out somewhat thicker to be as large as the top of a wine glass (Homespun 1818: 20), I reverse-engineered the measurement by first balling an ounce of dough and flattening it to fit the space, then using that as a point of reference for rolling out the rest of the dough. 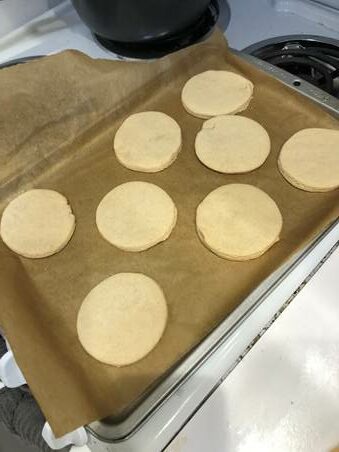 The greatest challenge wasn’t time or equipment but physical space: though the recipe’s ingredients weren’t outrageously proportioned, my kitchen is so small that I could not roll out all the dough at once. (Even rolling out half the dough at one time at the designated thickness began to spill over the edge of the counter). I also had to bake the dough in batches of eight on half-size baking sheet, as my oven is too small to fit a full-size sheet.

Even so, the final product — two dozen pale, shortcake-like cookies — was a success by most metrics. Though I personally prefer a moister cookie (and thus found these “Real Shrewsbury Cakes” rather dry), several tasters with an affinity for shortcake found them tasty. It’s unlikely that I’ll return to this recipe again, but the relative ease of producing the recipe made me eager to explore the possibilities that await in the world of historical cookbooks. Perhaps the best treats aren’t the newest but the ones proven tried and true by time itself.