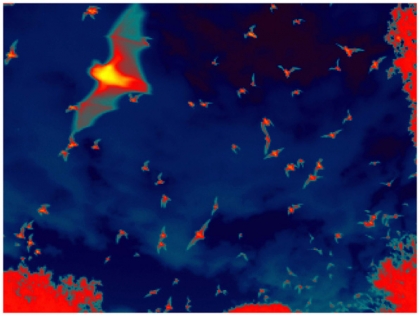 Can studying the flight dynamics of bats, birds and insects lead to a new generation of unmanned aerial vehicles that can navigate more effectively in cluttered environments? To maneuver as well as winged animals in tight places such as forests and caves, and land as safely on variable and moving terrain, an engineered system would have to incorporate unprecedented sensing and control capabilities while satisfying complex physical design, weight and computational requirements.

Aiming to build a process for translating biological capabilities for agile flight in a range of environments for engineered flight vehicles, the Office of Naval Research (ONR) has awarded a five-year, $7.5 million grant to a team of researchers from Boston University, the University of Washington, the University of Maryland and the University of North Carolina at Chapel Hill.

Computer reconstruction of a 3-D Lidar image. Images of actual animal habitats will be used to reconstruct animal flight paths through the imaged habitats. (Image courtesy of Xiaoyuan Yang, a graduate student in the BU Department of Geography and Environment.)

Operating under a $3.1 million subcontract, the Boston University team includes Professors John Baillieul (ME) and Ioannis Paschalidis (ECE) and Assistant Professor Calin Belta (ME) in the College of Engineering; and Thomas Kunz, professor of biology, and Margrit Betke, associate professor of computer science, in the College of Arts & Sciences. The project’s principal investigator, Kristi Morgansen, associate professor of aeronautics and astronautics at the University of Washington, received her B.S. and M.S. degrees in mechanical engineering from Boston University in the mid-1990s.

Combining expertise in birds, bats and insect flight as well as in sensor and control systems, the researchers will study the dynamics of winged creatures on a neurological level, in the laboratory and in free flight. By carefully examining how diverse airborne species sense their environment in forests, caves and other cluttered spaces and use that data to control their movement, they could help engineers design more agile unmanned aircraft for military, disaster recovery and other applications.

Entitled AIRFOILS (Animal Inspired Flight with Outer and Inner Loop Strategies), the project seeks to develop techniques to balance long-range goals, such as reaching a final destination, with short-term navigation, such as avoiding obstacles or sustaining wind gusts.

In one scenario, biologist Thomas Kunz will image bats flying through forests with high-speed, high-resolution, thermal cameras; computer scientist Margrit Betke will convert Kunz’ raw image data into a three-dimensional computer model of bat trajectories through a forest; and Baillieul, Belta and Paschalidis will use the computer-reconstructed bat trajectories to develop flight control algorithms that approximate the bat flight, and ultimately test them on real vehicles.

Recognizing that bats and other winged creatures often fly in formation, the College of Engineering team’s work will leverage their previous research on multiple robot formation control and feedback control of mobile vehicles.

“We’ve worked with ground-based robots and operated them in formation,” said Bailleiul. “The goal is to take what we know about controlling groups of mobile robots and apply it to aerial vehicles that must rapidly maneuver through clutter.”

A former student of Bailleiul’s who became an expert in the control of aerial and underwater vehicles, Morgansen has built robotic fish and studied how schools of fish navigate underwater. For AIRFOILS, she is expected to develop sensors to place on the flying vehicles that mimic the many simple sensors used by bats and other winged animals to gather critical information about their environment.

AIRFOILS is funded through the ONR’s Multidisciplinary University Research Initiative (MURI) program, which supports fundamental research with the potential for commercial and defense applications.