By Elizabeth CoppockSeptember 14th, 2020in News

Poster to be presented at Experiments in Linguistic Meaning (ELM)

By Elizabeth CoppockAugust 30th, 2020in News
Danielle Dionne and Elizabeth Coppock will be giving a poster called “Tattoos as a window onto cross-linguistic differences in scalar implicature” at the first annual Experiments in Linguistic Meaning conference, to be hosted virtually by the University of Pennsylvania, September 16-18:
https://www.elm-conference.net/2020-conference/program/poster-sessions/

By Elizabeth CoppockJuly 16th, 2020in News

Huge congratulations to Ph.D. student Danielle Dionne, who won 'Best Lightning Talk' at the Web Summer School in Logic, Language and Information (hosted by Brandeis this summer, in lieu of NASSLLI). She presented her research on cross-linguistic variation in pragmatics, focussing on what happens when one language lacks a simple, one-word equivalent for a single word in another language.

We are incredibly proud of her for this fantastic achievement!

By Elizabeth CoppockMay 20th, 2020in News

We are very lucky to have BU Ph.D. student Ying Gong working with us this summer. She will be concentrating on degree abstraction especially in Mandarin.

By Elizabeth CoppockMay 20th, 2020in News

We are thrilled to be welcoming Tomiris Kaumenova to our group for the summer. She will be investigating degree abstraction in Mooré and Ende. Congratulations to Tomiris and to us!

By Elizabeth CoppockMarch 14th, 2020in News

Our large cross-linguistic study on the interpretation of quantity superlatives has officially been accepted for publication at Language! We are very excited.

The paper, entitled Universals in Superlative Semantics, and authored by Elizabeth Coppock, Elizabeth Bogal-Allbritten, and Golsa Nouri-Hosseini, reports on the results of a broad cross-linguistic study on the semantics of quantity words such as many in the superlative (e.g. most). While some languages use such a form to express both a relative reading (as in Gloria has visited the most continents) and a proportional reading (as in Gloria has visited most continents), the vast majority do not allow the latter, though all allow the former. It is argued that a degree-quantifier analysis of quantity superlatives is best suited to explain why proportional readings typically do not arise for them. Based on morphosyntactic evidence, two alternative diachronic pathways through which proportional quantifiers may develop from quantity superlatives are identified.

You can read the accepted version here.

By Elizabeth CoppockFebruary 28th, 2020in News

Danielle Dionne and Elizabeth Coppock have had their abstract accepted as a poster at the very first Experiments in Linguistic Meaning conference, to be held in Philadelphia. The title of the submission is:

Tattoos as a window onto cross-linguistic differences in scalar implicature

From one of the reviews: "This poster is NOT about tattoos, much to my relief. (The title will surely turn away interested consumers.)"

By Elizabeth CoppockJanuary 9th, 2020in News

The slides are available here. 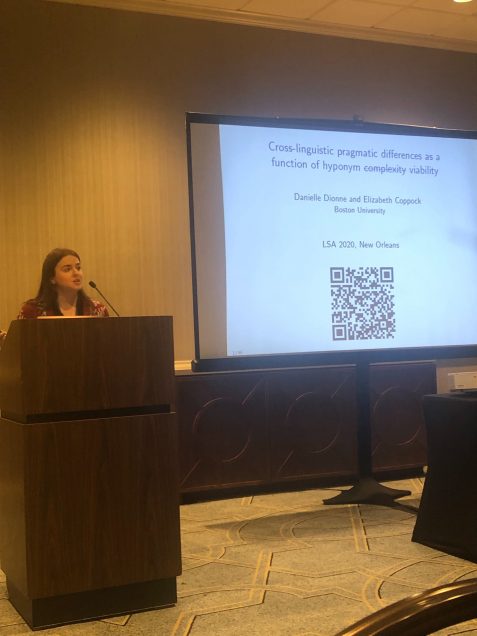 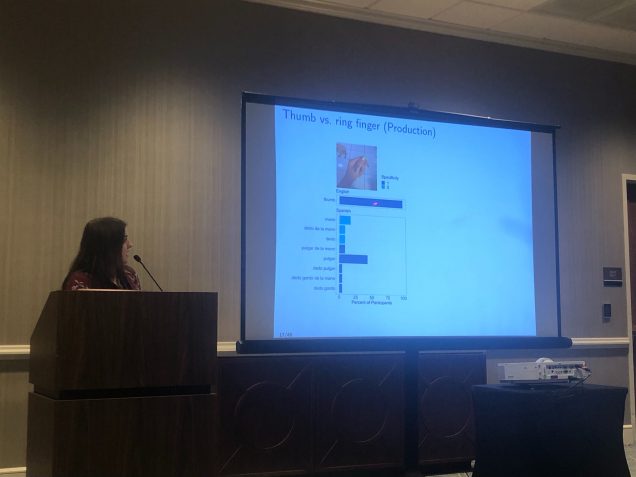 By Elizabeth CoppockDecember 20th, 2019in News

Alex Acosta has received an award through UROP to pursue an original research project on polarity particles. Specifically, he will be investigating cases where "yeah" and "no" co-occur, as in: "Yeah no, I agree".

By Elizabeth CoppockSeptember 20th, 2019in News

Anastasiia Tatlubaeva received a UROP award for Fall 2019! She will be studying superlatives in Slavic, especially the morphosyntax of universal standards in superlative constructions in Russian (vsekh vs. vsego).