We continue our series of posts from student’s in MET ML 619, The Science of Food and Cooking, with Professor Valerie Ryan, with this entry from gastronomy student Adrian Bresler.

We owe a lot to scientists who cure diseases, increase crop yields and even fly us to the moon.  But scientists do not always get it right.  One clear example is related to their unyielding certainty surrounding the impact of dietary fat and cholesterol on health and mortality in the US in the mid to late 20th century.  Here are the facts: Anti-fat sentiment began in full force in the US in the 1980s and continued through the 1990s in response to a number of scientific studies identifying American high fat diets as the main cause of heart disease and the rise in obesity (Johns and Oppenheimer 2018).  Fueled by government agency recommendations, widespread coverage by the media, and increased public interest, food companies were only too happy to launch significant numbers of new low fat and nonfat versions of products heretofore available only in their original ‘full fat’ forms. 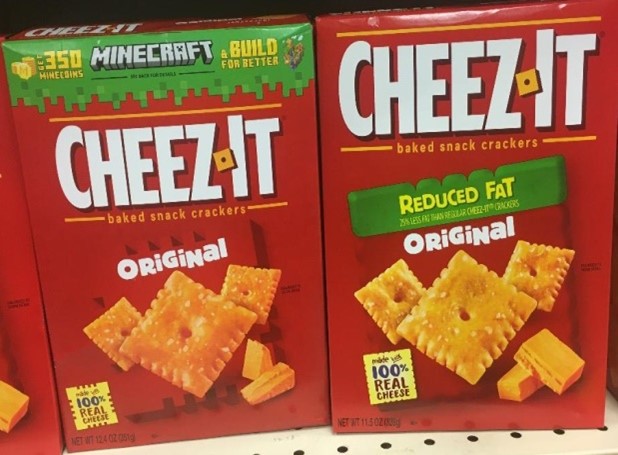 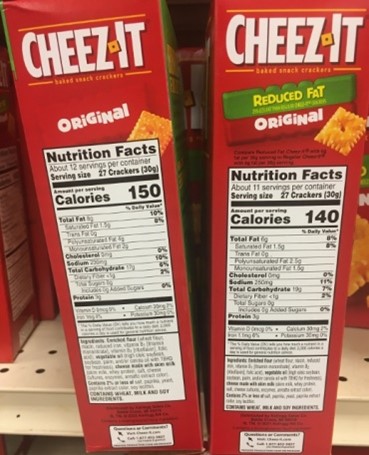 Knowing that the new low fat variants also needed to taste good in order to be acceptable to the American consumer, in spite of the removal of some or all of the fat content, manufacturers found that they needed to substitute or add ingredient(s) that could either mimic the taste of fat or provide mechanisms for making the product taste more palatable (Colla, Costanzo and Gamlath 2018).  The answer often relied on an increase in sugars in various forms.  Moreover, the food industry invested heavily in Research & Development, leading to the discovery of new ingredients never before consumed by humans, or resulting in the introduction of new methods used in food processing that could deliver on the promise to reduce all fats, regardless of type, from diets. These replacements would come in the form of carbohydrates, fats and protein (Frankel Cardiovascular Center 2020).

One of the simplest methods for reducing unwanted fat from baking recipes was to substitute carbs for fats.  Replacements were not only of increased sugars, but also fruit and vegetable purees, gums and fibers (Hayek and Ibrahim 2013).  And while these replacements did not impart all of the characteristics of fats, they could partially replace their texture, mouthfeel, moistures and flavors (Zbikowska and Kowalska 2016).  By using carbohydrate replacements, manufacturers could also claim the advantage of using “naturally occurring ingredients” despite a similar calorie load to the full fat product.  This “natural” substitution had the support of many cookbook authors and magazine writers who provided home cooks with recipes that cut out or reduced fats and instead incorporated purees, often apple or banana.  In spite of the scientific studies that showed mixed results in taste tests involving the use of fruit/vegetable purees in baked products, the promised health benefits often outweighed the lack of enthusiasm; for example, cookies, biscuits and crackers were more tolerable to consumers while cakes seemed to turn rubbery and hard (Colla, Costanzo and Gamlath 2018).  The most acceptable versions of the recipes were a combination of purees and a reduced amount of fats (Colla, Costanzo and Gamlath 2018).

In fact, my favorite banana bread recipe from the 1990s called for applesauce instead of butter or oil.  The only fat in the recipe came from the yolk of one egg.  My children loved it—perhaps it was the generous amount of sugar that made it popular, certainly not the banana bread’s texture which resembled that of an eraser after a day or so.

One of the more controversial examples of fat substitutes was a fat-based product, Olestra, developed by Proctor & Gamble (P&G) and introduced to the public in the late 1990s as a core ingredient in ‘Wow’ chips.  The fat normally found in snack foods was replaced by a newly laboratory-developed substance:  sucrose molecules bound with eight fatty acids—constituting molecules too large to be absorbed through the intestine which therefore contributed no calories to the body (Bimal and Guonong 2006).  Unfortunately, the severe gastrointestinal distress they caused, as well as the corresponding loss of fat soluble vitamins required that P&G place a warning label on all bags of Wow chips (Nestle 2013).  What started as a promising new tool in the fight against dietary fat became a case study for business school students.  Few countries permitted the sale of Olestra as a food additive.  Wow chips are no longer sold anywhere. 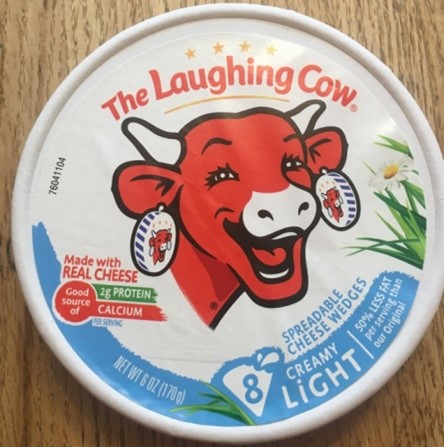 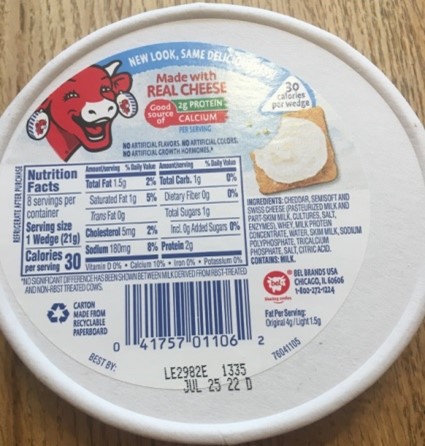 Compare that to the third method of fat substitution:  one centered around protein-based products.  The best example: Simplesse.  Developed by a subsidiary of Monsanto as a fat replacement, Simplesse is a low-calorie whey protein (or egg white protein) concentrate introduced in 1988 that is still found in many products (Widder 1988).  A stroll down the dairy aisle of a supermarket today will reveal a myriad of low fat and nonfat cottage cheeses, spreadable cheeses, ice creams and yogurts that contain the whey protein additive.  The minute particles of whey proteins create the mouthfeel of fat by giving a creaminess to these products that was lost when the original fat was removed (Marcus 2013).  The substitution of whey protein for fat translates to an 85% reduction in calories per gram of ingredient (Haddix 1988).  A shortcoming: the additive can only be used in uncooked food.  Cooking the whey protein denatures the protein and causes it to coagulate.  This has not stopped Simplesse from becoming quite successful;  try to find a full fat yogurt in the dairy case.  Not so easy. 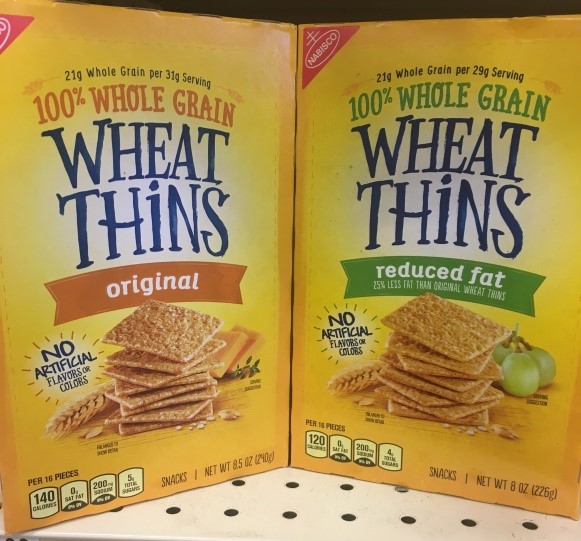 To get a better understanding of the impact of these new foods on the American diet, I spoke with nutritionist and registered dietitian Elyse Sosin, who has over forty years of experience advising and teaching adults and children about nutritional health in NYC. She began by describing the overwhelming influence the low-fat/no fat diet craze had in the late 1980s.  Eating full fat or high cholesterol products bore a stigma.  For example, Sosin distinctly remembers that, at the beginning of her career, the mere act of selecting a plate of eggs in the hospital cafeteria where she worked caused her to be scolded by a colleague, “I can’t believe you’re a nutritionist and you are eating that!”  And, she said, despite the encouragement by professionals writing newspaper columns and magazine articles supporting this behavior, the lack of fat and the inclusion of higher levels of sugar in processed foods left some people feeling hungry –a real setup for weight loss failure.  Through the years she has seen the diet rules change from very low-fat to no-saturated-fat to no-trans-fat to the current rallying cry of low-carb by diet gurus.  These diet regimens, Sosin believes, that declare a particular food or category of food ‘bad’ are often too rigid and can lead to their abandonment on the part of those people following the advice of practitioners and trying to maintain a healthy weight and lifestyle.

Even the Food Pyramid, a presentation of healthy food groups introduced here by the US Department of Agriculture in 1992, placed complex carbohydrates (bread, pasta, rice, cereal) at the bottom or base, suggesting that people consume 6 to 11 servings per day (Sosin 2022).  As a result, the meat and dairy industries suffered.  Fats and oils were at the top along with sweets;  these were the ‘bad’ foods to be eaten sparingly.

So despite the minority of skeptics who questioned the validity of the causal relationship of dietary fat and cholesterol on heart disease and the impact of encouraging millions of people to eat more low fat/no fat snacks by promising them ultimate weight loss, newspapers, magazines and the airwaves flooded consumers with advice about fat avoidance (La Berge 2008).   Did the introduction of these low fat, no fat products improve the diet and overall health of Americans?  Our diet was and is too high in fat. And, according to CDC statistics, approximately 15% of the US adult population was obese in 1980; by the early 2000s that figure rose to over 30% of US adults (Ogden and Carroll 2010).   And by 2018, over 40% (Sosin 2022). Heart disease is still the leading cause of death in the US.  There is no shortage of possible contributing factors:  genetics, sedentary lifestyle, abundance of cheap processed foods, environmental toxins, food deserts, computer games, television, celebrities that promote questionable products, local customs and traditions, ethnic background, government regulations and subsidies.  The list goes on and on.  Therefore, we understand that neither a quick fix nor a single recommendation exists that will address all of these issues.  But the answers will come from those scientists, in a multitude of disciplines, who will need to get it right next time.

McGee, Harold. 2004. On food and cooking: the science and lore of the kitchen. New York: Scribner.

Żbikowska, & Kowalska, M. 2016. The use of apple fiber as a fat substitute in the manufacture of bakery products. Journal of Food Processing and Preservation, 41(6), e13241–n/a.