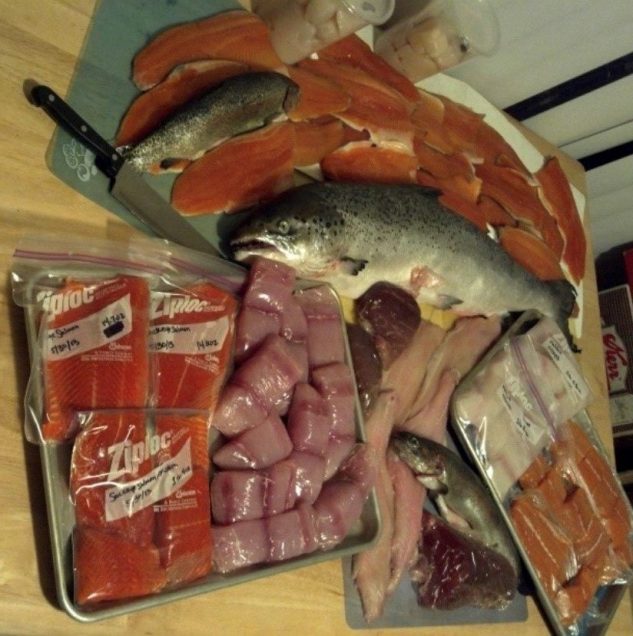 It was an issue of convenience. Or, rather, one of inconvenience — wrapping that much fish just to store it for “some guy” to come pick it up later would cost 20 minutes of employee time twice a week, and that just didn’t make sense for the department. “Those minutes add up,” explained the Meat & Seafood manager, annoyed. I obviously didn’t understand the importance of the bottom line.

So, I watched them throw it away. It was “only” about $400-worth of fish, retail — $300 on a good winter sales week, $250 in the summer. In the trash bin, every Tuesday and Thursday evening at 9. No discounted food sales allowed to store patrons — and donating it, as previously explained, “didn’t make sense.”

I’m not sure how much fish mongers made per hour in Utah in 2013, but it must have been a pretty penny if 40 minutes of time wasn’t worth an $800-per-week tax write-off, or even a few hundred dollars in discounted sales. After briefly considering a career change, I instead decided to persuade them to change this wasteful behavior.

To be clear, I don’t even like fish. The only seafood I like is salmon (likely on account of being allergic to much of the rest of it). I was taking care of my mother at the time and receiving help from the community to pay for most of the grocery bill, so I certainly couldn’t afford to buy the fish. My self-righteous indignation was growing steadily, fueled by passive-aggressive jabs about wasted food.

Then, one day in April, it was too much to handle. We ended Thursday with over ten pounds of fresh halibut fillet. Caught on Tuesday, delivered Wednesday morning. The next shipment of fish was due to arrive Friday morning, so this leftover halibut was destined for the trash. Something inside me couldn’t handle that — so I bargained.

“What if I wrap it up for you? Will you not throw it away?” I asked Jonathan*, the fishmonger. He laughed. “And what am I going to do with ten pounds of halibut fillet? I don’t even like halibut!” he responded. “Well,” I said, feeling bold, “what would it take?”

After a few minutes of haggling, he presented his final offer: If I wrapped the fish, cleaned the fish case (off-the-clock), and bought everything left in the case, I could have the fish for 90% off. I immediately agreed.

“Wait, what are YOU going to do with ten-plus pounds of halibut fillet??” he asked, incredulously. I told him not to worry about it. When the time came, I clocked out, put on a mask and gloves (I’m allergic to the shellfish), and scrubbed the fish case. I figured a job well-done could lead to future bargains, so I went all-out. Thirty minutes later, I wrapped up my fish and took $267 worth of halibut home, instead of the groceries I’d planned.

Mom was more than a bit surprised, but was enthusiastic when I explained what had happened. Turns out my mom loved fish, and so did many of her family in the area. We had some very happy friends that weekend, and Mom was thrilled to be able to help them out. I explained to Mom that I wanted to make this a regular thing, and we crunched some numbers. There was no way we could afford it. I hit on another idea: if we were careful with accounts and numbers, we could buy the fish and then sell what we didn’t need to select friends and neighbors at 50–75% off. That way they still got a bargain, and we got our fish for free.

I started calling around to some trusted friends and we made our network. The next time Jonathan didn’t want to clean the fish case, I was ready. It soon became a pretty regular thing. While I didn’t love fish, I was in culinary school and was able to arrange to take my fish and seafood class during that time. We “rescued” thousands of dollars’ worth of seafood in those 5 months.

While it turned into a huge benefit for my family, this “fish-case fiasco” never should have happened. There was a combination of many factors at play, some more obvious than others: cultural expectations, including instant gratification and impulse buying, rather than planning or ordering ahead, leading to a lack of a pre-sale structure for grocers; overabundance, resulting in too much fish being ordered, just to have a large fish case that looked “full” (a full case sells better); and variety, where people expect lots of different kinds of food/fish to be available at any time, leading to more being purchased overall by retailers. We have a generation of people out-of-touch with seasonality and geographical boundaries of cuisine, leading to massive amounts of fresh fish shipped express to the Utah desert, and a culture of convenience, where throwing fish away was preferrable to spending the extra minutes wrapping it up. There are more drivers, but these are a few.

Perhaps the biggest invisible culprit is that America has developed a culture of quality without educational backing: we want the best and the finest, but we don’t always know what that is, especially when it comes to food. Additionally, we want to eat luxuries as staples and sideline traditional staple foods. The world as a whole is leaning in this direction.

This can change. If we are to meet Target 12.3, it has to change. We may need to focus on adult behaviors in the short-term, but accurate education of coming generations is key for successfully rebalancing our planet. As the old adage goes, “Give a man a fish, he’ll eat for a day; teach a man to fish, he’ll eat for a while and then take shortcuts and ruin the system. Teach a man to love to fish, and he will find a way to keep fishing for a lifetime, teach his children sustainable practices, and become a functional part of the world’s ecosystem instead of destroying it for profit.”

And he might even stop overstocking the fish case.