The Gastronomy Program is pleased to announce that the first program in the Spring 2021 Pépin Lecture Series in Food Studies & Gastronomy will feature Gastronomy Program alumna Emily J. H. Contois (MLA 2013), speaking on her recently published book, Diners, Dudes & Diets: How Gender and Power Collide in Food Media and Culture. 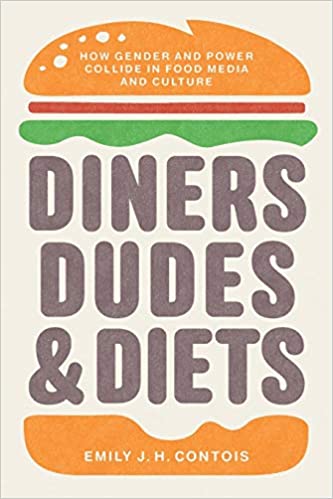 The phrase “dude food” likely brings to mind a range of images: burgers stacked impossibly high with an assortment of toppings that were themselves once considered a meal; crazed sports fans demolishing plates of radioactively hot wings; barbecued or bacon-wrapped . . . anything. But there is much more to the phenomenon of dude food than what’s on the plate. This provocative book begins with the dude himself—a man who retains a degree of masculine privilege but doesn’t meet traditional standards of economic and social success or manly self-control. In the Great Recession’s aftermath, dude masculinity collided with food producers and marketers desperate to find new customers. The result was a wave of new diet sodas and yogurts marketed with dude-friendly stereotypes, a transformation of food media, and weight loss programs just for guys.

In a work brimming with fresh insights about contemporary American food media and culture, Contois shows how the gendered world of food production and consumption has influenced the way we eat and how food itself is central to the contest over our identities.

Emily J.H. Contois is an Assistant Professor of Media Studies at The University of Tulsa. Her research and writing span the breadth of food, health, and identity in popular culture and media. She has appeared on CBS This Morning, BBC Ideas, and Ugly Delicious with David Chang on Netflix. She earned her PhD in American studies at Brown University and holds master’s degrees in public health from UC Berkeley and gastronomy from Boston University. She lives in Tulsa with her husband and their rescue pup, Raven.

Note: anyone interested in purchasing a copy of Diners, Dudes & Diets from UNC Press can get a 40% discount using code 01DAH40.