Students in Cookbooks and History (MET ML 630), directed by Dr. Karen Metheny, researched and recreated a historical recipe to share with the class. They were instructed to note the challenges they faced, as well as define why they selected their recipe and why it appealed to them. Here is the next essay in this series, written by Christina Grace Setio. 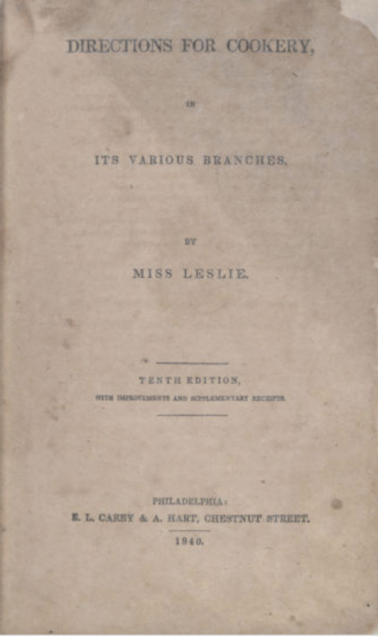 In the MET ML 630 Cookbooks and History class, we attempted to recreate a single or multiple historical recipes that are at least over a hundred years old. This project allowed for a hands-on historical analysis on the cooking production and consumption of that particular period of time. I chose an 1840 beefsteak pie recipe from a cookbook titled Direction for Cookery, in its Various Branches authored by Ms. Eliza Leslie. I accessed the digital version of the 10th edition copy where it was originally published in Philadelphia by E.L. Carey & A. Hart. Ms. Leslie was a decorated author of her time, and I find her writing style to be rather detailed and organized for an 1800 domestic cookbook. In the preface of her cookbook she has clearly stated her objective of providing American housewives with recipes adapted to the local produce and economy. She has also included measurement conversions and butchery diagram charts to aid even the most inexperienced cook.

I have always been intrigued by the built and flavor composition of old fashioned American pies. Although I wanted to choose something palatable enough for modern taste buds, I also wanted to be surprised by the outcome of this recipe recreation project. Because of the current pandemic, I had to keep in mind the accessibility of procuring the ingredients within potential recipes. When I found the beefsteak pie recipe (1840, 77), I was immediately intrigued by the idea of fusing the flavor of beef and oysters in a pie. 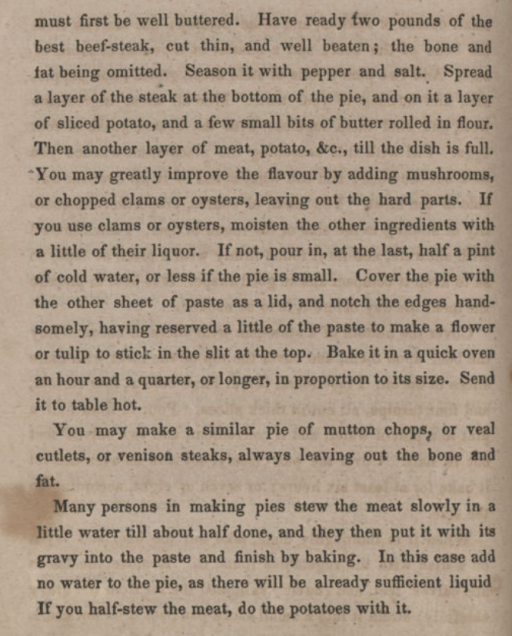 The first challenge arose in determining the exact ingredient variety that was available or commonly used in 1840 America. As an example, the recipe for making the pie crust simply states “Make a good paste [pastry] in the proportion of a pound of butter to two pounds of sifted flour” (1840, 77). For a modern housewife, one might have endless choice of what that flour may be: bleached pastry flour, whole wheat flour, all-purpose flour, or even gluten-free flour. However in 1840, half of those flour may not even have existed or been available to the general public. Historically, whole wheat kernels must be ground using a millstone to obtain wheat flour (Campbell 2007). Since the bran, endosperm, and germ of the kernels are all ground up together, it would most resemble what we today know as whole wheat flour. Refined white flour was only available after the invention of roller mills in 1870s, thus for this recipe refined flours will not give us an accurate flavor and character. Measurement could equally be a common issue when attempting an older recipe, as old cookbooks may use different terms and also standardization was common only after the 1900s. This savory beefsteak recipe was no different, I had no exact amount to follow with some of the ingredients within the pie. Finally the materials available in an 1840 kitchen vary greatly to what we find in a 2020 kitchen. It was extremely challenging to escape the convenience of relying on industrialized produce like plastic cling wrap, a meat pounder, or a pastry brush. 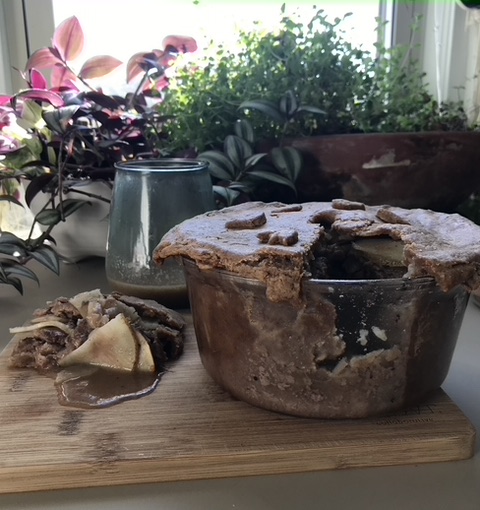 The beefsteak pie turned out better than expected; although not visually as appealing as I had hoped, the oysters gave it more character. The idea of recreating a historical recipe seems intimidating at first, however it proves to be an exciting way to learn about the past. Not only are we are able to visualize how food may have been produced, engaging all of our senses allows for a fully submersive experience. Next project, Mrs. Seely’s Colonial Codfish Pie!