Here’s another post in our series from Dr. Karen Metheny’s Anthropology of Food class, by Gastronomy student David Ginivisian. 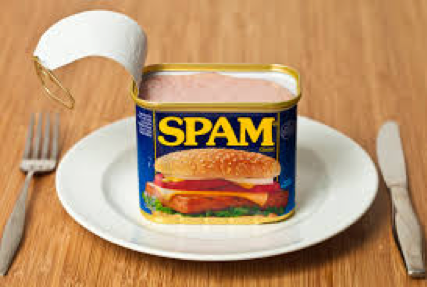 SPAM.  When discussing canned meats, SPAM is arguably in a class by itself.  Introduced domestically in 1939 as a convenient and affordable food, it has risen to an unlikely iconic status. 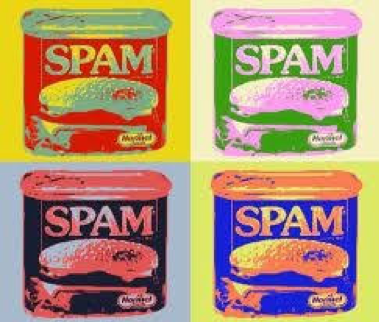 The recognizable cans stacked on market shelves evoke a Warholian image. While there are other canned meats, SPAM reigns supreme over this legion of processed proteins. The option to purchase a shelf-stable meat product is beneficial, especially in our current state, offering both economical and nutritional value. Recent sequestering has led to many of us having extra time to cook at home while becoming more resourceful and creative in the kitchen. With pantries being stocked throughout the world for the potential long haul, the crisis provides opportunity for its continued culinary ascent in popularity. 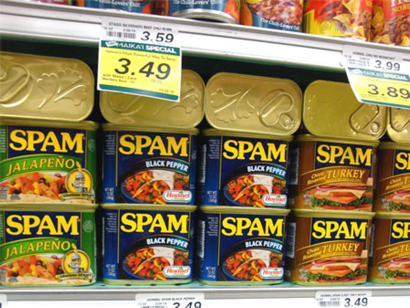 The history of SPAM reveals a wondrous, almost unimaginable tale, traversing the globe with the U.S. WWII armed forces. And just like it provided valuable nutrition for the U.S. G.I.s, SPAM is, once again, at the ready to help get through this current world crisis. With over 15 variations, this spiced pork product, with global reach, is now welcomed into the cupboards and cultures of 44 countries. 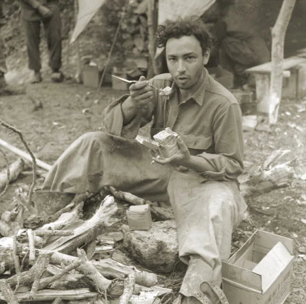 Worldwide interest and creative marketing have given SPAM a life of its own, well beyond the shelfspace in global supermarkets. In addition to the multiple varieties, there is merchandise, memorabilia, and subculture with a vast interest for all things SPAM. Certainly, SPAM is not the only food with its own product branding strategy, Instagram account or annual street festival, but how many canned goods can you name that have a boulevard named after them? Or their own museum?

It is rare for such attention and hoopla to be associated with a convenience food. Despite its notoriety, versatility and popularity, SPAM is decidedly not for everyone. I am on the side of the latter. Never a staple in my Mother’s kitchen, I can only recall sampling the product once.  My college roommate was a big fan. Spurred on by his high praise, I tried it sliced and seared in a sandwich. Meh. Never since has there been a desire, need, or reason for me to include it in a recipe or meal.

While I can appreciate that this canned cube of six simple ingredients is a “go-to” for millions, I just don’t have a use for it. From my perspective as an outsider, SPAM is never the main focus of a recipe. Really a bit player that hijacks existing classics, it is forever attempting to insert itself into the lead role but never able to upstage an original. The plethora of international SPAM recipes including tacos, gyros, sushi is exhausting. All the while, this ingredient hides behind other, more interesting and appealing ingredients – an imposter of other, more legitimate foods.  For example, would anyone consider a SPAM-LT to be a true substitute for a BLT?  Akin to tofu replacing meat in a vegetarian recipe, SPAM has also oddly become a meat substitute. Seldom uttered in the same breath, does this improbable pair of proteins share more similarity than previously considered? 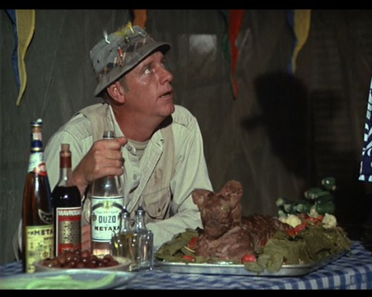 I have two SPAM memories related to 1970s American pop culture. The first is from of an episode of M*A*S*H. In this television dramedy about life in a Korean war U.S. hospital camp, Hawkeye, played by Alan Alda, creates a “SPAM lamb” in order to spare a real lamb from being served as the main course for an Easter mess hall dinner with a unit of  Greek soldiers. Though I hadn’t noticed when watching reruns as a teen, I now see the producers had the ‘lamb’ set upon a tray of grape leaves next to a bottle of Ouzo and other Greek liquors. 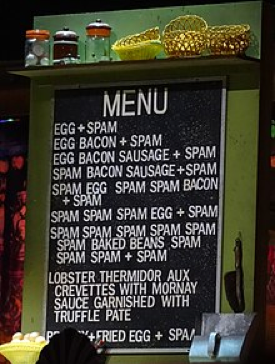 The second memory is the one made famous by the Monty Python Sketch, aptly titled SPAM. This skit is a must-see glimpse into the comic brilliance of this troupe of British wits. Interestingly, the repeated Vikings’ chants of Spam, spam, spam, spam…. have been credited as the influence for the commonplace use of the word SPAM as reference to junk emails.

As homage to the irreverent three and a half minute performance, I submit the following recipe:

Please enjoy the famously funny skit and credits from the 25th episode of Month Python’s Flying Circus, which first aired on December 15, 1970.