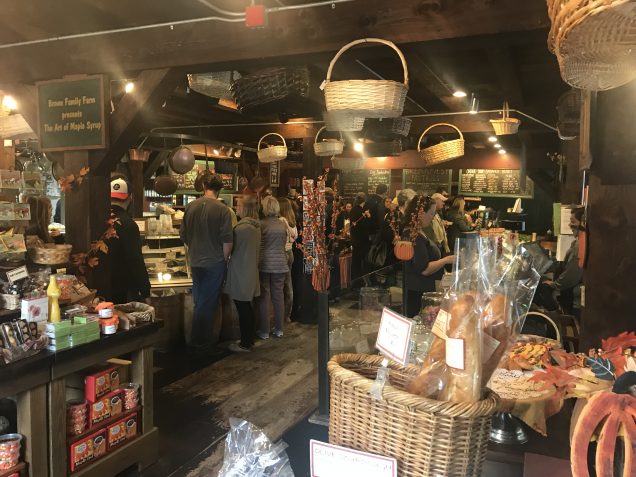 If you’ve gone to southern Vermont to leaf peep, pick up lunch and then some at the Vermont Country Deli in Brattleboro.  Inside the red barn you’ll find an expansive menu of prepared foods and made-to-order sandwiches, as well as a treasure trove of food souvenirs. The cozy scent of molasses cookies and the calls of order-taking fill the air.  Jaunty baskets and worn copper pots hang from the ceiling, and the requisite array of maple products appear at every turn.

This self-consciously country country store has decorative gourds displayed on an antique wooden wagon, and red gingham curtains hung around the base of every wooden table. Hand-written chalkboard signs announce the specials and sandwiches of the day, along with the WiFi name and password. Warm lighting makes the room feel as cozy as a mug of the self-serve coffee poured in front of a brick bread oven. It’s a tourist’s dream with the feel of a local’s hub.

As soon as you walk in, you’ll be greeted by a heap of dinner-plate-sized cookies (they must be the source of the brown butter you’ve smelled from the parking lot). Before you reach the deli counter, you wend through displays of every imaginable maple product: cotton candy, pepper, popcorn, lip balm, fudge, and, of course, the syrup itself in jugs, jars, and cans. 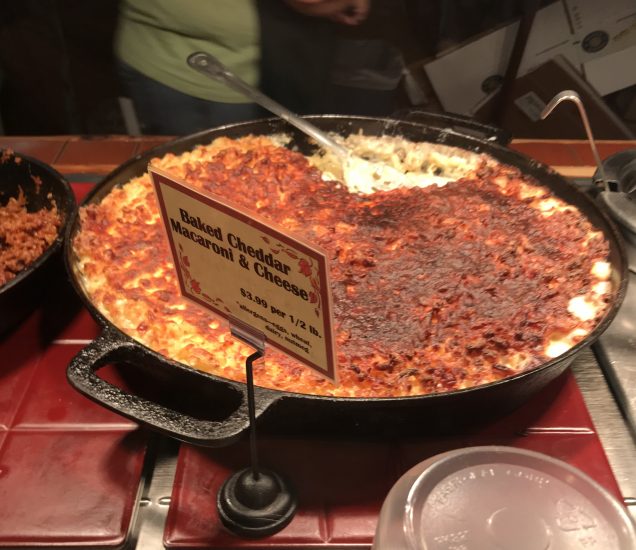 The line for the deli counter snakes around the corner (which helpfully gives you a chance to peruse the small but intriguing cider, craft beer, and local wine selections) and nearly every customer in line orders Baked Cheddar Macaroni & Cheese.  Follow their lead. Made with local Vermont cheddar and broiled in a two-foot diameter cast iron skillet, the mac & cheese is the signature dish, and it’s easy to believe the posted sign that in 2017, the shop sold 44,000 pounds of the stuff: “That’s 22 tons… Or, 6 Full Grown Elephants,” it reads. This classic comfort dish is satisfying with brightly sharp cheddar and a smoky, crunchy top from the broiler.

Prepared salads and ready-made side dishes also fill the deli case, ranging from burritos to a Super-Food Slaw, from samosas to tabouli salad. Some are made in-house and some are prepared by other local establishments, but the breadth of dishes ensures that all tasters have options.

The main attraction for the lunch crowd is the “Road Food” counter, with signature sandwiches named after area roadways.  At what looks like a standard deli counter come sandwiches with local cheddar on house-baked bread (top pick: the sourdough) to make them superlative.  If you pop in when the maple-barbecue pulled pork is on offer, don’t pass it up; it’s loaded with a sweet, cool slaw and, of course, local cheddar. The soft and smoky sweet BBQ is secured in a sturdy brioche bun and wrapped in satisfyingly thick butcher paper (for the brief moments you hold out until tearing into it, that is) and thoughtfully accompanied by a moist towelette.  You won’t be able to resist taking home one of the eight fruit pies cooling on the countertop, or snagging a loaf of freshly-baked bread (either would be a sure bet for making friends at home).

These sandwiches, salads, cookies, and pies are best enjoyed beside the rushing Whetstone Brook along the shop’s patio, or as an ethereal picnic a few steps away at the Creamery Covered Bridge.  It’s enough to make you forgive the endless maple displays.