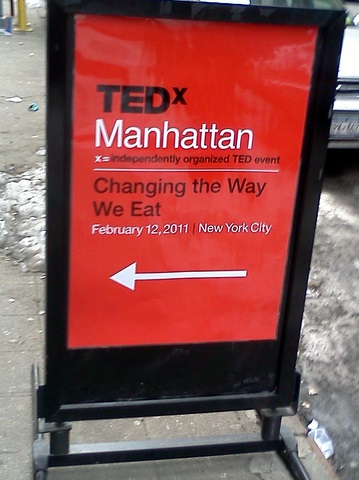 The TEDx Manhattan “Changing the Way We Eat” conference was an assault on the senses. Music was heard, experts were seen, and food was tasted and touched. I was thrilled and excited to attend the conference in person, but I didn’t know what to expect other than a “TED” style of learning. The event focused on sustainable food and farming, with the goal of creating new connections and collaborations across various disciplines (academia, restaurants, writers, farmers, and researchers).

Stepping into the Prince George Ballroom, gilded chairs were set in tightly packed rows forcing a bit of networking and creating a sense of intimacy for participants and presenters. The conference’s main organizer, Diane Hatz of The Glynwood Institute for Sustainable Food & Farming, opened the conference with some TED house rules: turn all technology off, be open to the possibilities of new ideas and people, and have fun. The program kicked off with ETHEL, a three-piece string “house band” performing a portion of Coldplay’s “Viva la Vida”.

The day was divided into three parts: what happened, where are we, and where are we going. In total, 22 speakers delivered powerful and thought-provoking messages in rapid succession. No lengthy introductions, and no question-and-answer session from the audience. Each speaker had the spotlight for 10-15 minutes. Distilling all the information from the 22 presenters was difficult to do. Below are three presenters, one from each session, who delivered something I found innovative, remarkable, and actionable.

Click to read more about the speakers (and food) that left a lasting impression on Emily.

Karen and her family live in the farmland of central Illinois. A factory farm moved next door to her home. Along with her neighbors, she formed a group called FARM (Families Against Rural Mess) to protest and organize against the factory’s constant messes and other hidden externalities. Her work received media and government attention that uncovered the “stinking” issues behind animal agriculture practices.

“Where are we?” session

Ian opened his presentation with a short video showing the audience his alternative method of urban agriculture: his grandfather’s Dodge pick-up truck that he converted into a 40-squarefoot garden by implementing existing green roof technologies. His Brooklyn-based truck has attracted chefs as well as young urban dwellers (known as kids) to his project. He partnered with local schools asking schoolchildren to reimagine urban agriculture. Ian has grown enough produce to start a modest CSA for $20 a share.

“Where are we going?” session

Curt was the only presenter who did not use any multi-media to support his presentation. Just a man, a stage, and a microphone. He discussed John F. Kennedy’s creation of the Peace Corps, an organization that celebrates its fiftieth anniversary this year. Curt modeled Food Corps after the Peace Corps with the hope that young people will want to spend a year working towards school food public service. Curt believes that school food is where it all begins, and that cafeterias should be transformed into health food venues.

Of course, attending a conference about food means exceptional meals. With all these wonderful ideas and conversations, brain power foods were much appreciated. Meals were coordinated by the Cleaver Company, with a simple spread of whole grain breads and savory biscuits for breakfast, baskets of apples available all day, and plentiful hot beverages and fresh fruit juices. The lunch meal was an easy opportunity to insert a networking activity. Lunch bags, each holding five lunches, were assembled for five attendees to make introductions and talk about the conference and their individual focuses. I thoroughly enjoyed my roast beef sandwich with a most delicious salad of quinoa, black beans, and dried cranberries. Desserts from City Bakery were waiting in the ballroom’s foyer. An afternoon chocolate tasting with Vosges Chocolates was a welcome treat and surprise. The day concluded with a reception and the always-appreciated goodies bag of samples and magazines. My favorite takeaways were the Cleaver Company’s homemade marshmallows and Manhattan Edible Magazine. 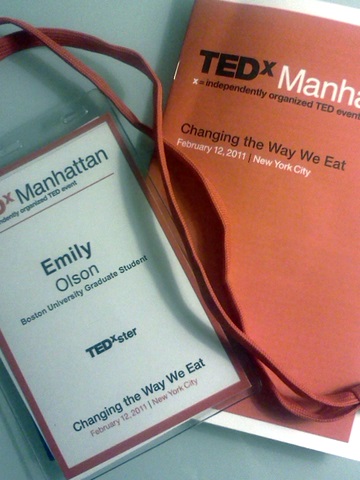 Leaving the event with a full stomach and a full brain, I felt very happy to have attended TEDxManhattan. There was lots of key learning and inspiration about the future of sustainable food. Based on follow-up emails from the Glynwood Institute, plans are underway for the 2012 conference. I would encourage anyone interested in sustainable food and farming to apply and become a TEDx-ster.

Emily Olson is a Gastronomy student. Keep up with her on her blog (whatemilycooks.com) and Twitter (@emilyolson80).