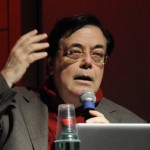 Marcello Piras is internationally known as an authority on black music, although his research extends beyond it. He has published a book on John Coltrane and essays for encyclopaedias, books & periodicals. His work includes translations of Gunther Schuller’s Early Jazz and The Swing Era and record liner notes and also developing a new method for jazz structural analysis. He has held masterclasses on performance practice and lectured in Italy, Germany, USA, Canada, Mexico, and Brazil. By 2001-2002, he worked at the Center for Black Music Research, Chicago, and at the University of Michigan, as Executive Editor of the MUSA series. He currently lives in Mexico, studying the black influence on Baroque music and writing a work on Afrocentric music history from Stone Age to present – integrating palaeontology, evolutionism, human brain phylogenesis, linguistics, and archaeology.

Although Mexico’s musical history is the richest, longest and best documented in the New World, “the” Mexican music the world knows mostly comes from a short period, ca. late 19th – early 20th century. While such compositions as Cielito lindo (1882), Sobre las olas (1888) and Estrellita (1912) were winning international success, music in the USA was in transition from an era of obscurity to a golden age. No wonder that Mexican musicians, specially when touring the USA, were being revered by many Northern colleagues. In the 1890’s, young Scott Joplin was wrestling to master the language of white American genteel music and turn it into a distinctly Negro idiom—a problem still quite new for the USA, but not at all new in the Spanish-­‐speaking world. Joplin soon found that Latin musicians were ahead of him in many respects and could be sources of effective musical solutions. This fact — so far overlooked by ragtime research — is documented in Joplin’s music, which, surprisingly, hides entire strains virtually lifted from Mexican compositions.