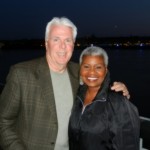 Connie Fredericks-Malone brings 35 years of experience in the fields of visual and performing arts, communications, arts management and marketing to her dual positions as Managing Member of CDF Music Legacy (2002) and Director of the Carole D. Fredericks Foundation (2006).  She is the sister of Taj Mahal and the late Carole Fredericks. In 2008 she was the co-curator of the Springfield Museums’ multi-media exhibition, BLUES IN OUR BLOOD: The Artistic Evolution of Carole Fredericks and Taj Mahal. Connie has presented workshops both nationally and internationally.

James F. Malone, Ph.D. has been a teacher, counselor educator and college-career readiness counselor for 45 years. Jim has assisted thousands of students and clients at various stages in their career-educational development to make solid career planning decisions. He brings to the work of the Carole Fredericks Foundation a unique blend of familiarity with the study of foreign language and the counseling skills to motivate students towards establishing meaningful career goals. Jim has consulted with a variety of institutions and has published and presented both nationally and internationally.

Talk Title: Blues in Our Blood: The Artistic Evolution and Musical Influence of Carole Fredericks and Taj Mahal

Carole Fredericks and Taj Mahal are two African-American artists who have had a significant influence on world cultures through their creative musical genius. Over the course of 22 years, vocalist Carole Fredericks wove American gospel, blues and rock n’ roll into popular French music. Composer, multi-instrumentalist and vocalist Taj Mahal’s 40 plus year career has broadened the scope of blues and root music to include West Africa, the Caribbean, Latin America, Europe and the Hawaiian Islands’ music. Fredericks and Mahal emerged from the multifaceted African-American experience with a love of music grounded in their origin. They both took refuge in music and found freedom of expression. They also shared a deeper more intimate bond in that they were brother and sister, the oldest son and youngest daughter of southern and West Indian parents, Mildred and Harry Fredericks.

Participants will explore the musical roots of the Fredericks family, social influences, personal challenges and those events which shaped the lives of these two artists and set them on the path to self-actualization through music and cultural exchange.

Carole Fredericks, The African American Chanteuse
Renowned vocalist Carole Fredericks was born into an African-American family with deep cultural roots in the Carolinas and West Indies.  Fredericks moved to Paris in 1979 to pursue her dream of a music career. Leaving her country behind but not her roots, she was rewarded with stunning success throughout Europe, Africa and Asia. Her sudden death in 2001 propelled her sister Connie Fredericks-Malone and American teachers of French to develop an innovative educational program that uses Fredericks’s spirited recordings to teach American children French.

Participants will explore the evolution of an artist, her origin and early experiences in Massachusetts and California and the path she chose to self-expression, self-actualization and artistic recognition in France and Africa.