This post from Gastronomy Student Altamash Gaziyani continues our series from students in Anthropology of Food.

As a food runner during a backed-up lunch service on the first Saturday of a new block, there’s not much I can do to help other than scrabble around, plucking tickets off the floor as they whizz out the machine unrelentingly, and scuffle against the wall, waiting for the floundering students to start putting plates up: the chef can though. Dwayne Lipuma famously shows no mercy when a single cog slides out of place from the ever-ticking, jewelled kitchen that is American Bounty; his prodigious skill and all round bad-assery in the kitchen are probably direct results of his years spent toiling in the industry and the disturbingly acute instincts and skills he’s developed over time. Today, it was overcooked beef that caught his eye. The hefty glaze of sauce wasn’t enough to hide the fact that the tenderloin was no longer blushing and rosy behind its veil; sauce was spattered across the plate like something from a street fair and the miserable brown-grey hunks of meat huddled in the center, the plate angled ‘cleverly’ in a desperate attempt to pass off the dud order.

He kicked into high gear immediately: with a single bellow, the students were cowering against their stations as he stormed down the line, all eyes trained on him. His hands were a busy, coordinated blur; his movements were perfectly coordinated; his eyes whizzed in their sockets as he barked orders and barked some more until they were carried out to his standards. He was absolutely savage, refusing to mince words or take the time to explain his actions—he knew just how long to baste the meat and flash the potatoes, just how much salt to flick into the wilted greens, exactly what order the components went on the plate. In the blink of an eye, we had nine plates of beef up and he continued toiling and raging away as the runners scurried to get the plates out. As I dashed out, I couldn’t help but shoot one last glance behind my back, watching him plate and cook simultaneously, and think that that was a man that knew exactly what impression he was making, and also how thoroughly he’d earned it.

I can’t stand it anymore. That pool house is tiny and quite unclean (which is a nicer way of saying its corners are grimier than a toad’s backside) and horribly stuffy during the Virginia summer. There’s barely enough room for one person to dash around and fire onion rings, flip burgers and toss salads for the horde of children swarming outside—I found myself stuck with two servers (who had the sense to bring portable fans) and Carlos. Good God, Carlos. He spent the all of prep chatting with the manager and then with a friend, regaling them with lurid stories about the busy services he’s endured in places “much more high quality” than this, leaving me to prep for about 350 people all by myself. He then proceeded to snatch the most difficult, ‘macho’ job—working the flat top and cooking pre-portioned, cookie-cutter patties of beef while trying to chat up Anu and Taylor, lolling by the front until we opened and rolling their eyes over and over in their skulls as he attempted flip after higher flip. When we were finally open, he swaggered up to the front window, bumping the two girls aside and handing plates to customers himself with a trollish grin as I let a continuous, steady stream of muttered swears flow while firing and plating…everything. Everything. I have no idea what he achieved today. All I know is that I hope for goodness sake that his cooking can keep up with his bravado tomorrow; that stuffy little kitchen is all his to work in (and scrub down) after he’s done inflating his ego some more overnight. 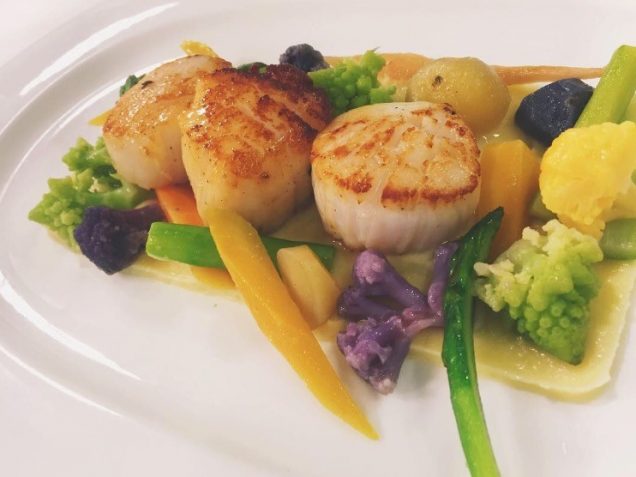 Sean and I have this system down. As an order comes in, he calls out to the other stations to coordinate times as I pour vegetables into different sauté pans over melted butter, ready to fire. When the order’s called, he drops the seafood and I begin picking up the sides, stirring smoked potato puree and basting leeks while he makes sure the scallops are perfectly burnished, the halibut achingly soft. We turn at the same time: I swish the puree across the flat plate, he places the scallops on and I start garnishing with vegetables like clockwork, while he positions the halibut and leeks in another bowl, waiting on me to pour the broth for the second dish. We walk up in perfect time to the pass, a plate in each hand, and set them down for Jasmine and Chef G to garnish, for the kitchen to keep the pace up with, for the customers watching eagerly from the window to admire. I can’t attest for him, but I can feel every single eye on the food as we walk back and see, ever so clearly in my mind’s eye, Chef G’s eyebrows raising unwillingly in surprise and pleasure. God, does recognition feel beautiful.

If I had to describe service tonight, I would call it unnecessary: it was an unnecessary, showy affair that Chef insisted on escalating into a cockfight between all the stations. I was demoted to make cupcake batter for the amenities we give our posh, prima-donna clientele and got to sit this one out, which meant I had a front-row seat to the catastrophe. It started off with a simple jab towards garde manger—the eager externs looking to establish their place in the new exec’s kitchen and earn his respect. “You guys wanna buck up that snail-pace there?”, he drawled, his icy-blue eyes flashing as he shot a roguish wink towards the ‘big guns’ on the hot line. The externs looked like they’d just been tasered, and began floundering in a desolate attempt to quicken service, pushing out niçoises and ceviches (with a certain lack of attention to detail). Chef’s head flicked instantly towards hot apps, as he began taunting the experienced line cooks for “letting the kids thrash” them. I saw several scowls burst across faces and fists clench as they hopped to and began veritably flinging plates at servers while Chef sniggered at the pass.

I saw one extern slip across the floor and smash his forehead against the metal countertop, only to shake off the blinding pain and continue with tears in his eyes. I saw another on the verge of hysterics, bleating incessantly for his partner to buck up as he toiled to keep up with Chef’s demand. I saw one line cook sweating buckets into his sauté pans, his mouth an imperceptible line and a frown scratched across his face, and another pair snapping at each other to keep up with the demand. I saw everybody trying to please the horrible ringleader, dancing along like circus animals to his tune for the fear of feeling his whip, and turned right back around. The cupcake batter deserved more attention than that rigmarole.

The clock kept ticking. The risotto was ready, I’d just mounted it with enough butter and pecorino cheese to bring a grown man to his knees—it was good too, if I may say so. I had the prawn skewers all ready to go for people as they walked in; the powerful aromas of honeyed, roasted garlic, and nutty-brow butter that had imbued the shrimp were permeating the house. The pie was ready too: plump and bursting at the seams with lamb and sauce (lamb that cost me a fortune and was probably why I now had no money, but hey, it was worth it). I’d even gotten the cake into the fridge to set; a giant, Oreo-cookie-crusted spectacle, resplendent with fudge crumbs and vanilla ice cream to go with it. As I wiped rivulets of sweat trickling down my forehead, I sat patiently, staring at the door, waited for the twenty-or-so people that had promised to show up for lunch to come. My cat nudged my ankle, her eyes round and anxious, but I gently pushed her aside; these people were bound to show any minute, I thought, and I needed to be ready. I needed to make an impression, because who was I, if I wasn’t the guy that cooked for everybody? The quiet, little boy with the awful fringe that sat in the front row and did everyone’s project assignments? Or the one who got asked to parties out of obligation and watched while everybody danced? No. That wasn’t me. That isn’t me. I can make miracles out of basic ingredients and coax flavours to life. I deserve to be recognized for what it is that I do for these people, for how much I care, even if I have to work harder and wait longer by the door with a plastic smile on my face.

Ten hours later, after I’d poured all my food (minus enough for dinner) into the trash and carried it out myself, weeping senselessly as I stumbled down the stairs and into my pillow at night, the clock kept ticking.