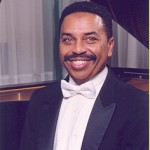 Richard Alston is a masterful pianist, having appeared as a soloist and in recitals with orchestras throughout the United States and Europe. After earning both his Bachelor’s and Master’s degrees from the Juilliard School of Music, Richard was poised for a career in both classical piano performance as well as performing arts education. His performance credits range from recitals, guest soloist with orchestras, live opera to radio and television broadcasts as well as CD recordings. Prof. Alston is currently pursuing a Doctor of Musical Arts degree at Mason Gross School of the Arts, Rutgers University, New Brunswick, NJ. His teacher and coach is Prof. Paul Hoffmann.

“Troubled Water” Margaret Bonds (1913-1972) – This is a piano transcription of the Negro spiritual “Wade in the Water,” coded with two meanings (for slave owner and slave). It is composed in the 19th century style of the piano transcription that was used by Franz Liszt.

“Adagio in F Minor Chevalier de Saint George (1745-1799) – This is a richly expressive work in the tradition of Haydn and Scarlatti.

“Valse” Billy Strayhorn (1915-1967) – This classical piece was composed by Strayhorn when he was only 15. He would later go on collaborate with Duke Ellington and compose great jazz compositions.

“Fantasie Negre” Florence Price (1887-1953) – Composed in 1929, this is a piano transcription of the spiritual “Sinner Please Don’t Let This Harvest Pass.” It is composed in the 19th century style of the piano transcription that was used by Franz Liszt and dedicated to Price’s student Margaret Bonds.