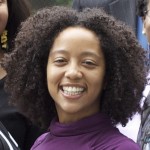 Genithia L. Hogges is a teacher and musician who has earned an A.B. in Literature and an Ed.M. in Arts in Education from Harvard University. She also holds an M.A. in Music with a specialization in historical musicology from Boston University. For over a decade, her research has crossed disciplinary lines examining both music and literature as cultural and historical documents, especially in instances of systematic oppression. Genithia has taught English, Spanish and a variety of music courses ranging from general music to instrumental and vocal ensembles at the pre-kindergarten to college levels. She has also conducted church and community choirs. As a workshop facilitator and classroom teacher, Genithia has specialized in courses related to the African-American sacred music tradition for Massachusetts’ public and private schools in Boston, Newton and Lynn.

Talk Title: Over My Head, I Hear Music in the Air: The Strength and Song of the Slaves

When the first Africans were brought to Jamestown in 1619, many before them had already been taken by force to the so-called New World, where they melded the music of the colonizer with their own musical traditions. Yet the Negro Spiritual, forged in the fires of British imperialism and the birth of a nation at cross-purposes with its own ideals, possessed characteristics that set it apart as an entirely new musical invention. Did music play a role as millions of enslaved Africans and American Blacks overcame constant, horrific attacks on their personhood, bodies, families and identity? Was art a refuge and strength as they struggled for freedom for nearly two and a half centuries, then sought peaceful co-existence rather than violent retaliation after emancipation? In a society whose laws and customs were combined unequivocally to reject Black Americans as humans and citizens, the Negro Spiritual was a means of teaching and remembering their true identity. It was no ordinary strength that sang “Before I’ll be a slave, I’ll be buried in my grave and go home to my Lord and be free” or “Nobody knows the trouble I see. Glory, hallelujah”. Subsequent generations drew from this same well, as their nation repealed Reconstruction and allowed Jim Crow to terrorize the land. The slaves’ strength did not come from the songs yet their songs give us a glimpse into the refuge which enabled them to sing “Over my head, I hear music in the air. There must be a God somewhere”.