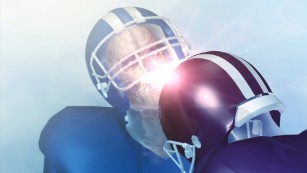 A new study out of the Boston University School of Medicine shows the first evidence of a genetic link to developing chronic traumatic encephalopathy (CTE). CTE is a neurodegenerative disease that may be diagnosed in patients with repeated head trauma. These patients typically exhibit cognitive and emotional issues including difficulty planning, emotional instability, substance abuse, impulsivity, and short-term memory loss. However, CTE can only be diagnosed postmortem, and there is currently no reliable way to predict who will develop this disorder.

This study, published in Acta Neuropathologica, is the first to show that there may be a genetic predisposition to developing CTE. Eighty-six brain samples from deceased American football players were examined for the presence of a missense mutation (rs3173615) in the TMEM106B gene. These players had all been diagnosed with CTE after their deaths. The mutation has been identified as playing a role in neuroinflammation and TDP-43 neurodegenerative diseases (such as ALS and Alzheimer’s). Thus, this specific mutation was of interest to researchers, who have been trying to find a possible genetic basis for the development of CTE.

Researchers identified that those diagnosed with CTE were more likely to have the missense mutation (rs3173615) on the TMEM106B gene than those without the disease. They also found that those with this gene variant were 2.5 more likely to have developed dementia. Researchers found that the presence of rs3173615 was associated with synaptic loss, dementia, and density of abnormal tau protein. However, these results were only seen when analyzing the brains of those diagnosed with CTE.

When compared to case-controls, the same associations were not observed. This study is the first to identify a possible genetic link to the development of CTE. The actual applicability of this study is limited, but it does provide possible paths for future research into the causes of CTE. There are likely to be many genes that contribute to the development of CTE, and as such, further research is needed. It is possible that this research could lead to preventative measures, diagnostic methods, and treatment of CTE; all of which are extremely limited as of now. CTE has been a popular topic in the news recently, with evidence accumulating that links head trauma from contact sports to CTE-like symptoms. A Boston University study in 2017 found that 99% of former NFL players’ brains that were studied showed signs of CTE. Evidence has also been produced to show that playing contact sports as a minor may contribute to cognitive deficits later in life. Studies like these have led to some arguing that contact sports (especially football) need to be altered to mitigate the risk of head trauma. Such alterations may include better helmets or rule changes. Some have even argued that children should not play football because of the risk of future brain trauma may be too great. More studies like this one are needed to assess the validity of these arguments, but in the meantime, these studies have ignited the debate around contact sports.