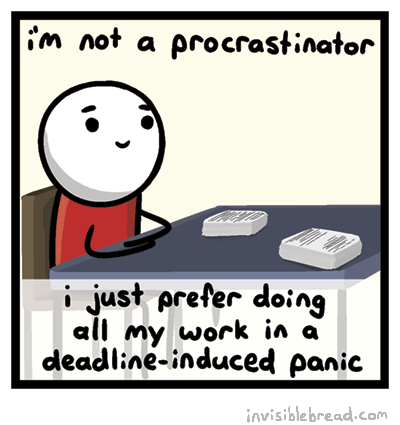 Cramming. For one reason or another, be it poor time management or laziness, we’ve all pretty much done it at some point in our lives. Yes, it’s wrong and doesn’t really help to prepare well for tests, but have you ever considered why that is the case? What exactly is it about cramming that doesn’t quite agree with the brain and just ends up hurting test performance?

Cramming involves trying to memorize as much information as possible while only actually being able to encode some of the information as short-term memory. Whatever important material you’ve tried to memorize you will likely only be able to recognize and not recall because the information being encoded only includes surface level features. An example of this phenomenon would be rereading your notes: sensory areas of the brain such as the visual cortex will process the information and help you recognize what your notes look like, but other brain areas such as the frontal cortex and temporal lobe responsible for reconstructing a memory of the actual material which can then be recalled will not be active. On the other hand, long term memory encoding requires meaningful analysis of information as well as enough time to study to adequately process all the information you wish to store. Rewriting notes to make sense of them and constructing diagrams or pictures to relate different concepts are useful methods for creating a longer-lasting memory in your head – provided you do so well in advance, of course.

Another important problem to note about cramming is that it can interfere with the amount of sleep you get. Why is it important to be well-rested before an exam? Sleep, as it turns out, is vital for memory consolidation, a process where a short-term memory is stabilized into a long-term one as features of that memory become more connected. The hippocampus has been associated with memory consolidation: studies involving mice learning how to navigate mazes show that mice hippocampal neurons are active as they learn the maze and are actually reactivated during sleep, and this reactivation has been associated with strengthening of the new connections. What does all this mean? In the case where you have to choose between staying up all night to memorize as much information as you can and getting a good night’s sleep, choose getting a good night’s sleep. You won’t regret it.

Revising for exams – why cramming the night before rarely works