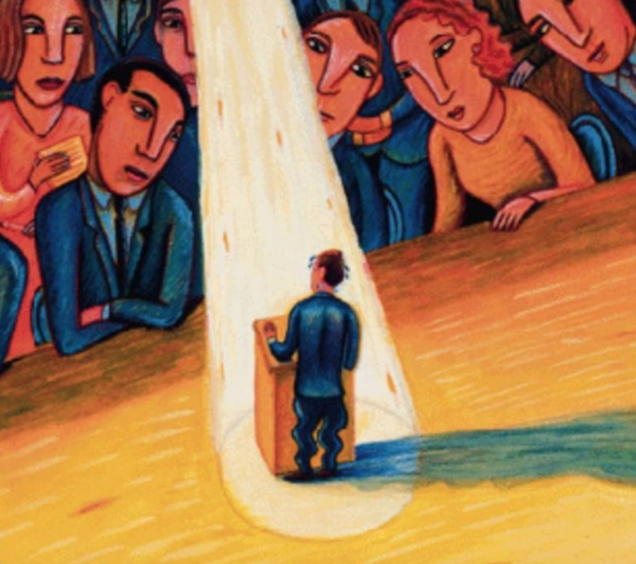 Those who suffer from glossophobia tend to experience the classic fight or flight response when speaking in front of a group, even if the group only consists of a few people. They may tremble, sweat, freeze, and so on. As their brains release adrenaline and steroids, their blood sugar levels and heart rates increase. The symptoms are not necessarily limited to during a public speaking event; they can also happen prior to the event, that is, when it is anticipated. While glossophobic people may know that this fear is irrational, they have the least amount of power in controlling their feelings.

The exact cause of glossophobia is still unclear. However, genetic factors often play a huge role. Like many other phobias, glossophobia is more common in people who carry the corresponding characteristic from their families. Individuals with a family history of glossophobia or any similar fear may exhibit the symptoms when the fearful gene is activated. Certain traumatic events can also lead to glossophobia. You probably suffer from glossophobia and have a strong fear of being judged, embarrassed, or rejected because at some point in your life, you’ve experienced distressful situations, such as an unpleasant presentation you’ve given. Such events might not appear intense when they occur, but they can have a long-lasting impact. Another possible factor is education. Less educated people in general are more likely to feel uncomfortable with taking the stage. In one poll, 52% of respondents with a high school diploma or less expressed a fear of public speaking, compared to only 24% of college graduates. The consequence is that a glossophobic person is likely to deliberately avoid any public speaking scenarios.

Fear of Public Speaking Statistics and How to Overcome Glossophobia

Do You Suffer from Glossophobia?