Huntington’s disease (HD) is a neurodegenerative disorder that slowly diminishes one’s ability to walk, talk, and reason until eventually control is completely lost. HD is an autosomal dominant genetic disorder, so everyone who carries the gene is guaranteed to develop the disease and will have a 50% chance of passing it on. Currently, there is no cure for this devastating disease, and most die within 10-20 years after onset.

With no treatment or way to stop the progression of HD, the outlook of those diagnosed has seemed pretty bleak. Until now. A new clinical trial for an HD drug is set to enter Phase 1 in 2015. This drug is meant to target the source of HD itself: the Huntington gene. 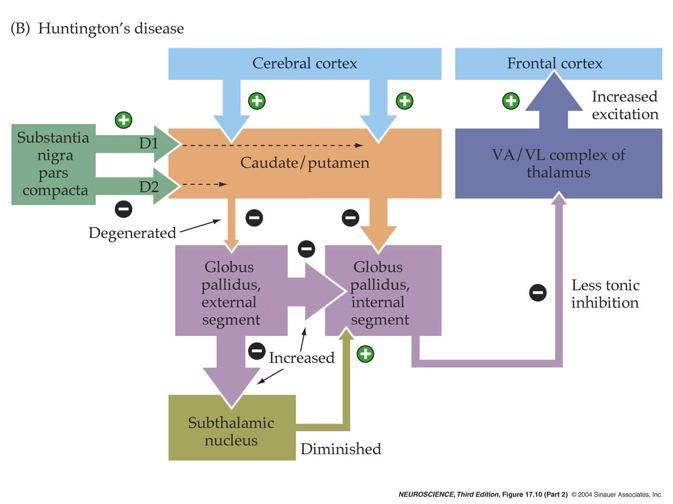 The Huntington gene is important for synapse formation in the cortex and striatum during early development. Mutation of this gene causes a decrease in dopamine by attacking the substantia nigra pars compacta of the striatum. This leads to degradation of the pathway of dopamine, an important neurotransmitter in controlling fine motor movement. The result of this degradation is hyperkinesis, or an increase in uncontrolled movement.

ASO-based drugs have been used in human brains before to treat other neurodegenerative diseases such as ALS and SMA without any reported safety issues. The injection of ASO-HTT-Rx into lab mice that model HD show improvements of their symptoms. The only risk with these types of drugs is that they must be delivered directly into the nervous system. Therefore, a dose of ASO-HTT-Rx must be injected directly into the lower spinal cord much like an epidural is delivered. There are a lot of risks associated with this type of injection, so this first phase of the drug trial is meant to focus on whether or not the drug is safe to administer to humans.

Once the drug has been deemed safe and an optimal dose has been found, the drug can progress to Phase II. If Phases II and III are successful, then the drug can be brought to the market. This is very exciting news because this is the first HD drug that targets the cause of the disease directly instead of treating the symptoms. The success of this drug can bring us closer to finding a definitive cure for HD and potentially other degenerative diseases.