So what exactly causes your body to freak out under pressure? The answer is the “fight or flight” response. The fight or flight response is produced by the sympathetic branch of the peripheral nervous system. When a threat is detected, a region of your brain called the amygdala sends a signal to release adrenaline in order to help you either run away from the threat or fight it off. This adrenaline causes heavy breathing, increased blood flow to the muscles, and loss of peripheral vision. While all of these would be helpful in a real life-threatening situation, it is quite the opposite of effective when trying to deal with work-related stress. Neither fighting nor fleeing is an appropriate response, so therefore your body is unable to get a release, causing you to freak out even further. 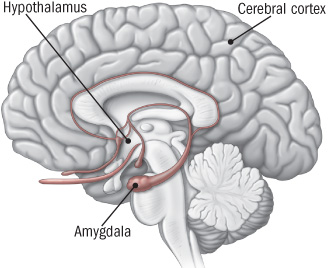 The hypothalamus & amygdala are responsible for signaling the body to release adrenaline, inducing the sympathetic “fight or flight” response

In order to calm yourself down from this freak out, you need to interrupt your body’s fight or flight response. It is possible to disrupt this signal from your amygdala by naming the emotions that you are currently experiencing. Jon Pratlett explains this by saying: “Reflecting on your feelings and labeling them may assist in calming the amygdala, allowing you to move out of the fight/flight mode and free up energy allowing you to think more clearly about the issue at hand, rather than worrying.”

Now that you understand the mechanisms of the fight or flight response and have told your brain that you are no longer experiencing a threat, it’s time to calm down your body. Taking slow, deep breaths will bring more oxygen into your lungs and bloodstream. This reverses the effects of the fight or flight response by “stimulating the opposing parasympathetic reaction”.

The final step in calming down is to re-label your negative emotions into positive ones. For example, if you were feeling worry or fear, you could replace these emotions with concern and anticipation. Doing so will convince your amygdala that your emotion are not threatening and therefore not in a fight or flight situation.
Once you’ve completed all of these steps, you should notice that your heartbeat has returned to a normal pace and your breathing has become regular – you have successfully calmed yourself down. Give this technique a little bit of practice and you’ll become the master of stress in no time. So the next time you have an exam, spend less time freaking out about it and more time acing it!