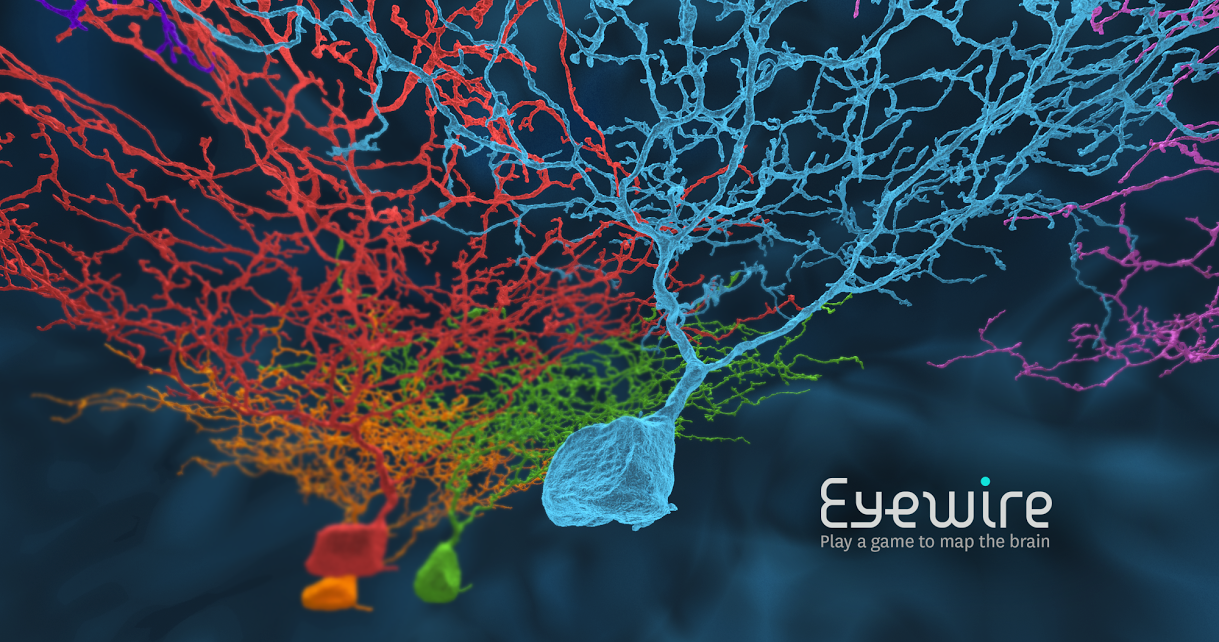 After the sample is imaged, the next step is identifying which part of this image is the target neuron. This is done using two methods, artificial intelligence and human intelligence. The Seung lab has developed technology that aptly identifies which part of the image is the target neuron or neurite (the branches of the neuron). Unfortunately, this AI is unable to completely map each image. This is where crowd participation is necessary. As seen in the image below, the AI begins mapping the neuron by filling a space in with dark blue. A human player then adds to what the AI missed, which could be a hole in the branch, extending the branch, or even a new branch completely. A player works through a cube, or a small section of neuron, by scrolling through each of the layers.  The artificial intelligence then “learns” how to complete a better model based off the human input. Each cube is traced by five to twenty-five participants before it becomes a validated model.

At the end of each week, a player’s performance is evaluated. Each cube they have completed, filled in with what the AI missed, is compared to what other players have filled in on the same cube. This method creates an “eyewire consensus” for each cube, allowing the program to rate players based on precision and recall. Precision is based on volume added correctly, or areas filled in, while recall is based on volume omitted, or areas that are not shaded. High precision would mean a player correctly fills in much of the area, and low would mean they have filled in areas that are not in agreement with the consensus. High recall would mean that the player missed a few of the correct shadings and low recall would mean the player missed many of the correct shadings. These scores are given to individual players so they are able to improve their personal performance.

The importance of crowd sourcing technology for research is becoming ever more evident. It typically takes the Seung lab about 50 hours to map a neuron. Given that there are an estimated 85 billion neurons in the brain, crowd sourcing is needed to speed up this process.  As of this August, Eyewire has mapped 26 cells completely. This low number is attributed to the focus the lab puts on accuracy. To reach this accomplishment, more than 70,000 people participated by completely over a million cubes.

Sign up here to help out with this extraordinary approach to human brain mapping:

EyeWire: A Game to Map the Brain

EyeWire: A videogame that recruits players to map the brain – Wired.co.uk