Stressed out? You may be at a higher risk for Alzheimer’s disease. You’re probably wondering to yourself how that is possible. Highly intelligent people who use their brains all of the time, like scientists, CEOs, and presidents, deal with stress on a day to day basis. The truth is that lack of higher education or brain activity is not the only major cause of dementia.

An Argentine research team examined 118 patients with Alzheimer’s disease and 81 healthy individuals whose age, gender, and educational level were comparable to the Alzheimer’s patients. Both groups were questioned about the amount of stress that they had faced in the past three years. The researchers reported that 72% of the Alzheimer’s patients admitted to coping with severe emotional stress or grief, such as the death of a loved one or financial problems. This was nearly three times as many as the control group.

Another study in Sweden followed over 800 women for about 40 years. At the beginning of the study, the individuals were interviewed about the psychological impact of common stressors. At each follow up visit, researchers recorded the symptoms of distress each woman had experienced. One in four of the women had experienced at least one stressful event, and one in five of them ended up developing dementia or Alzheimer’s disease.

So what is it about stress that triggers this cognitive decline? In response to stress, the body releases a hormone called Cortisol. This a healthy response that helps us deal with stress, but people who are faced with high levels of stress on a daily basis or over a long period of time will accumulate a large amount of Cortisol in their body. The build up of Cortisol leads to deposits of fat, especially in the abdominal area. Abdominal obesity is not only caused by alcohol and fast food; the build-up of Cortisol due to high levels of stress is a main cause of this belly fat.

Besides the obvious fact that excess fat is not good for your health, studies have shown that this abdominal weight can actually lead to memory loss and cognitive impairment. 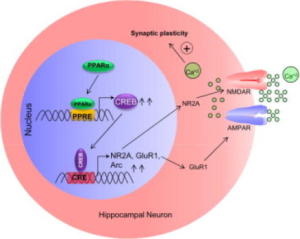 The CREB cycle, which is induced by PPARalpha, improves learning and memory

Neurological scientists from Rush University have found that Peroxisome proliferator-activated receptor (PPARalpha), the protein that controls fat metabolism in the liver, is also present in the hippocampus, which controls memory and learning. They found that injection of PPARalpha into mice improves their learning and memory. People with high abdominal fat levels are more likely to have lower metabolisms and therefore depleted levels of PPARalpha in the liver. This depletion eventually spreads to the entire body, causing decreased levels of PPARalpha in the brain. Studies show that PPARalpha induces the CREB cycle, which is known as the  master memory regulator. People who lose PPARalpha in the hippocampus may have decreases in CREB cycle activity in the brain and suffer from memory-related problems.

Since stress and obesity are high risk factors for dementia, it is important to find effective ways to minimize them. Exercising a few times a week and relaxing after a stressful day are small but effective ways to keep your brain in shape and prevent cognitive decline.