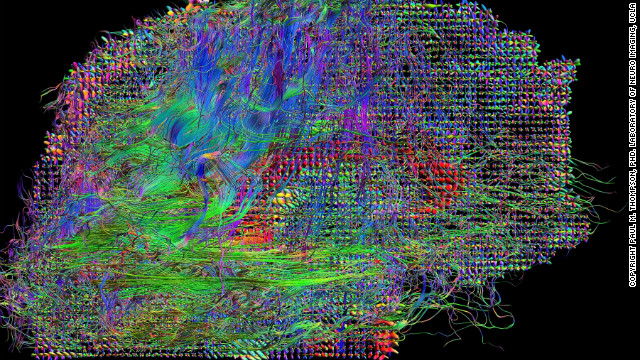 The diffusion-imaging scanner is built by Siemens, a German engineering company. It works by tracking water molecules as they travel through nerve fibers. This imaging technique results in a more precise picture of the brain’s neuronal pathways. Van J. Wedeen, director of Connectomics at the Martinos Center for Biomedical Imaging at Massachusetts General Hospital (MGH), explains how the scanner works. “The diffusion image is a map of the water diffusion which we then convert into a marker for the fiber pathways, we then reconstruct it through computer algorithms that explain the water diffusion that we have observed.”

The scanner looks just like an MRI machine, but the new technology inside enables it to produce images that are ten times clearer. “It’s the difference between looking at the bonnet (of a car) and looking at the gears and belts inside,” Van J. Wedeen says. The idea behind the new technique is to look at the brain relative to a coordinate system. The idea is akin to the difference in making a map with longitude and latitude versus without.

Wedeen and his colleague Bruce Rosen are excited about the potential data collected by this machine. Rosen, the director of the Martinos Center for Biological Imaging at MGH, sees the future of the scanner, saying “Over time, it’s clear that in addition to scanning normal volunteers, we’d be very interested in scanning patients with disease.  The tools we are developing, as well as many other scientists around the world mapping these brain circuits, may be fundamental to how we understand and conceptualize diseases and treat them. Once you understand that it’s an abnormality of specific circuits, it gives you clues in terms of the pharmacology you want to use depending on the part of the brain.”

Diseases like autism that are not well understood could be the result of abnormal brain connections called connectopathies, which could be more easily diagnosed with the knowledge provided by a connectome. Rosen hopes that eventually “we’ll be in a position to see if that’s true or not. And if it is, try to understand where it came from and try to fix it.”