Researchers have developed a technique that reconstructs the words patients are thinking of that could help locked-in or comatose patients communicate.

A newly developed computer model reconstructs the sounds of words that patients think of. Over the past few years, scientists have been coming closer to being able to listen in to our thoughts.  This study achieved that goal by implanting electrodes directly into patients’ brains. In an earlier 2011 study, test subjects with electrodes in their brains were able to move a cursor around a screen just by thinking of different vowel sounds. Another study, conducted in September of that year by Jack Gallant at the University of California, Berkeley, was able to guess images being thought of through functional magnetic resonance imaging (fMRI).

Brian Pasley of the University of California, Berkeley wanted to see “how far can we get in the auditory system by taking a very similar modelling approach” of stimulus reconstruction. His team focused on the superior temporal gyrus (STG) because not only is it part of the overall auditory pathway of the brain, but also because it is a higher-order brain region that makes linguistic sense out of sounds.

The team played audio of different speakers saying words and sentences to 15 patients with implanted electrodes and recorded brain waves from their STGs. To interpret all the electrical signals the audio enacted in patient’s brains, computer modelling was used to map out which parts of the brain were firing at what rate for each frequency. With help from this model, the researchers were able to guess what words patients were thinking of out of a select few presented to them. Turning the brain waves back into sound using this model enabled the researchers to reconstruct some of those words. 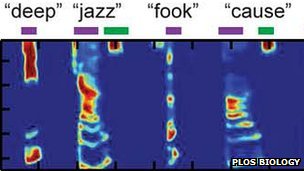 Some words and their STG reconstructions

As for where this work could lead, Robert Knight of UC Berkeley, senior author of the study said “from a prosthetic view, people who have speech disorders… could possibly have a prosthetic device when they can’t speak but they can imagine what they want to say.”

Mindy McCumber, a speech-language pathologist told BBC News that “The development of direct neuro-control over virtual or physical devices would revolutionise ‘augmentative and alternative communication’, and improve quality of life immensely for those who suffer from impaired communication skills or means.”

One Comment on Internal Voices Decoded by Scientists at UC Berkeley